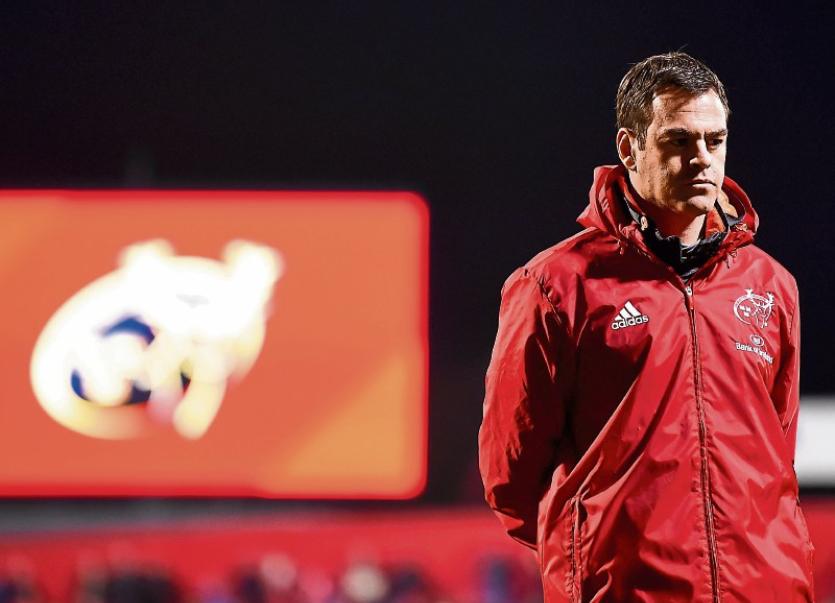 Johann who? The words of Munster fans when they found out who was to replace Rassie Erasmus as their new head coach midway through last season.

A quick Google and you could see that one of South Africa's ‘up and coming’ coaches was about to leave his role with the 'Springbok' and become a head coach for the very first time.

Van Graan had been an assistant coach at the Blue Bulls in Super rugby.

He had then moved on to be a coach with the national side. All standard really.

There was one line in there though, which peaked my interest.

Van Graan had spent time with the New England Patriots of the NFL and also had made trips to learn at the United States Military Academy, otherwise known as West Point.

I needed to know more and after a year of waiting, we finally sat down for a talk.

“I’ll start by going back to when I first started coaching,” van Graan opened with.

“I realised pretty quickly that you can’t just stay in your own environment otherwise you will stagnate. One of the deals that I made with myself, when I went into coaching full time at the end of 2003, is that I would spend time in another environment each year. Whether that would be at rugby clubs across the World or at rugby league teams. It didn’t really matter what environment (sport) or company. I made quite a few visits across the World to different places and it stimulated me so much.”

In 2011, van Graan planned a trip which would be life changing for him as a coach. The Bulls were on a high, but the thirst for knowledge and the will to win, meant that van Graan wanted to learn more and there was only one country to learn from.

“At the Bulls, I was lucky enough to be involved in a brilliant team that won the Super Rugby title three times in four years, while we also won the Currie Cup five times in that era.

“The Bulls had built a pretty special franchise in the Southern hemisphere at that time. After 2010, I said to the two coaches Heyneke Meyer and Frans Ludeke, I felt that we needed to take the next step.

“I felt that we needed to go to the USA. I thought they were so far ahead in certain areas of professional sport. I remember Frans and Heyneke saying to me “if you get everything done, we will find the money from the board to go and do it”.

Using contacts that he had built up in the sporting and corporate world, van Graan set off on a whistle stop tour of the United States.

The next stop on the trip was Boston, where the Red Sox and New England Patriots were next on the list of learning hubs for the soon to be head coach.

“From entering their facility to reading their story of how they moved to Foxborough and how they built Gillette Stadium. How they had a shopping mall there, how their training fields were set up there. Even down to how we were greeted. The whole organisation made a massive impression on me,” van Graan says of the Patriots.

The walls of meeting rooms in Munster's High performance centre are adorned with quotes from the Patriots' famous coach Bill Belichick.

The ‘take-aways’ from the trip are still to be seen in van Graan's every day work place.

“Bill Belichick is a coach I respect a lot. I have read a lot about him and his coaching style. There are certain things that stand out from the Partiots organisation, but you have to be able to learn from everybody.

“Sometimes I have been involved in situations where I have learned how ‘not’ to do things. That is the most important thing for me.

“You have to learn everyday. You have to take what you can from everyday and see how you can incorporate that knowledge into your system. You might change one or two ideas you have seen and incorporate them into your team environment.”

Learning everyday is something that Munster have tried to do since van Graan arrived. Another is to perform under pressure, in an environment where only winning matters.

It is that aspect of rugby, the winning mentality, that is most influenced for van Graan by the last stop on his 2011 trip - West Point.

“That was a very special place. In rugby, sometimes we can say, we are going to war. We face all of these challenges, but no one really ever experiences what the people in West Point have and will experience.

“I met some incredible people there and we spoke about how they train and how they develop their leaders and how they execute under pressure and how they keep their values intact.

“I have been back there two or three times since. They are an organisation that have impressed me so much. I learned so much from them.”

Learning on the job and sharing the leadership responsibility is something that can be seen in recent weeks from Munster.

Away to Ulster the side was led onto the field by Jaco Taute. The following week, against Leinster at Thomond Park, the side were led by CJ Stander, in the absence of squad captain Peter O'Mahony.

The ‘next man up’ mantra from American Football teams is something van Graan is trying to instill into his players.

“I said on the first week here, I didn’t know a lot of the players who were playing with Munster at the time. So I said, everybody starts on zero and it doesn’t matter what you have done before.”

The depth of a squad is something that van Graan places huge stock in.

“I have never seen a championship winning side that won with just 15 players or 23 players. You need everybody involved and I believe that is how you create a willingness and eagerness to improve. Because if the same 15 guys play every week, why do you have the next in line? I told everyone, if you challenge and you challenge every day, I will give you an opportunity. It is up to you to use it then.”

Every week, regardless of result, van Graan will be quoted as saying “we go back to zero on Monday”.

Was this something that he picked up on the highways of the US?

“I have been fortunate in my life to have been involved in teams like the Blue Bulls for nine years. Spending six years with the Springboks added to that then.

“That is why I believe you should listen more in this life than you speak.

“The ‘zero’ thing came from Frans Ludeker, who I respect very much.

“He made a massive difference in my life, especially off field, in the terms of how he behaved and how he lived his values and what he stood for.

“He taught me, it doesn’t matter how today goes, it matters what you do tomorrow. You have to start at zero, because what happened in the past does not matter now.

“The most important thing is what you do next. If every team played the perfect game every weekend, everyone would be winning and you would have no drama. That is what we love about sport.”

For this one, van Graan uses another analogy, which I think might have its roots in West Point.

“People will say, you have to wait for a door to open, but I told my players to kick the door open and I think a lot of guys have done it this season.”

Competition for places in the Munster team is arguably at an all time high. Jaco Taute, Rory Scannell, Dan Goggin, Chris Farrell and Sam Arnold are all fighting for two slots in the centre.

Munster are operating with five out-halves at present. The environment of performing under pressure has seen Munster raise their level of performance this season, but van Graan is aware that more hard work is needed if the promised land of silverware is to be visited.

“It is important you have a vision for the team, but you have to make sure the 47 players and the people in the academy can all see that vision.

“It is then up to the individual to try and improve and also for us to improve them as individuals too.

“Unfortunately, as a coach, you can only pick 15 players every week with 8 on the bench. Every week you will be disappointing someone.

With all these ‘learnings’ from years as an assistant coach, coupled with ‘life changing’ trips abroad, van Graan knows that now, with the buck stopping with him, as a head coach, everything is different.

“It is very different. All of the responsibility rests with you. There are a few things that I would have shied away from before as an assistant, just because of my personality. I don’t like to be the main crayon in the packet. I just like the game alot.

“Obviously selection is one thing that is very hard. Facing the media, contracting players, sitting in front of the board etc, they are all tough to get used to, but in year two, they are becoming easier.

“It is really not about me. I like being here and as long as I am here I am going to enjoy it and be part of a brilliant club and that is the beauty of sport, no two weeks are the same.”

Heading up an elite sports organisation cannot be an easy thing to do.

Managing a sport where 30 plus players play with an odd shaped ball can be even more challenging.

How then does van Graan keep a clear mind in what can seem like a pressure cooker environment of professional sport.

How does one keep 47 players and countless backroom staff all on message and all on point.

“In my head, it is a case of looking at what happened. Adapt accordingly, take from it what you can and move on. Leave the rest behind” - according to van Graan.

Easier said than done I am sure, but the vibe from the Munster camp is that the team are on the right road and judging by how many roads van Graan has already been down, the man driving the bus is well aware of the route.

“If you keep doing the same things you will always get the same results,” finished van Graan, and it is great to hear that he thinks so differently.