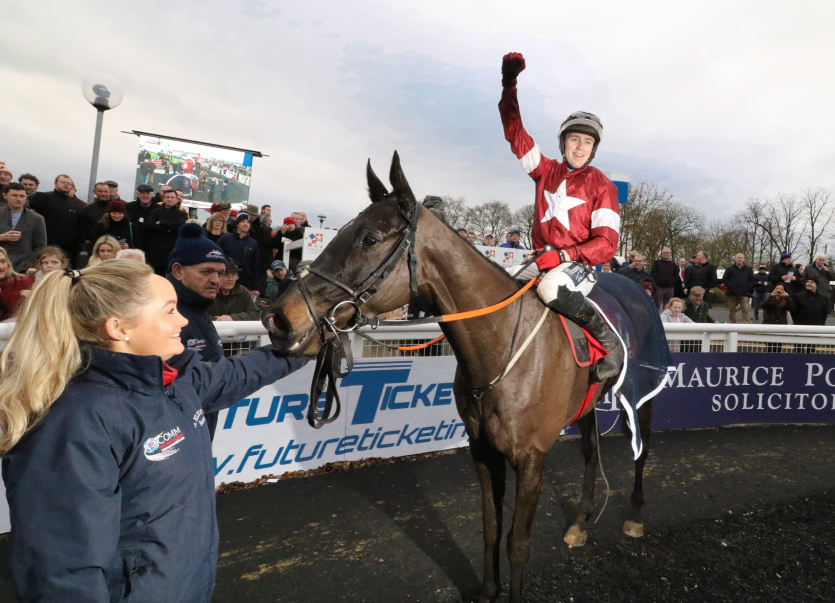 Speak to the bookmakers who stood at Leopardstown and one thing is nearly certain: they will be smiling.

These were four excellent days for the Foxrock layers. That a small number of individuals can dominate these meetings is something that punters are more than conscious of and the fact that it the bounty was spread so widely – while admirable in a sporting sense – was probably more than a bit unexpected.

JP McManus declared 12 horses in the Paddy Power at Leopardstown, before five of the seven runners in the Nevills Hotel Novice Chase wore the maroon of Gigginstown House Stud. And while McManus, indeed, snared the big handicap (Auvergnat under Donie McInerney) and Michael O'Leary the Grade One (Delta Work), that was not at all reflective of the week.

The powerhouses essentially had mixed Christmas periods. Gordon Elliott had just two winners from his first 50 runners over the course of the first couple of days across Ireland and Britain, whereas he also had to ruminate further over where they are going with Samcro, which did not look himself when beating one home in the Ryanair Hurdle.

Willie Mullins, meanwhile, enjoyed some big winners but Annamix was turned over at Limerick, Limini and Melon suffered comprehensive beatings and Faugheen suffered a horrible fall – one, to the relief of everyone in the grandstand – that did not leave him injured.

Indeed, the stats are quite incredible over the four days and certainly Horse Racing Ireland can reflect on a really uplifting spread of the success: from 63 races in Ireland over the Christmas period, 29 trainers won a race; 37 jockeys prevailed in victory; 37 winning owners had days to remember; and eight different syndicates prevailed.

For the Supreme Horse Racing Club, this was pretty unforgettable stuff. Aramon, which was still somewhat unheralded and set off 6-1, took the Grade 1 Paddy Power Future Champions Novice Hurdle in sensational fashion by ten lengths, very much suggesting that he is a player in the Supreme Novice Hurdle at the Cheltenham Festival. A day later, Kemboy's victory in the Savills Chase was pretty extraordinary in itself in the colours of the racing club, providing David Mullins with another big-race winner.

The Savills Chase was fascinating on many levels. The winning rider made a mid-race move that other jockeys – certainly when riding for someone as legendary as Willie Mullins – would not even have contemplating, sensing that the slow pace was favouring those up front and thereafter pretty much dictating matters himself.

It is tempting to think that Kemboy, beaten a long way behind Shattered Love at the Cheltenham Festival, is flattered by the bare result to an extent, but since falling in the Irish National he is four from four, and has essentially won easily every time. It seems astonishing that the champion trainer has never won the Gold Cup but his record in this race has been relatively unimpressive too and Kemboy essentially looks unexposed as a stayer on good ground.

The horse, arguably, to take out of the race is also housed in a barn awaiting its first winner in the Gold Cup. Road To Respect, sent off favourite after a commanding return at Down Royal, suffered a nightmare of a run in the last mile of the race, losing a huge amount of ground and facing a next-to-hopeless task under Sean Flanagan, only to rally bravely and nearly snatch second.

With Might Bite and Native River both well-beaten in the King George, this does not look an unwinnable Gold Cup for the Irish, and perhaps the main disappointment about Leopardstown at Christmas was that Presenting Percy did not contest the Savills Chase, as trainer Pat Kelly feared that the ground was too hard.

On that note, the sight of bees in Dublin City on December 30 is a shocking anomaly, and one which again reminds us that climate trends seems to be gone long beyond our control. This will become a major challenge for trainers, ground staff and racing generally in this country.

Apples Jade will not be too bothered by all of this, as she seems to handle all ground much the same and was far from asked a serious question when Faugheen tumbled in the Squared Financial Festival Hurdle. It would appear that she will stick to mares' company at Cheltenham but do not entirely rule out a shot at the Stayers' Hurdle.

It is possible, too, that Samcro could end up going there, as he was not nearly able to match the pace shown by Sharjah in the Ryanair Hurdle, a race also notable for how well Supasundae ran over an inadequate trip.

That was a Grade 1 for Patrick Mullins and another for Keith Donoghue as Hardline somehow mastered Getabird in an incredible renewal of Limerick's first top-rung race, the Matchbook Betting Exchange Novice Steeplechase. For both men – and Finny Maguire, who somehow won three bumpers at Leopardstown – it was fairytale stuff.

For those who put their money on the favourites, it was a little more taxing!