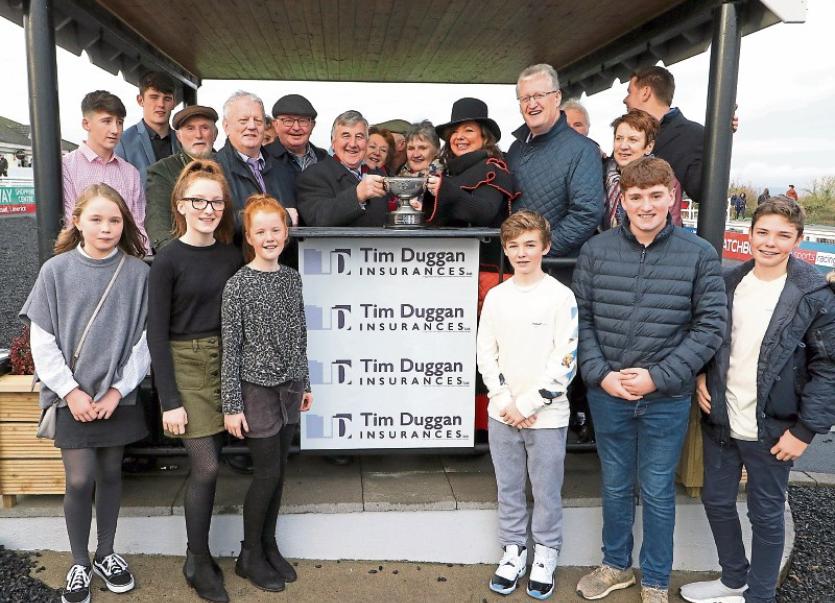 Presentation being made to the Thade Quill Syndicate members after Westerner Point won the €50,000 Tim Duggan Memorial Handicap Chase for a second time at Limerick Racecourse this Thursday

MORE than 25,000 racegoers have flocked to the Mr Binman Limerick Christmas Racing Festival over the opening two days of the four-day National Hunt fixture.

Dry weather, with mild temperatures have seen attendance figures at the half-way point of the four-day Festival at Greenmount Park move ahead of 2017 levels.

Some 11,239 patrons thronged the enclosures on today’s second day of the Limerick Christmas Racing Festival. The attendance was an increase on the 11,054 who turned out for the December 27 card 12 months ago.

St Stephen’s Day is traditionally the best attended of the four days, with 13,982 racegoers turning out yesterday, again an increase on 2017 levels when  13,808 passed through the turnstiles.

Bookmakers turnover today, December 27, at the track was recorded at €202,390, a substantial increase on a turnover of €167,086 recorded on the same day 12 months ago. However, betting turnover with the Tote dropped significantly to €141,781.

On the racecourse, the day’s feature race, the €50,000 Grade B Tim Duggan Memorial Handicap Steeplechase was won for a second time by Westerner Point.

The 14/1 winner is trained by Eoghan O’Grady, in Mallow, and was ridden by regular partner Phillip Enright. Nine-year-old Westerner Point, who also won the race in 2016, was recording his tenth career win.

Still Alive he got the better of Miss Echrad inside the final 100 yards and took the spoils by three parts of a length for his Limerick connections at odds of 11/1.

Limerick’s Christmas Racing Festival, expected to attract more than 40,000 racegoers to the Patrickswell venue over the four days, is one of the biggest highlights of the local sporting and social calendar and provides a multi-million euro bonanza for the local economy.

Racing continues at Limerick Racecourse on Friday, December when the feature race is the Irish Independent Hurdle, a Grade 3 race with a €34,000 pot. The first race is due off at 12pm.

A big feature on the day at Greenmount Park is the Sunway Holidays Most Stylish lady competition, a firm favourite on the social calendar, with some very good prizes up for grabs.

General admission for both December 28 and 29 is €15, with €10 concessions for seniors and students.