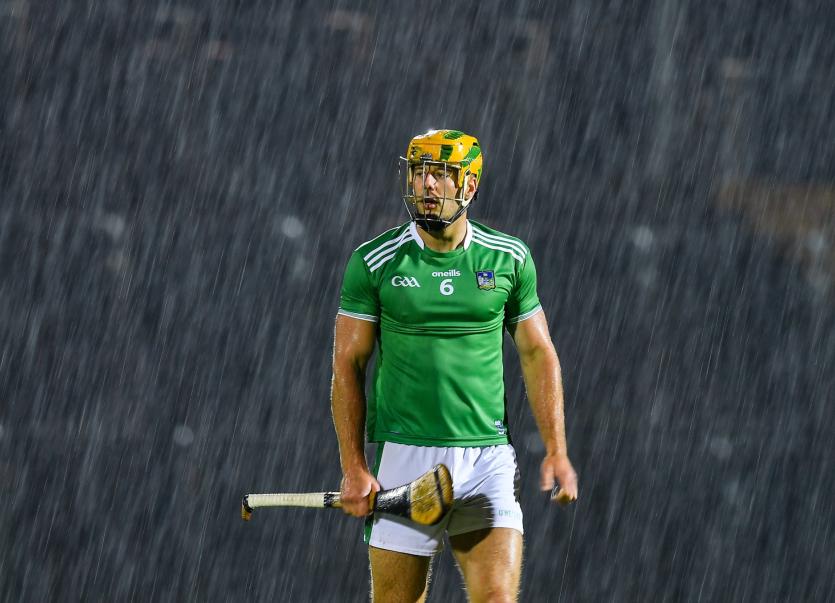 Dan Morrissey pictured during a downpour in Tralee

This Thursday the All-Ireland champions jet off on their team holiday with their next competitive fixture most likely a January 27 Allianz League tie in Wexford.

“I think the two games got us back to basics because we now understand again that you just have to work so hard to take anything out of any game you play and it doesn’t matter if you are All-Ireland champions or not - you have to work hard," said John Kiely of the Co-Op Superstores Munster Hurling League games.

He added: “Psychologically the two games have been very good for us - to get them in before Christmas and get that grounding that we needed to snap out of things and realise we do have to work really hard”.

“I know our fitness needs more work and our hurling needs more work and the boys now accept we need to get back down to work - we have a session Saturday and St Stephens Day and we will do a few while we are away as well,” said the All-Ireland winning manager.

Thursday’s 15-point win over Kerry in Tralee was Limerick’s 19th competitive fixture in the calendar year.

“We got off to a great start with the couple of goals but to be fair to them, Kerry rallied and worked really hard for the rest of the first half,” said Kiely, referencing two Limerick goals inside the first three minutes.

“Our tackling wasn’t as good as it might have been - we gave away 13 frees in the first half and that wasn’t good enough. It was, what it was - we didn’t get off to a rip-roaring start really in terms of our general play, which wasn’t great in the first half. In fairness to the boys they responded in the second half and knuckled down and set the tone from early doors and worked hard to create plenty chances,” he explained.

“Oh that weather - I thought it was going to hold out for another two hours according to the forecast. It was a pity - we got a deluge of rain and it made conditions very difficult. It was wicked - it was cold as well as wet. Very very cold and it was hard even though the pitch was in good condition - it was grassy but solid underfoot. It was rough conditions for hurling, no doubt about it,” sighed Kiely.

“Hats off to the Kerry boys - they worked really hard and their use of the ball coming out of defence was very good. They look like a side that are going to make a bit of a statement themselves this year - they look very organised and well prepared and they use the ball well,” said the Galbally man.