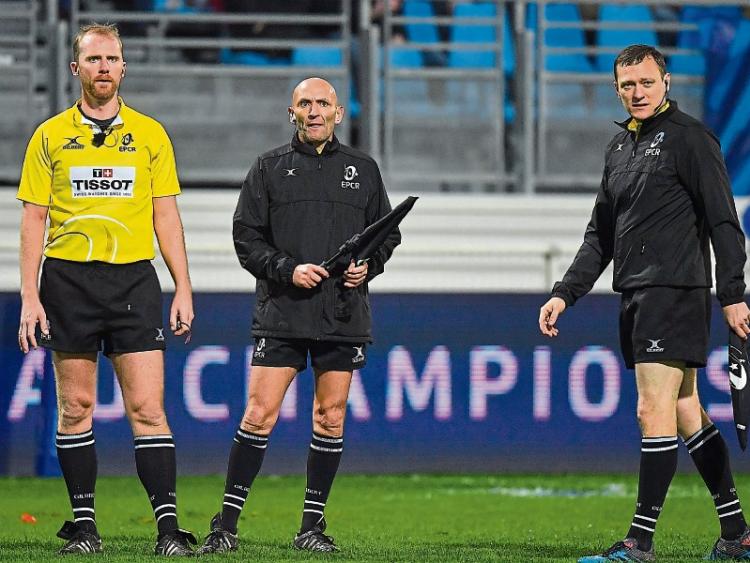 Referee Wayne Barnes and his officials watch as the TMO reviews a try by Andrew Conway of Munster, which was not awarded, during the Champions Cup match between Castres and Munster at Stade Pierre Fa

The game of Rugby Union has always held itself in high regard when it comes to the officiating of the game.

One will often be told, “they are not rules, they are laws”

Rugby is growing, as a spectator sport, by the second. Every week there are more and more fans being drawn to the game.

The issue for rugby now is how long can they keep people coming to the show?

The game of rugby is slowly realising that with increasing supporter base, comes increased scrutiny, both on and off the paddock.

Fans want to know more about the game, the players, the relationship with legal and illegal drugs and the laws of the game.

As the interest increases, the players are becoming more guarded, the ex professionals are learning that their thoughts on the 'medicalisation' of the game are now front page news. (Just ask Brian O'Driscoll)

However, one of the biggest challenges facing the game is the variance in which the laws are interpreted from week to week.

A lack of understanding of what is going on at any one time, is one of the main reasons Baseball and American Football have been slow to catch the attention of a Worldwide audience.

Should rugby wish to grow the game globally, they first need to learn how to referee the game with more consistency.

Limerick has, over the years, boasted some of the best referees in the World. Joy Neville, George Clancy and Peter Fitzgibbon have all refereed at the top level, so 'we' do know our rugby .

The problem now though is that rugby is becoming harder to understand for the fans, the players and the coaches worldwide.

Wayne Barnes, the man in the middle for last weekend's Castres v Munster battle, came in for a lot of criticism this week and rightly so.

There was so much off the ball stuff missed last Saturday in Castres, that is it hard to figure out what the TMO and the touch judges were actually there for.

Missing flagrant fouls both on and off the ball are inexcusable. They are the high end of refereeing failure.

The inconsistencies surrounding ruck clear outs, players not supporting their body weight or side entry into rucks and mauls are where the real issue lies for rugby, week in, week out.

Every single ruck, of which there can be over 300 of in a game are becoming a lottery.

If people see the game was lawless, they will move elsewhere, quickly.