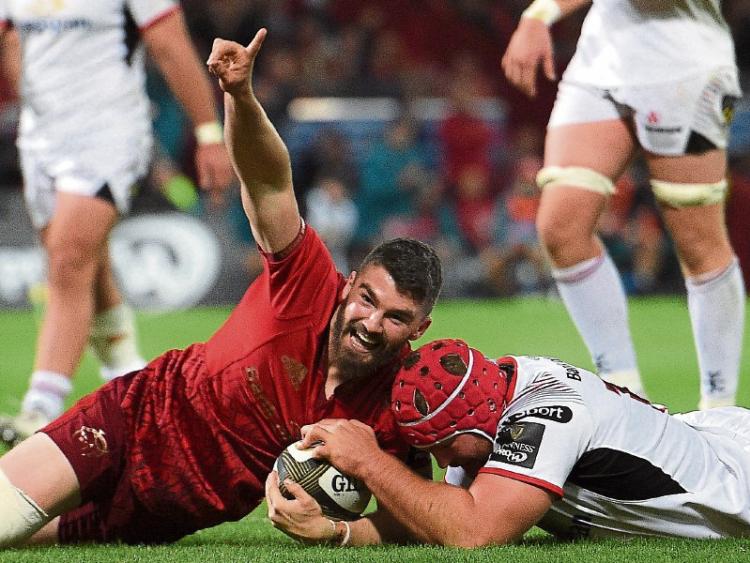 Hands up for selection: Sam Arnold of Munster celebrates after scoring his side's seventh try when Munster defeated Ulster in September. The two sides meet against this Friday night in Ravenhill, with

MUNSTER go in search of some early Christmas cheer when locking horns with Ulster in the first of three interprovincial fixtures over the Festive period this Friday.

Johann van Graan’s charges have lost just one of their last 10 meetings with Ulster in the Guinness PRO14 ahead of their Kingspan Stadium clash which has a 7.35pm kick-off, live on eir Sport.

Munster’s only recent defeat to their interprovincial rivals was their dramatic 24-17 reverse in Belfast on New Year’s Day this year.

Following on from Friday’s clash, Munster face further interprovincial fixtures in the PRO14 against Leinster at Thomond Park on Saturday, December 29, 5.15pm, and against Connacht at the Sportsground in Galway on Saturday, January 5, 7.35pm.

Glasgow currently lead the way in Conference A of the PRO14, seven points clear of second-placed Munster.

Johann van Graan’s squad will be looking to bounce back from their disappointing Champions Cup defeat to Castres Olympique in France last weekend which turned out to be a narky contest.

Two Castres players were cited as a result of incidents in the which ended in a one-point win for the French champions.

Last weekend’s loss to Castres leaves Munster with just two away wins all season, and that has also been an issue in interprovincial derbies, with a victory over Connacht in Galway in 2016 the last time they got the better of an Irish team away from home.

Munster were left wondering where it all went wrong on their last visit to Belfast on New Year’s Day this year, as they surrendered a 17 point half time lead to leave Ravenhill with a 24-17 loss.

Munster were reduced to 14 men when Sam Arnold was sent off for a high tackle on Christian Lealiifano after an hour.

Fielding a side which will contain a mix of youth and experience, Munster will expect a demanding test from Ulster this Friday night.

Ulster completed an impressive home-and-away double over the Scarlets in the  Heineken Champions Cup over the last two weekends.

Head coach Van Graan said: “Ulster is a team that's playing really good rugby at this stage. We knew from the start in this 10-week block that we're just going to play quality opposition so it's Ulster first up now.