Bragging rights for UL-Bohs and Bruff in Limerick AIL derbies 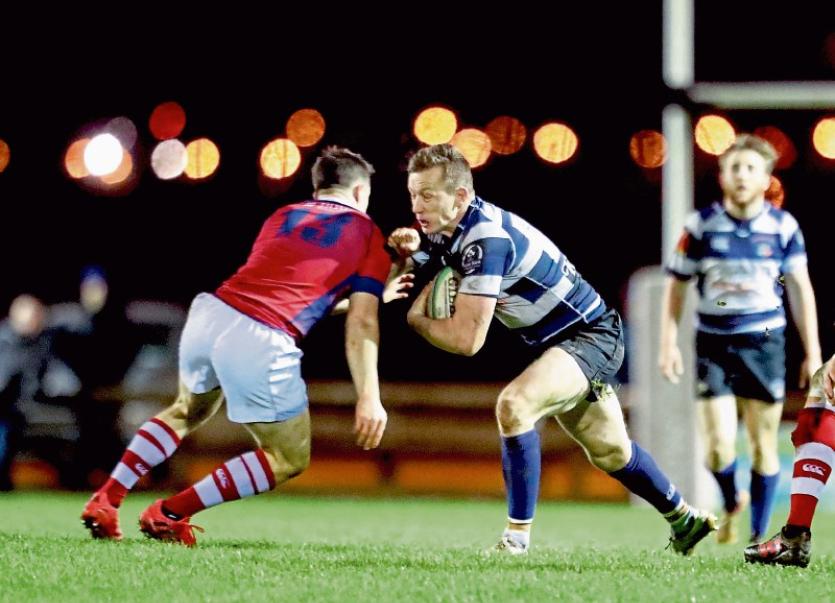 UL-Bohs centre Harry Fleming makes a tackle on Shane Mullally, of Old Crescent, in their All-Ireland League Division 2A game at Rosbrien on Friday night

In Division 2A, UL-Bohemian made it three wins from four games in the AIL, when scoring a hard fought 13-10 victory over Old Crescent at Rosbrien.

The win ensures UL-Bohs will remain in fourth place in the Division 2A table heading into the Christmas break. Old Crescent sit sixth in the table ahead of Saturday afternoon’s fixtures.

Friday night’s derby game was also the first leg in the inaugural Hayes-Walsh Cup between the two Limerick clubs.

Christy Neilan’s Red Red Robins built a 10-0 lead in the opening half with a penalty from Mike Mullally followed by a Brian Walsh try. Mullally also added the conversion.

A penalty goal from Ronan McKenna shortly before half-time reduced the visitors lead to 10-3 at the break.

Mulally kicked a third quarter penalty to stretch UL-Bohs lead to 13-3. However, Old Crescent secured a losing bonus point when Cathal O’Reilly struck for a crucial try, which McKenna converted.

UL-Bohs will host Old Crescent in the next round of the league when the competition resumes on Friday, January 18 at UL North Campus, 8pm.

Thomond did manage a penalty try awarded following a scrum close to the Bruff line.

The home side added a fourth try in the second half to pick up a precious bonus point which helps maintains their promotion push.

Thomond, with just one win from their nine AIL games this season, are facing a relegation battle in the New Year.