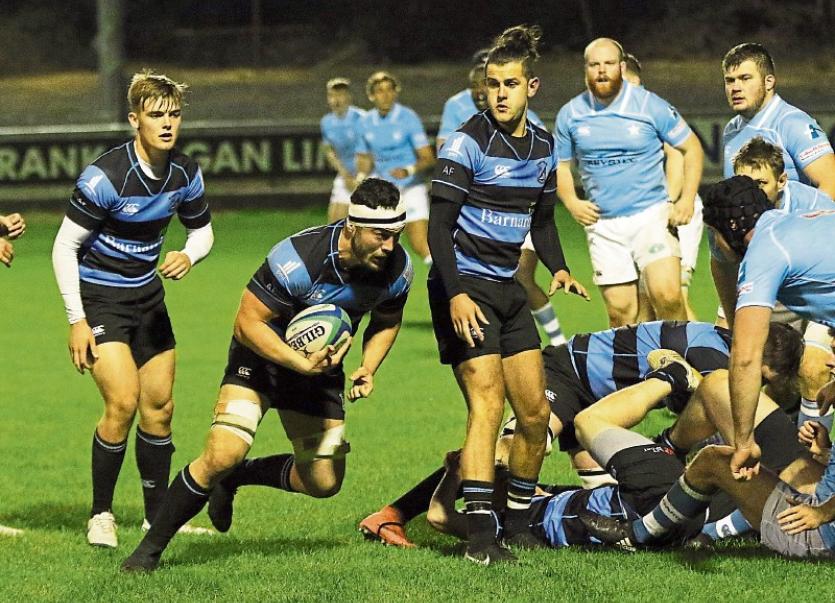 THE penultimate round of All-Ireland League fixtures prior to the Christmas break takes place this Friday and Saturday.

The action kicks-off with the mouth-watering Limerick Division 1A derby featuring old rivals Garryowen and Shannon at Dooradoyle on Friday night, 8pm.

Then, on Saturday, also in the top flight, Young Munster make the trip to Leeside to face high-flying Cork Constitution at Temple Hill, 2.30pm.

There is also a full round of fixtures in Division 2C, with Thomond entertaining Tullamore at Liam Fitzgerald Park and in-form Bruff travelling to Estuary Park to face Malahide.

Friday night’s derby clash of Garryowen and Shannon is a crucial fixture for both sides.

Fifth-placed Garryowen come into the game on the back of a nail-biting victory over basement side in Terenure College on Saturday. Teenage out-half Ben Healy kicked four penalties for the ‘Light Blues’ as head coach Conan Doyle made it back-to-back wins in Division 1A.

Healy, who captained Glenstal Abbey to their historic Munster Schools Senior Cup final win last March, is a member of the Munster Academy.

Garryowen sit just one point off Dublin University, who occupy the last of the top four play-off positions after seven series of fixtures.

The top three sides in Division 1A, Cork Con, Clontarf and Lansdowne, have moved clear of the following sides as the table-topping Leesiders enjoy a 12-point lead over Garryowen, while third-placed Lansdowne enjoy an eight-point lead over the Dooradoyle side.

Shannon sit in sixth place in the table, just one point and one place behind Friday night’s opponents Garryowen.

Tom Hayes’ charges suffered a disappointing 32-15 defeat to an impressive Lansdowne outfit in their most recent outing on Saturday.

The Parish side were outscored four tries to two at Thomond Park with the home side’s five-pointers coming courtesy of centre Robbie Deegan and winger Nathan Randles.

Shannon head coach Tom Hayes said: “I certainly hope the boys will be energised by the prospect of the game on Friday night. That is all part and parcel of playing in the top division, the bigger occasions, the more exciting occasions.

“We want to go and give the best account of ourselves possible and see where it takes us.”

In 2A, fifth-placed UL-Bohs will hope to get back to winning ways when hosting Dolphin on Saturday. UL-Bohs will look to bounce back from their defeat away to Cashel on Friday.

Also in 2A, Old Crescent made it two wins on the bounce with their bonus point success over Nenagh Ormond.

In 2C, basement side Thomond will be desperate to pick up a win when hosting fellow strugglers Tullamore. Thomond have won just one of their seven AIL games this term.

Also in 2C, Bruff, seeking their seventh win on the bounce, travel to Malahide.

In form Bruff sit in a lofty second place in the table, just two points behind leaders Ballina and one point ahead of Midleton.

For more All-Ireland league action see www.limerickleader.ie every Saturday afternoon for your results round up as well as using #LLSport on social media platforms.