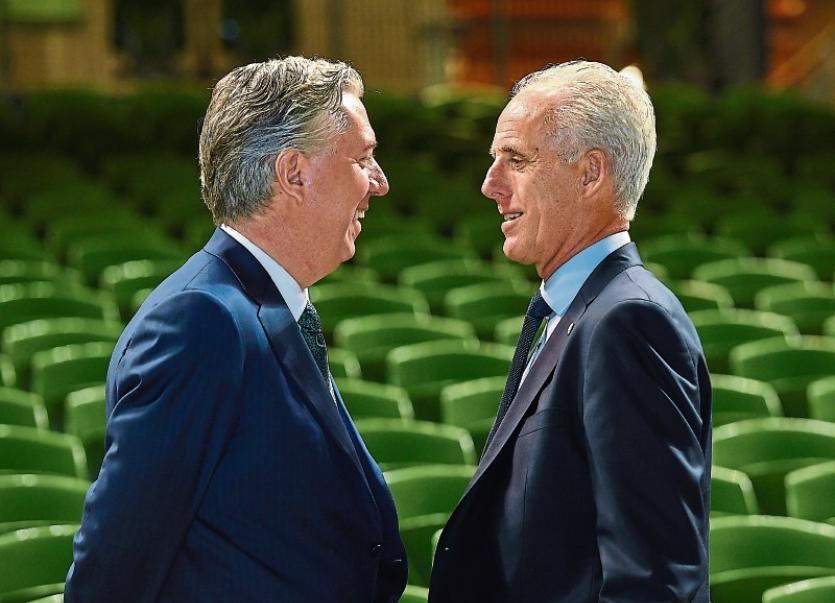 Last week I wrote about how the Aviva Stadium was like chalk and cheese for its two residents, the IRFU and the FAI.

This week, it was highlighted in the media just how differently both are treated, for what is essentially the same process.

Over the weekend the FAI announced that Mick McCarthy was to be the new Ireland manager. The former Ireland, Ipswich and Wolves top man, makes a return to the Ireland fold after a gap of 16 seasons.

McCarthy will be replaced in two years time however by Stephen Kenny. The former Dundalk manager will take over the U-21s in the interim and will then be promoted, regardless of the performance of McCarthy, to the top job in 2020.

The FAI needed to replace Roy Keane and Martin O'Neill. They needed to show that they had a plan and they needed to get someone in who would appease the soccer masses who wanted someone from the League of Ireland to be recognised for all their hard efforts in the grass roots of the game.

It certainly looks that way when you consider that about 24 hours later the IRFU did the same thing and they have been lauded for it.

The IRFU announced on Monday that Joe Schmidt will leave at the end of the World Cup and will be replaced by his assistant Andy Farrell.

It is true the IRFU get an ‘easy’ ride sometimes when it comes to the press. That is always going to be the case when the team is performing and they have been at the top table of the game for several years now.

It could be argued that Irish rugby was the quickest to adapt to the professional game.

Therefore there is no need for negativity, it seems, as the audience is not there for same.

The FAI on the other hand, not that they are doing everything right, seem to attract criticism like moths to a flame.

The announcement of Mick McCarthy and Stephen Kenny is a giant step forward for Irish soccer, but will it be given time to develop?

Ireland's national team are at such a low ebb, that even a shot on target would be deemed a success at this point.

If the backlash to the appointment of the dynamic duo is anything to go by, the media and fans are only waiting for the first sign of weakness to pounce.

It is not often a coach who works at the grass roots gets his chance at the top of his/her game.

Kenny is a shining ray of hope to all those coaches out there who believe they are good enough to coach at the next level.

The IRFU and the FAI are slow to appoint their own into the high profile positions. Therefore it must be celebrated when they do so.

Yes, it may not work out in the end for McCarthy and Kenny, but can we not all give it a chance at least?

It is a new road for the FAI to try something like this, why not see how far they get on their journey before looking to see where they ‘could’ come a cropper?