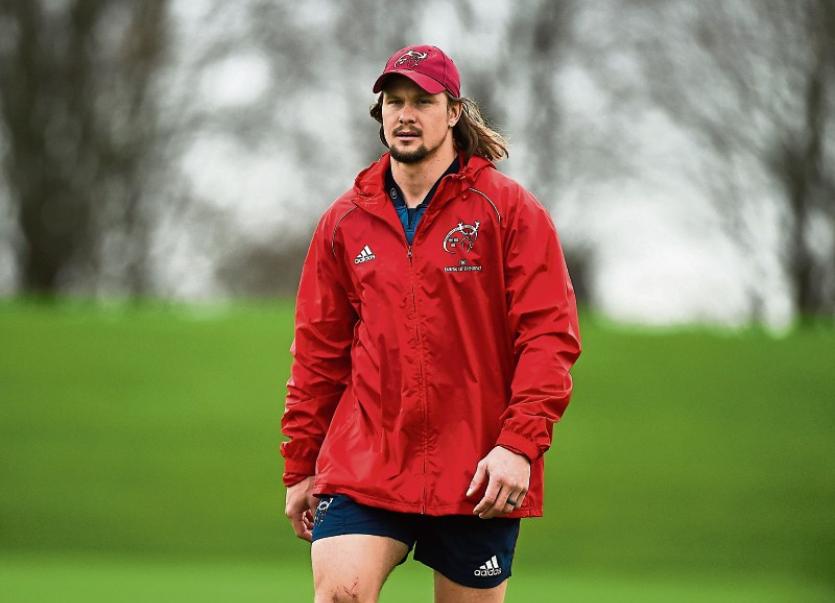 HIS off-field demeanour is very different to how he approaches a game of rugby. South African back-rower Arno Botha is up for press interview this week for the first time since his summer arrival at Munster.

On the pitch, 27-year-old Botha is a marauding, explosive ball carrier, with distinctive flowing locks. In contrast in an interview setting he is quietly spoken, mild-mannered and engaging. On Friday night, Botha will be part of the Munster squad which faces Edinburgh in the Guinness PRO14 at Musgrave Park, 7.35pm, eirSport.

So how did the former Blue Bulls and London Irish, who featured for the Springboks on two occasions in 2013, end up among the growing number of South Africans at Munster?

Botha said: “They have been an awesome few months for me.  I’m really enjoying it, settling in quite nicely, and happy to have come here.  I didn’t know a lot about Munster before coming here except that it was a world-class club, very rich in the history of rugby.

“At the time, I was at the Bulls and wasn’t watching rugby a lot, seven years there and enjoying life there before heading off to London Irish for four months from January to May this year before I got the first opportunity to come here and didn’t know a lot but everything I have seen has been good.

“I came in the summer so the climate didn’t come into play at all.  For me, it’s more about a mind set, a mentality, and what you make of it.

“If I’m not going to make it nice for myself, I’m not going to enjoy every day of it so it’s a mind set of enjoying it. But  it’s not difficult for me to do it because it’s been easy to settle in.

“I knew Johann was here. I knew him personally also. He was at the Bulls when I started there, so we worked together for three years and with South Africa in 2012 and 2013. That influenced my decision to come here because I knew the type of person and coach he is, not that I take away anything from other coaches but he’s a very good coach. Look at his record, he’s been constant all his life, ten plus years with the Bulls and six with South Africa so he’s not jumping around. He wants to  make a  difference in  people’s lives so I knew it would always be good for me to be involved with him.”

Another familiar face from his days at the Bulls when Botha arrived at Munster was fellow back-rower CJ Stander.

“We speak and joke a lot about that. We played in the same position.  While I wouldn’t say he’s been unlucky (in South Africa) because obviously it’s not that unlucky to play for Ireland now, it worked out well for him, but it’s also because of the hard work that he has been doing.

So, yeah at that stage we were in competition and obviously he made the right decision to come here.”