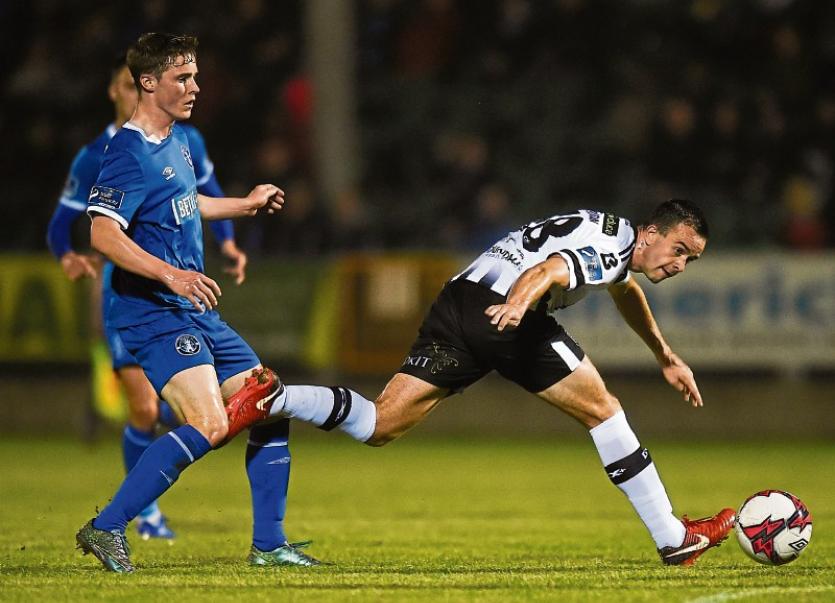 Limerick FCs Will Fitzgerald, left, in action against Robbie Benson, of Dundlak, in one of their SSE Airtricity League Premier Division fixtures last season

NEW Republic of Ireland U-21 manager Stephen Kenny has namechecked Limerick FCs talented winger Will Fitzgerald as a player who has the potential to make his international squad for future fixtures.

The Blues season ended in relegation to the First Division following their play-off defeat to Finn Harps.

Stephen Kenny got a close up view of Fitzgerald’s excellent run of form in Dundalk’s four league and an FAI Cup meeting with Limerick in 2018.

Speaking at his unveiling as new Rep of Ireland U-21 manager, Kenny said: “There are even players in the League of Ireland available for the U21 team right throughout the country. At UCD, players like Neil Farrugia and Liam Scales, Will Fitzgerald down in Limerick, Trevor Clarke at Shamrock Rovers, Darragh Leahy at Bohemians, two really good left backs, Ali Reghba at Bohemians, players like that.

“I’m leaving a lot out, I’d say, but the underlying thing is that there are a lot of young, talented players playing throughout the country.”