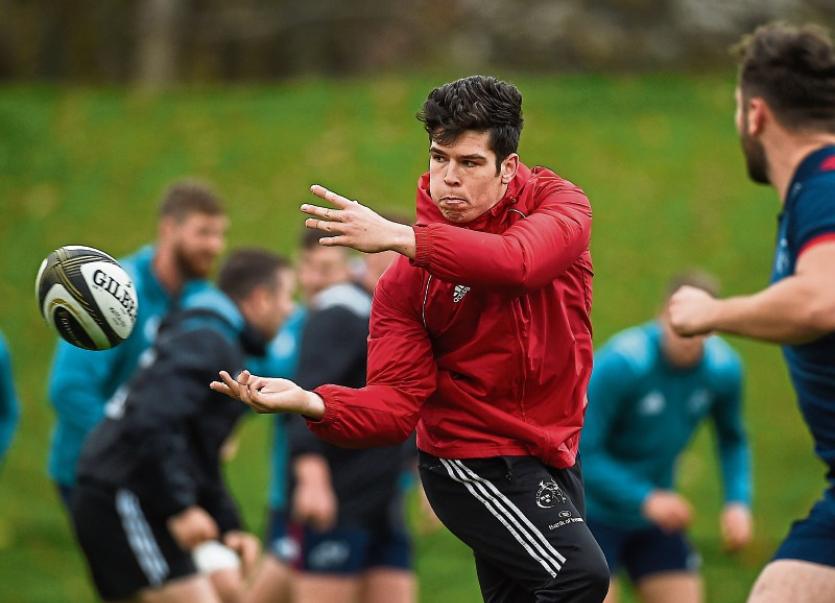 Alex Wootton in training this week

MUNSTER winger Alex Wootton is learning to be patient this season, to bide his time for opportunities to impress in the marquee fixtures.

But that is the nature of professional rugby at a club like Munster where the squad depth runs deep.

On the back of an injury interrupted pre-season, twenty four-year-old Wootton has started just two games for Munster this term, while he was also a used replacement in the nail-biting victory over Glasgow at Thomond Park at the end of October.

Wootton has lost none of his try-scoring touch, dotting down twice to date this term.

At the same stage last season, Wootton had made six starts for the province and was sprung from the bench on another occasion.

Stockport-born Wootton went on to rack up 19 starts for Munster in all, including one in the mammoth Champions Cup semi-final clash with Racing 92 in Bordeaux last April.

He amassed a fine personal haul of nine tries, or practically one in every second game.

Professional rugby has taught Wootton the importance of being ready to take your chance when it comes.

Wootton said at Munster’s weekly press briefing at UL this week: “Pre-season was long, I didn’t manage to get a full pre-season under the belt. I had a few more niggles throughout the beginning of the season, so I would have liked to have carried on after the Cheetahs game (Munster’s last PRO14 fixture before recent break) after it went well, but sometimes you just have to take a step back and re-assess.

“Last season, things were a bit different, started well, this season is a little bit different, I haven’t played very much, two and a half games and for one and a half of those games, I wasn’t supposed to be involved.

“I got called in when Andrew Conway was ill the night before the Glasgow game and Mike Haley with his hamstring.

“Look, I was only supposed to play one game this season as compared to last season.

“I’ve managed to accept those sorts of things. It’s all about professional rugby.  And, of course, it shows how deep the squad is.

“The competition is right up there and where else would you want to be? It’s going to make you a better player and a better person at the same time.  It’s fantastic.

“I was involved in the European Cup semi-final in Bordeaux against Racing.

“Even though I learned a lot from that, it’s been tough to get going this season.  I feel I’m back on the path now and hopefully can kick on.

“Training is great and that’s all you can do, manage the day to day sort of things and if I’m involved this weekend, put my best foot forward and give the coaches a bit of a headache.

“The best rugby I play is when I do my work early on the in the week, do my homework, and then later in the week relax and get into the game, put my best foot forward.”

While Munster remain unbeaten at home this season in the PRO14, the province has won just once on the road this term.

Wootton said: “Yes, it’s one of those things that isn’t necessarily brought up but as a professional you are aware of. All we can do is right some wrongs there.”