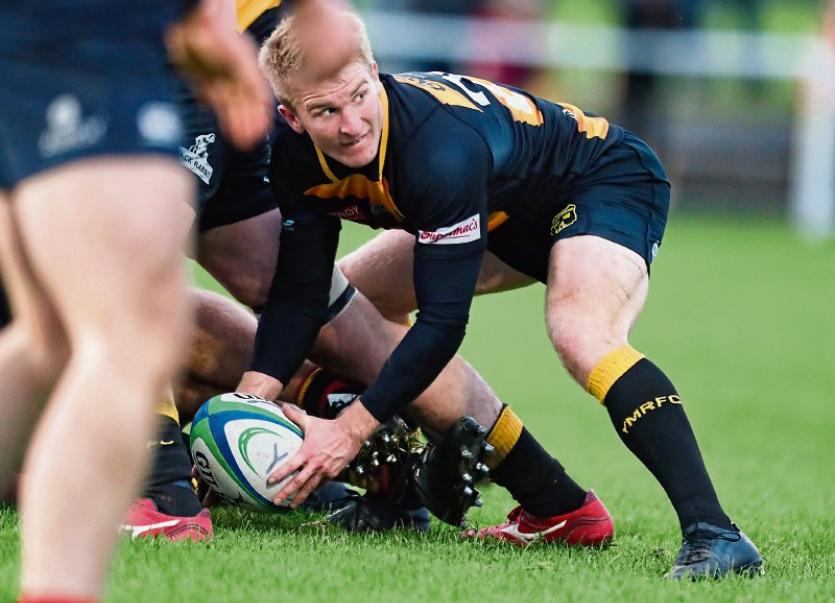 Shane Kerins of Young Munster who will face Garryowen on Sunday

ACTION in Division 1A of the All-Ireland League resumes this Friday night with the crucial derby clash of local rivals Garryowen and Young Munster at Dooradoyle, 8pm.

Also in Division 1A, in-form Shannon travel to College Park to take on Dublin University on Saturday, 2.30pm.

Both Garryowen and Young Munster will be desperate to record victory in Friday night’s derby.

Neither side will be happy with their league position after five series of AIL games. Both have won just two of their five opening league games.

Munsters’ currently sit in seventh place in the table, just ahead of eighth placed Garryowen by virtue of their superior points difference.

Gearóid Prendergast’s Young Munster side have lost each of their last two AIL fixtures, while Garryowen will be aiming to ended a three-game losing run in the top flight.

Whichever side loses Friday night’s fixture will need a significant turnaround in fortunes over the remaining two thirds of the regular season if they are to make the top four play-offs.

Meanwhile, third-placed Shannon have made an impressive transition to life in 1A after winning the Division 1B title at the end of last season.

Shannon scored an impressive 31-20 win over UCC last time out.

Saturday’s fixtures kick starts a demanding four-week run of Division 1A games for the three local clubs competing in the top flight.

Garryowen suffered a heavy 27-3 defeat at the hands of Cork Con in Temple Hill, while Young Munster succumbed 12-23 at home to Lansdowne at Clifford Park in the Limerick sides most recent league outings.

Garryowen, semi-finalists in Division 1A of the All-Ireland League last season, were suffering their third defeat in five games. The Light Blues, who trailed 3-13 at half-time, had a single penalty goal to show for their efforts from the boot of centre Peader Collins.

Garryowen's errors and indiscipline, which contributed to their 31-19 home defeat to UCD the previous time out, were evident again.

Meanwhile, Young Munster, who trailed 0-10 at half-time, had a converted try from Conor Hayes, while flying winger Darragh O’Neill also touched down.

The home side were pressing hard for a lead score deep inside the Lansdowne ‘22 at 12-16 when Lansdowne struck for a length-of-the-field intercept try to swing the game decisively in the visitors’ favour.

Promoted Shannon got back to winning ways when easing past UCC 31-20 on the back pitch at Thomond Park.

Shannon laid the foundation for their 11-point win over the students in the opening half after which the Parish side led 21-8.

Fitzgerald scored 192 points in Shannon's title-winning run in the second tier and the Connacht player made his Division 1A debut the UCC game in the familiar surroundings of Thomond Park's back pitch.

The 21-year-old out-half lined out alongside his former Munster Academy colleague Jack Stafford, with Ennis starlet Ikem Ugwueru another notable inclusion on the right wing.

Conan Doyle’s Garryowen are scheduled to begin their 2019 programme of fixtures with a mouth-watering Bank of Ireland Munster Senior Cup final fixture with Cork Constitution on January 5.