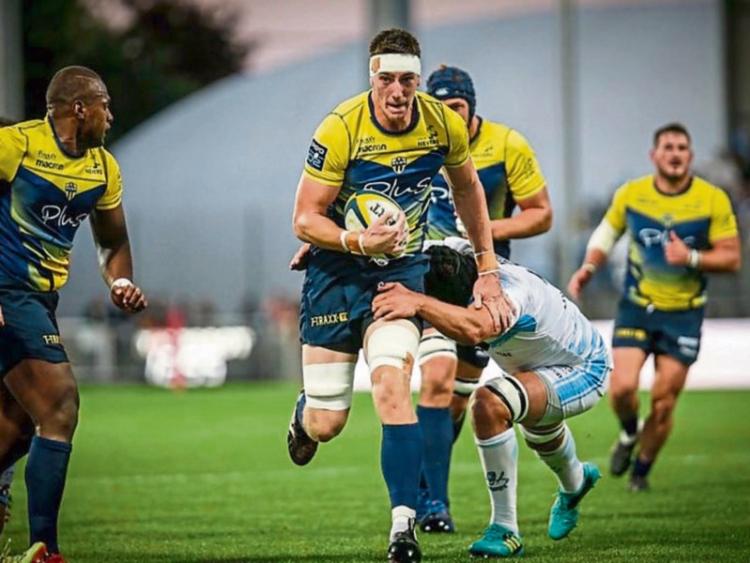 Frank Bradhsaw Ryan in action for Nevers in France

ASK Frank Bradshaw-Ryan about the fan Twitter account @BigFrunkFans which has sprung up in recent seasons to keep the public informed of his progress as a professional rugby player with USON Nevers in France and the Limerick man chuckles.

“It's Old Crescent fly-half Ronan McKenna who is the founder and leader of the twitter account! It is hilarious, to be fair.

“Funnily enough, it is probably the best way for people to find how I am doing over here!,” Clareview man Bradshaw-Ryan admits.

Bradshaw-Ryan went into the Munster sub-academy in November 2013. In October 2015, the former Irish U-19 international was told the province didn’t have a contract for him.

Rather than feel sorry for himself, a determined Bradshaw-Ryan found an agent in France. The former Shannon lock forward quickly put a video together featuring him in action and in April 2016, French Federale 1 side Auch, a former Top 14 club, came calling.

Bradshaw-Ryan’s ​time at Auch, who played in France’s third-tier, turned out to be a positive experience and Bradshaw Ryan is now plying his trade with promotion-chasing Pro D2 outfit USON Nevers.

Now in his second season with Nevers, located 260kms southeast of Paris, Bradshaw-Ryan has really kicked on this season.

“Things are going well. I can't complain. Just under 12 months ago I played my first game for the senior side and I have been there or thereabouts since.

“I have taken on a leadership role in the line-out. That has helped me stake a claim. I have also gotten more used to the physicality of the game at this level. It has the stereotype of being a rough and tumble league, but it really is. I got used to it in training. I was able to get parity there in matches and it helped as well.

“I have gotten to know the lads. It's a new team and I think there was a massive turnover the year I came, something like 21 new players came, so it's a case of getting to know the lads you play with, getting used to how they play, how they do things as well.

“We have French classes every week. I am definitely getting on top of it. I wouldn't be fluent yet, but I am well able to hold a conversation. The best way to do it is to try and sit beside the French lads at team meetings, not sit with the overseas guys. It's getting better. I have done a few interviews in French too which has surprised a few people back home!”

Nevers’ promotion push this season has also been helped by the addition of a couple of high profile signings, including 11-time called All-Black winger Zac Guilford, the former Clermont Auvergne, Crusaders, Hurricanes and Waratahs star, as well as former Hurricanes, Chiefs and Maori All-Black hooker Hika Elliot. Frank Bradshaw-Ryan’s fans’ twitter account maintained that the signing of Elliot had been made possible ‘due to Frank jersey sales going so well!’

Frank Bradshaw Ryan is living in an apartment in Nevers city centre, in a block where 10 or 11 of the club’s overseas players are based.

His closest friends in the squad include English-born out-half Zack Henry and their Canadian international centre Conor Trainor.

After 11 series of fixtures in the fiercely competitive PRO D2, Nevers are sixth in the table, occupying one of the promotion play-off positions. However, Nevers are just two points off table toppers Mont-de-Marsan.

Nevers travel to struggling Colomiers this Friday night. Just as in the case of the Top 14, away wins are very rare in the PRO D2.

Frank Bradshaw Ryan said: “We won at the weekend, but the team below us, Carcassonne, also won with a bonus point, so we dropped down a spot from fifth to sixth in the table.

“Away games are virtually impossible to win over here whatever it is, whether it’s mentality or referees or whatever, I am not sure.

“We have only won one away game all year. That is the difference between us in sixth and a team in 10th. If you lose a home game you are screwed, you will find yourself in trouble.

“It is hard to put a finger on it. We are lucky to be fair. Our President is very involved and wants us to do well in away games, so if it is a long bus journey we catch a flight instead of getting a bus. That helps.

“The overseas players cannot really get over it. It is an attitude change. It is getting better, but it is mad how it goes.

“Last weekend every team playing away from home took a losing bonus point in the PRO D2, apart from one, Oyonnax, who picked up a win on the road. That shows the away teams were up for the games. It is so tight.

“Every point is so crucial.

“Last year we were just focusing on staying up. Now we are focused on at least making the promotion play-offs. In PRO D2 this year the side finishing top is not promoted automatically to the Top 14, they are in the play-offs as well. We don't mind whether it is first or sixth, as long as we are in the play-offs. We will fancy ourselves against anyone in a Cup final scenario. That is what we are aiming for now.”

The fact the Limerick second row is in the first of a three year contract with Nevers has given him stability and reassurance about his future.

“I have another two years left after this season. I signed a three-year deal last year. It is brilliant. The confidence I can take from it, the security it brings, not having to worry about moving or where I am going to be next year. It allows you focus on just playing rugby which is great. I am loving it as well.”

He continues to keep a close eye on how promoted Shannon have been faring back in Division 1A of the All-Ireland League.

“I am over the moon with how Shannon are getting on. I was home for the Young Munster game at Thomond Park. All my family are Shannon too. It is not the same Shannon team I was playing for, I don't know what is going on!”