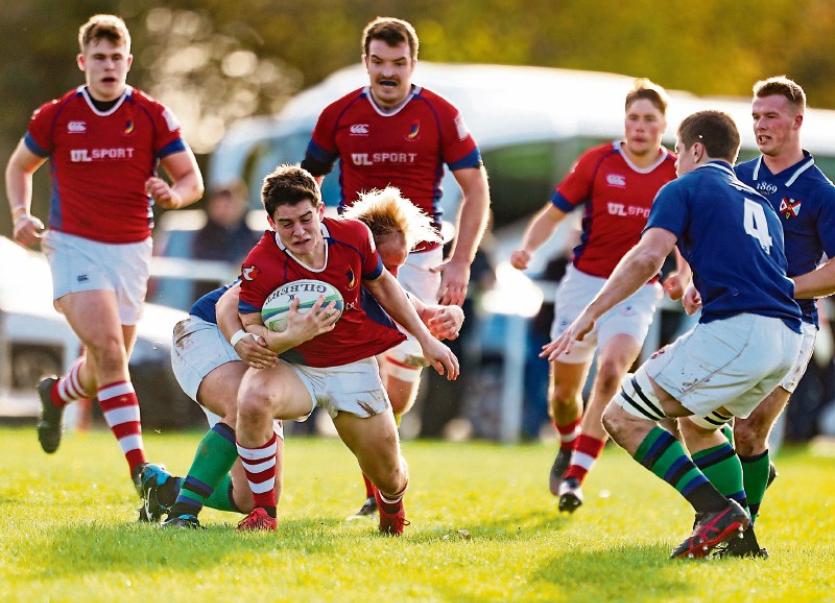 THREE of Limerick’s four sides operating in Division 2 of the All-Ireland League scored crucial wins on a dramatic day of action.

In Division 2A, fifth-placed UL-Bohemian got back to winning ways when scoring a deserved 36-24 bonus point success over QUB at Annacotty.

In the same division, Old Crescent ended their four-game losing run when edging past struggling Galwegians 13-12 at Crowley Park.

Meanwhile, in Division 2C, in-form Bruff made in five wins on the bounce when seeing off Bangor 15-10 at Upritchard Park.

In the same Division, ninth-placed Thomond are just one point ahead of basement side Tullamore after suffering a 38-15 defeat to leaders Midleton at Fitzgerald Park.

UL-Bohemian had a try bonus point in the bag at half-time when leading QUB 29-10 at Annacotty.

Hooker Joe Bennett helped himself to a brace of tries in the opening 40 minutes off well-executed mauls, while full-back Joe Murray and winger Thomas Ógie Scannell also dotted down in that opening period.

QUB rallied in the third quarter scoring two converted tries to trail by just five points, 24-29 inside the final 10 minutes.

However, a late try from centre Harry Fleming, converted by Bourke, sealed the maximum five-point haul for the Red, Red Robins.

Also in 2A, Old Crescent will be relieved to have edged their relegation clash with Galwegians by a single point.

Crescent trailed 3-5 at half-time, with the Rosbrien side’s points in the opening 40 minutes coming from a Ronan McKenna penalty just before the break.

The Limerick side added a crucial try from Gary Fitzgerald in the second half, while McKenna kicked a conversion and penalty.

‘Wegians scored a late try to trail by just a single point with five minutes remaining. However, the Rosbrien side held on to seal a vital win.

Bruff continued their excellent run of form in 2C with a fifth successive win, this time away to Bangor.

Bruff, three points off leaders Midleton, led their hosts 12-0 at half-time, thanks to tries from Cian Clifford and Liam Treacy, with Kevin McManus adding a conversion.

A further McManus penalty in the second half ensured Bruff secured the four precious league points on offer.

Ninth-placed Thomond now have just one win from their six league games in 2C after succumbing to a powerful Midleton side at Fitzgerald Park.

Thomond, who trailed 3-17 at half-time, scored two tries through Eoin Carr and Richie Ryan, while Evan Cusack added a conversion and penalty.