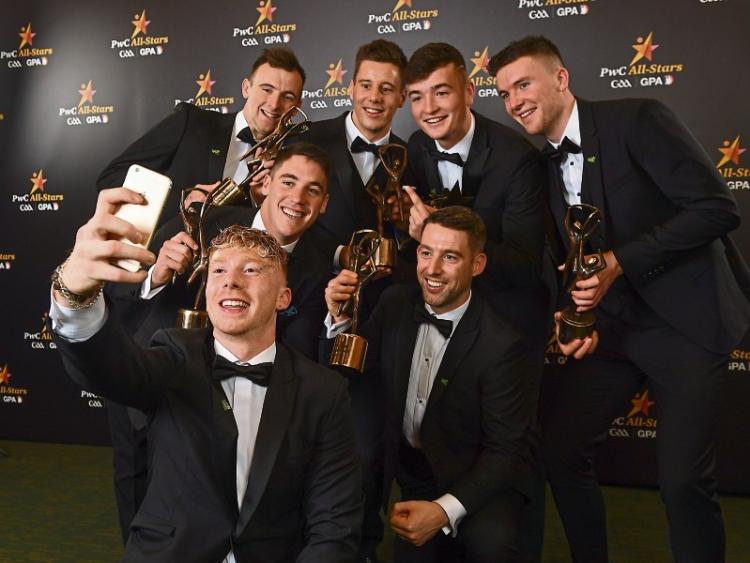 Celebration time at the PwC All Stars for the Limerick contingent

THERE were many up in arms over the Limerick representation on the All Star team but lets not lose any sleep.

Individual awards are merely an added extra for those involved in team sports.

Ultimately, Limerick got their greatest reward on August 19 in Croke Park when a 45 year famine was ended with the return of the Liam MacCarthy Cup.

That said, six All Stars!

As Jennifer Aniston once said in her famous L’Oréal advert: “Here comes the science bit—Concentrate!”.

Limerick, Galway, Cork and Clare are the four semi finalists and to be fair no more than a puck out of a ball between the quartet – extra time needed to separate Limerick and Cork and a replay needed to divide Galway from Clare.

So fair enough I guess to see no one team dominate the All Star selection – which is chosen by a select group of national GAA journalists.

I made ‘my team’ public via social media prior to the awards night and my team had 12 of the final selection. I had eight from Limerick and even then knew I was probably expecting too many.

From my team Nickie Quaid lost out to Kilkenny’s Eoin Murphy in goals. Yes Murphy made some fine saves and none more so than against Limerick. But Quaid provided one of the iconic moments of the year, which even garnered international attention. And, on top of that he was Mr Consistent throughout 2018 be it making saves or his top class distribution from puckouts.

My other Limerick selection was Kyle Hayes, who lost out to Cork’s Seamus Harnedy. For me Hayes was instrumental to everything that Limerick did in this championship. Padraic Maher, Austin Gleeson, Christopher Joyce, Cillian Buckley, Eoin Cadogan and Gearoid McInerney is a stellar line-up from centre backs and not one of them got as much of a puck of a ball when they came up against Hayes this Summer.

On top of that he chipped in with some key scores and was of course Man of the Match in the All-Ireland final.

I also had Galway’s Conor Whelan in my team and he lost out to Patrick Horgan.

Aside from Quaid and Hayes, Tom Morrissey was probably the other Limerick player that was unlucky to lose out.

Wearing my green hat, I would of course build a case for all 15 from Limerick to be included but across the boards I don’t think too many have issues with the selection from corner back to midfield and four of the six forwards were also probably ‘nailed on’. So that leaves the three other positions up for grabs and Cork got two and Kilkenny one.

I’ve stated previously that I’m not a big fan of individual awards in a team sport, but I was delighted for Cian Lynch and Kyle Hayes with their Player of the Year awards.

Two of the finest ambassadors across a panel of 36 players that have represented themselves and Limerick impeccably since returning the Liam MacCarthy Cup back Shannonside.

They are mature beyond their years and further awards will no doubt follow before the turn of the year and matters turn to 2019.