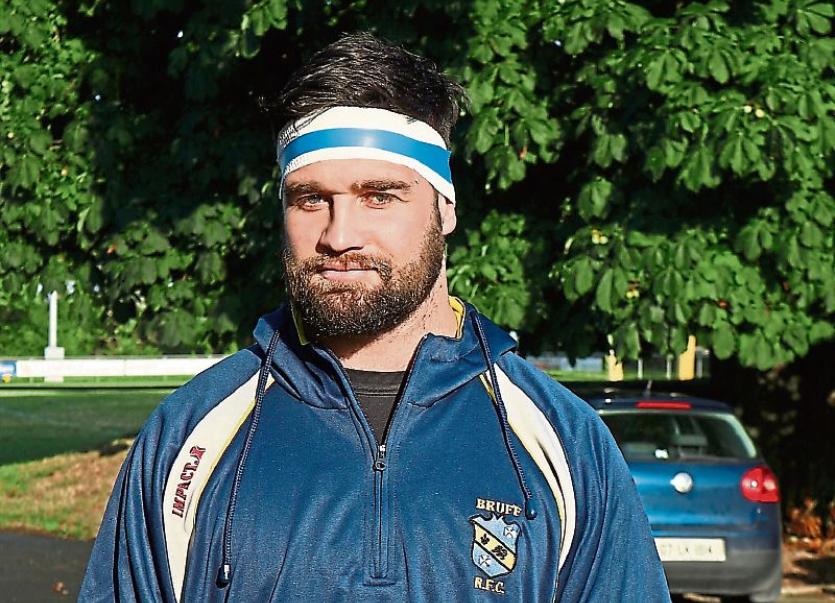 IT’S a long way from growing up in Tauranga, the biggest city in the Bay of Plenty region on New Zealand’s North Island, to lining out for Bruff in Division 2C of the All-Ireland League.

But the global nature of modern club rugby has resulted in dynamic 25-year-old flanker Taylor Jones making the transition from New Zealand’s fifth largest city and home to an estimated 125,000 people to the quiet, rural setting of Kilballyowen Park, Bruff in South Limerick.

It may be a national obsession in New Zealand, but Jones reveals that he was a late comer to the game of rugby, only taking it up when he attended secondary school.

Jones, fresh from scoring two tries in high-flying Bruff’s impressive 20-5 AIL Division 2C win over Seapoint at Kilballyowen Park on Saturday said: “Being from New Zealand everyone is playing rugby. I didn't actually play rugby until I got to secondary school. From there on, it has been rugby, rugby, rugby the whole way through.

“I never really got into sports when I was younger, but then becoming mates with guys who were so passionate about it got me involved and you get so many teams at secondary school level that there is no avoiding it.

“I never made ITM Cup, but I was playing for the development team which is the team below the Bay of Plenty seniors. I played for New Zealand Marist as I played for a Marist club (Greerton). They select a group of guys out of all the Marist clubs in New Zealand and we play against the New Zealand Heartland team.

“That was another step up which was cool. I hated been kept off development level, because I always wanted to make that next step.

“That is why I have taken the leap and taken the chance to come over here to Bruff, new experience, travel the world, play footy, have a bit of fun.”

Last May, Bruff needed to pull through a nail-biting relegation play-off against Bandon in order to preserve their All-Ireland League status for this season and were on the look-out for some new signings to bolster their playing squad and backroom team for this season.

Jones explained: “I have actually wanted to come to Ireland. It is one of the countries I wanted to go to. The guy I had approached about the possibility of going overseas for rugby said there was an opportunity in Ireland if you wanted to go for it and I said, ‘yes’.

“I spoke with the guys from Bruff, had sent them my CV, had an interview and away we went.”

A friend of Jones’, Bay of Plenty half back Te Aihe Toma spent time at Munster in the 2016/2017 season as injury cover on a short-term contract.

“A friend of mine, Te Aihe Toma, came over and played for Munster. He came off the bench a couple of times. I kept an eye on how we was getting on and when the All-Blacks played Munster in Limerick (10 years ago this month) I watched that game.

“I always knew who Munster were. I came to Bruff in late August, towards the end of summer. It has been good. New Zealand is pretty similar to Ireland in terms of farmland and everything. I have fitted straight in.

“The weather is getting colder than what it is back in New Zealand. That will take a bit of getting used to. The level of rugby here is good. I am having fun. That is what I am here for, have some fun with the boys, score some points, win games and see where we go from there.

“I am definitely loving the standard of rugby and the intensity the guys are bringing to our trainings, myself being the forwards coach as well, it is my first go at coaching. Having the guys commit to the level they are makes it really easy for me.

“I am working out in Sixmilebridge. It keeps me busy during the week and then on week nights and weekends it’s all rugby.

“I have heard about last season for Bruff and what happened, how they were looking good at the start of the season and then went on a big losing streak. I am pushing that to the side. For me, coming in fresh, it's new beginnings, just building up.

“We had that loss against Midleton in the first week of the AIL this season, but we have built from there. We are four wins on the trot and we have another big away trip next weekend and hopefully carry on that momentum.” he concluded.

Bruff face Bangor this Saturday away.