Munster take to the Bushveld as the Cheetahs lie in wait 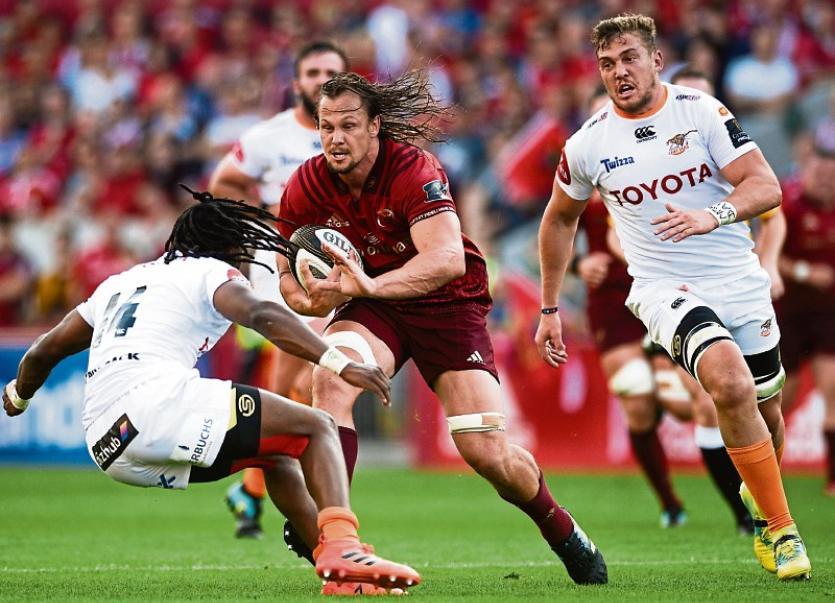 Munster in South Africa: Arno Botha of Munster is tackled by Rabz Maxwane of Toyota Cheetahs when the sides met in September. The two meet again on Sunday, live on Eir Sport

THE Munster squad, minus their Ireland internationals, is in South Africa this week preparing for Sunday’s Guinness PRO14 clash with the Cheetahs in Bloemfontein, 2.45pm Irish time.

The Munster squad is based in Johannesburg this week, before travelling to Toyota Stadium for this weekend’s game.

Munster arrived in South Africa fresh from their thrilling weekend PRO14 victory over Glasgow at Thomond Park when Rory Scannell secured the last gasp win with a terrific penalty goal from just inside the Scottish side’s half.

Turning to this Sunday’s game with the Cheetahs, head coach Johann Van Graan said: “It is very important, the Cheetahs on a Sunday afternoon at altitude. We are going to going to prepare at altitude for this week.

“This year we are taking the squad to Johannesburg and show them a bit of the Bushveld and then travel to Bloemfontein next Saturday to play a Cheetahs team that will be hungry. It will be a big challenge for us with a very young side going down to South Africa.”

Sunday’s game, which has a 2.45pm kick-off Irish time, will be televised live on eir Sport.

Toyota Cheetahs obtained their first victory of the 2018/19 campaign with their home win over Cardiff Blues last weekend.

However, Cheetahs have lost only two of their last nine encounters played in Bloemfontein and Munster have not won away from home in any tournament since they visited Bloemfontein in April.

Munster did thump the Cheetahs 38-0 in the opening round of this season’s PRO14 at Thomond Park at the start of September.

Munster’s travelling squad for South Africa includes New Zealand-born out-half Tyler Bleyendaal, who is now Irish-qualified. Bleyendaal played for Munster A against Leinster A earlier this month in the Celtic Cup and is moving ever-closer to a return to the province’s senior side after a long stint on the sidelines with a neck injury.

Prior to the squad departure to South Africa, Munster head coach Johann van Graan pledged his future to the province until his contract expires in June 2020 at least, ending speculation that he could return to South Africa to take up a role at the Blue Bulls Super Rugby side.

Van Graan, who took over from Rassie Erasmus as Munster head coach in October 2017, was last week linked with the position at the Super Rugby outfit following John Mitchell’s departure.

However, in the wake of Saturday’s dramatic PRO14 win over Glasgow, Van Graan insisted his future remains at Munster.

Van Graan said  “I am not going back to the Bulls. I have signed a contract until the end of June 2020 with Munster.

“I’m loving every single moment of it. You will always have approaches, there will always be speculation.

Victory for Munster over Glasgow at the weekend saw the Irish province move into third place in Conference A of the Guinness PRO14.

The game also brought the curtain down on a crucial five-game spell for Munster which saw PRO14 interprovincial derbies against Ulster and Leinster, following by a draw and a win in their opening two Heineken Champions Cup fixtures.

Munster had to come from behind to see off Glasgow on Saturday, scoring the last 15 points of the game to seal victory by a single point.

“I was pretty composed after an hour,” Van Graan said.

“I knew we had the wind on our backs. This club doesn’t know how to give up, that’s what Munster’s renowned for, we’re never beaten until we get back in the changing room.

“We’d three big wins at home and we knew a close one was going to come, I didn’t believe it was going to be that close, but this game keeps you humble and tonight the luck was on our side.”

Reflecting on his dramatic match-winning kick Rory Scannell said: “I didn’t even realise we were only down by two points prior to that kick to be honest.

“Keats (Ian Keatley) came up to me and asked if I wanted to have a go, he felt I’d have the distance.

“Myself, Billy (Holland) and Pete (O’Mahony) had a conversation and I said I was happy to kick it and thankfully it went over.

“I haven’t struck a kick that well in a while. It was ideal to save it for now. The heart was beating pretty hard, but I had to gather the composure a bit, go through my usual routine and just strike the ball as well as I could.

“All the lads rushed onto the pitch at full-time. They were on top of me before I knew it. I was on the ground, but it was great. There were great vibes in the dressing room afterwards which is ideal.

“We felt we had been on top in the game for most of the first half. Then 50-60 minutes in we were nearly chasing the game. Due to a few stupid penalties we kinda let them into the game.

“They got two tries and we were chasing then. We clawed our way back into it and kept fighting until the 80th minute.

“Glasgow always put it up to is, they are a quality side. There is a bit of a rivalry there now and it’s great. We all love playing Glasgow and they love playing us. It is always a tough contest and we felt we probably didn’t do ourselves justice over in Scotstoun this year, so we needed a big one and thankfully we got a result.”

After Munster’s return from South Africa, the Guinness PRO14 breaks for three weeks with the province’s next outing against Zebre on Sunday, November 25.