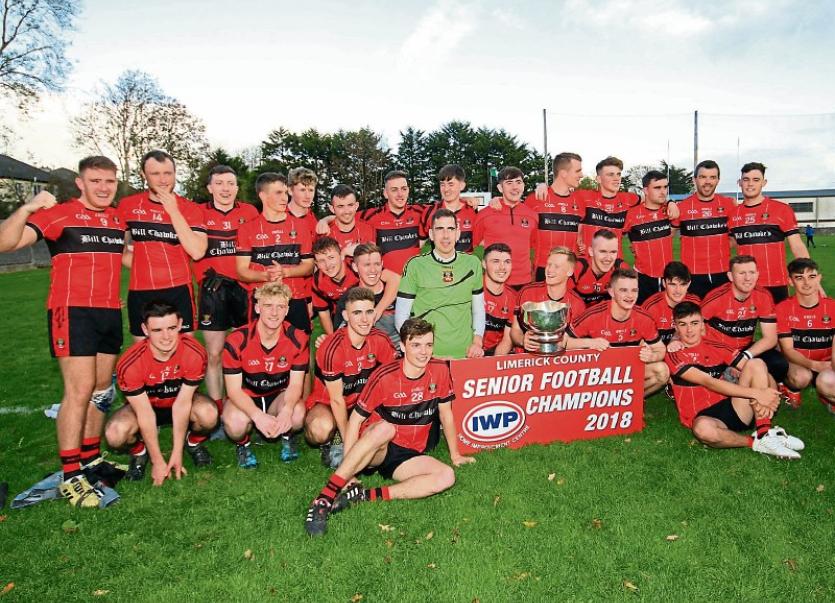 Adare celebrate their win over Ballylanders in the County Final

ADARE will represent Limerick in the Munster Senior Club football championship for the second consecutive season on Sunday afternoon at the Gaelic Grounds.

The Limerick champions meet Waterford's The Nire at 3,30pm in what is the second game of a double header featuring Na Piarsaigh and Clonoulty-Rossmore a 1pm.

Having tasted Munster club action last season, Adare senior football manager Harry Gleeson admits that his side are better prepared this season than they may have been for their meeting with Nemo Rangers in 2017.

“With the team winning the county for the first time last year, you are always more likely to have some extended celebrations. Maybe as a management group we learned how big a step up it is, even if we were there with the intermediates the year before. It certainly takes a little more time to learn from your experiences”

Sunday's opposition, The Nire, are the Waterford SFC champions for the third time since 2014, beating Kilrossanty 0-9 to 0-7 in the final last weekend.

Twenty-five years after claiming their inaugural senior football title, the Nire secured their ninth Conway Cup at Fraher Field in what was a tight and hard fought affair.

“They are a hardy, toughened side. They have great experience in Munster. I think they have played five and won three. Only losing to Kerry opposition when they have lost out. They are going to be very strong. They are a very physical side who are well able to play football too. Streetwise is the word I would use that might best describe them” admitted Gleeson.

Adare will have the benefit of home comforts this Sunday as they will tog out at the Gaelic Grounds, something Gleeson admits they were unhappy not to have been able to do for this season's county final.

“We were disappointed that we didn't get to play there for the county final. It is the blue ribband event and that opportunity didn't present itself to us. There are a lot of lads who may not get a chance to play at inter county level with Limerick and it is a great reward for those lads to play in the Gaelic Grounds having put in eight months of work. I think it is great to get the opportunity to play there now in the Munster club quarter final.”

Ahead of this weekend's clash, Gleeson admits that his side didn't do themselves justice against Nemo Rangers last season. .

“We didn't do ourselves justice last season in Munster. But it is up to us to raise the level of our performance this year, no one else can do that for us”

The winner of Sunday's game will take on Clare champions St Joseph’s Milltown-Malbay on November 11 at a home venue for the winner of the Adare and The Nire tie.