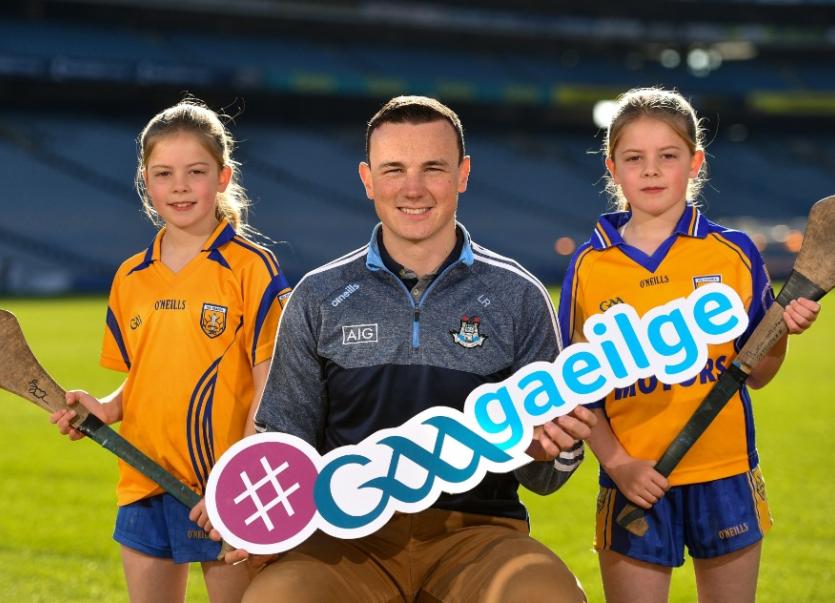 In attendance at the Seoladh na Gaeilge launch #GAAGaeilge is Liam Rushe of Dublin, with, Caragh Ní Chorcoráin, left, and Riona Ni Chorcoráin of Na Fianna

Uachtarán Chumann Lúthchleas Gael, Seán Ó hÓráin, today announced the various projects being undertaken at present by the Association regarding the Irish language.

He announced the appointments of the GAA’s first fulltime Irish Language Officer, Jamie Ó Tuama, who has worked in Irish language sector for over 20 years and is currently Oifigeach Gaeilge for his club, CLG Dhún Doire in Meath.

The GAA’s continued support for Fondúireacht Sheosaimh Mhic Dhonncha was announced, a scheme that is being administrated in conjunction with Glór na nGael.

Sean Ó hÓráin, Uachtarán also announced that bilingual signage was being distributed to every club in the country at present. This is happening as part of a joint venture between the GAA, An Roinn Cultuir, Oidhreachta agus Gaeltachta, Foras na Gaeilge and Glór na nGael. An Roinn Cultuir, Oidhreachta agus Gaeltachta funded the production of the signage.

Uachtarán Chumann Lúthchleas Gael, Seán Ó hÓráin, said: “The Irish language is at heart of the Association and we are better off as an association because of that. Our commitment to the language is clear from our appointment of an Irish language Officer earlier this month – and we wish Jamie Ó Tuama the best of luck in his new role.

Our commitment to the Irish language is also clear from the joint venture between the GAA, An Roinn Cultúir, Oidhreachta agus Gaeltachta, Foras na Gaeilge and Glór na nGael. The result of that coming together can be seen from the bilingual signage that is currently being distributed to clubs throughout the country.

Cathaoirleach Choiste Náisiúnta na Gaeilge, Seosamh Mac Donncha said “I believe the appointment of a fulltime Irish language officer has been most significant step taken by the GAA regarding the language. It shows that the GAA takes it’s role in promoting Irish within the Association very seriously.’’