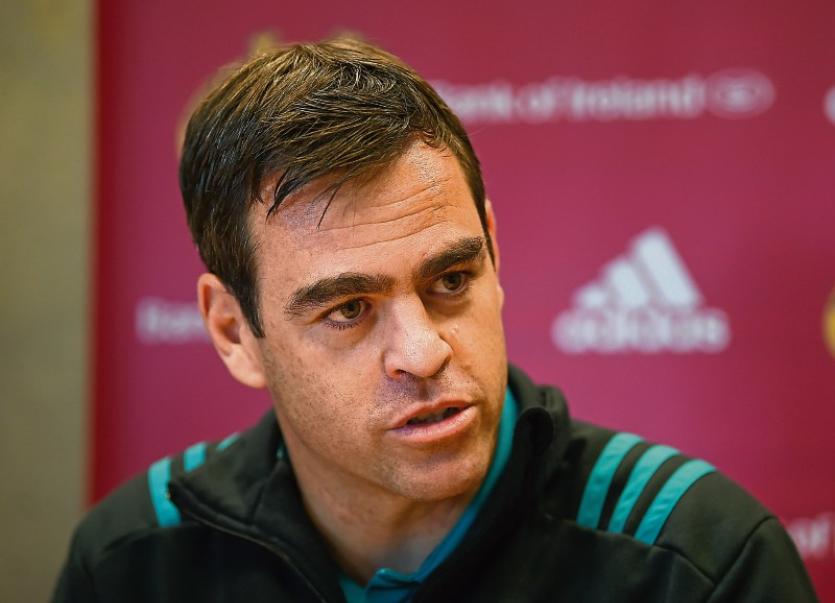 MUNSTER head coach Johann van Graan has pledged his future to the province until his contract expires in June 2020 at least, ending speculation that he could return to South Africa to take up a role at the Blue Bulls Super Rugby side.

The Bulls are looking for a replacement for John Mitchell, who has left to undertake the role of England’s defence coach.

However, Van Graan insisted his future remains at Munster when asked about the speculation linking him with a return to the Bulls.

Van Graan said: “I am not going back to the Bulls. I have signed a contract until the end of June 2020 with Munster.

“I’m loving every single moment of it. You will always have approaches, there will always be speculation.

Van Graan returns to his native South Africa with Munster this Bank Holiday Monday to begin preparations for Sunday’s Guinness PRO14 clash with the Cheetahs on Sunday next in Bloemfontein.

“We fly out on Monday (today) with a squad of 27 players. We are really thin at this stage. Obviously all the Irish guys are back and we have quite a big injury list, so looking forward to it.

“We are going to Johannesburg this year. Last year we went to Cape Town for the two-week trip.

“It is very important, the Cheetahs on a Sunday afternoon at altitude. We are going to going to prepare at altitude for this week and I thought last year we had the sea and the beautiful Cape Town.

“This year we are taking them to Johannesburg and show them a bit of the Bushveld and then travel to Bloemfontein next Saturday to play a Cheetahs team that will be hungry.

“They beat Cardiff 21-10 (on Saturday). It will be a big challenge for us with a very young side going down to South Africa.

“It is the last fixture for a while before we take our November break.”

After the Munster squad returns from South Africa, their next outing in the PRO14 is a Sunday, November 25 meeting with Zebre in Italy.