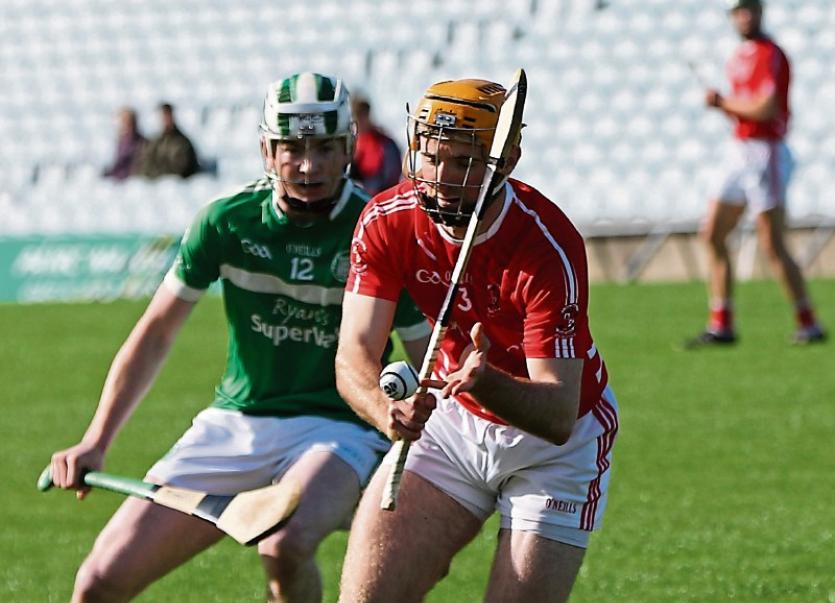 JUST a third ever Limerick SHC final appearance for Doon but they are anxious to make up for lost time.

“At the start of the year you are always looking to reach a final and jealous of other teams getting there, so we are delighted to finally get into the final,” said Doon captain Richie English.

The full back has All-Ireland medals at senior and U-21, Munster minor and Fitzgibbon Cup but it keen for the east Limerick side to break into the ‘big teams’.

“Since the turn of the millennium we have been in a lot of minor and U-21 finals and there or there abouts in a lot of them so we have had a lot of big games against a lot of the big teams and none other than Na Piarsaigh - we had a few great battles with them. At my age it started back at Feile, U-16, minor, U-21,” explained English.

“My first year playing senior was 2012 - my first year minor. We were at a different end of the senior championship that year; we drew with Effin in the last match and that was to stay in senior or we would have been into relegation. We have had our ups and downs since then - we had a few semi finals and quarter finals. We had a few nip and tuck matches with all the big teams,” outlined the teacher.

In the last two years Doon were eliminated in the knockout stages by the eventual champions – losing to Na Piarsaigh by four points last year.

“It’s probably one of the most competitive championships in the country in Limerick. Every year we have had Na Piarsaigh or Kilmallock knocking on the door of All-Irelands. It shows the levels that you are up against. A few big teams that are always pushing the standards up, which is great,” said English.

Can Doon dethrone the champions?

“To knock Na Piarsaigh off their perch it’s going to take a massive battle. On the day you have a lot of battles around the field and it will take a lot to get over the line. Each year they are touching All-Irelands,” said the Doon captain of the Caherdavin men.

“At the start of every year we have said it - we have been there or there abouts and it’s great to finally there. We have put in a lot of work for the last few years, from underage up. We have had the same core group of players for the last few years and we have been tackling the same teams. A few players coming into new positions maybe has helped but largely the same panel of players,” outlined English.

Doon’s manager is Tom Murphy – a native of Offaly’s Kilcormac-Killoughey but in east Limerick for over a decade.

On Saturday night, Murphy bids to follow in the footsteps of his native parish, who won a first Offaly SHC in 2012.

“The whole point of our year was to go one step further than last year and that was to reach this county final. It always looked to be a step too far but this year they really put the shoulder to the wheel,” said Murphy.

The 2018 Limerick SHC is the first year of the new ‘Super Six’ format.

“It worked well for us because we knew we had to focus and to win games to progress,” he said.

“You were playing all the top teams so you have to get a performance or you will suffer. In fairness to the County Board, the top four seeded teams were in the two semi finals and they were quality semi finals. Every team has a chance but if you want to win you have to beat the big teams.”

Beating Kilmallock in the final round of group games propelled Doon straight into the semi final and saw the men in red put down a marker.

“We wanted a big performance and they did. From the throw-in we tightened up on Kilmallock and didn’t let them hurl but what really pleased me was when Kilmallock came back at us and a point in it, our lads were able to kick-on again and that showed they wanted it and the hunger was there. To beat Kilmallock by seven points was serious stuff for us,” he outlined.

“There is a lot of work done of the last few years. It’s not overnight, the preparation even last year under Austin Buckley and Niall Rigney laid the ground work for this year. It’s a great achievement to get to the final, but when you are in a final, you want to win them,” stressed the Doon manager, Tom Murphy.