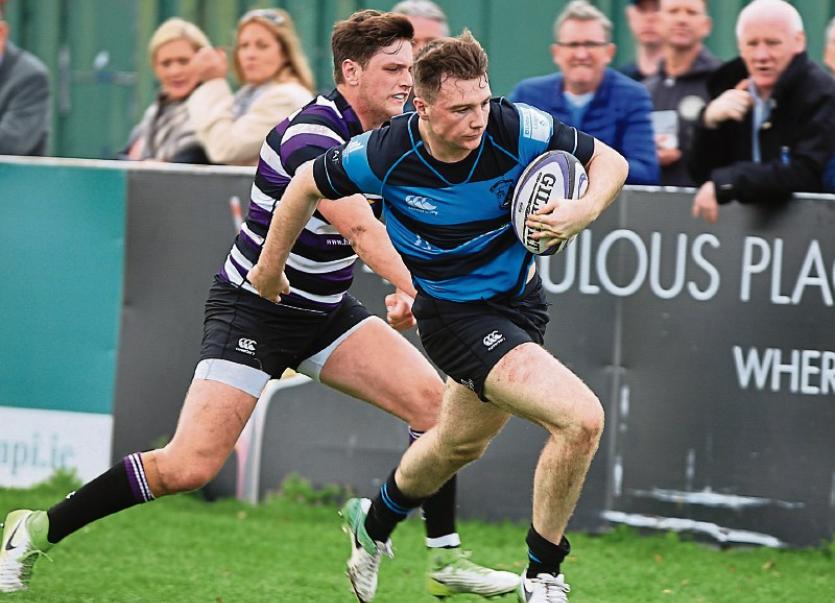 Shannon's Ger Finucane races down the wing to score a try against Terenure on Saturday at Lakelands Picture: Dermot Lynch

THIRD-PLACED Shannon look to continue their fine recent run in Division 1A of the All-Ireland league when hosting Clontarf on the back pitch at Thomond Park this Saturday, 2pm.

Tom Hayes’ Shannon followed up on their impressive derby victory over Young Munster with a 41-14 bonus point win over Terenure College at Lakelands on Saturday.

The Parish side scored six tries in all, from Nathan Randles, Aran Hehir, Pa Ryan, Eathon Moloney, Jake Flannery as well as a penalty try.

Nicholas provided the assist for winger Randles to open the scoring in the right corner after just two minutes.

Also in Division 1A, at 2.30pm, Garryowen will look to bounce back to winning ways when entertaining UCD at Dooradoyle.

The ‘Light Blues’, who included Munster hooker Mike Sherry in their squad, had 10 points from centre Peader Collins, consisting of a try, conversion and penalty.

Garryowen did the double on Clontarf last season and returned to the north Dublin venue in confident mood after wins over Dublin University and defending champions Lansdowne in the past fortnight.

They built a 7-0 half-time lead with their centres David McCarthy and Collins working well in tandem again, this time with Munster 'A' starlet and former Glenstal Abbey Munster Schools Senior Cup winner Ben Healy inside them at out-half.

Liam Cronin and Connacht Eagles flanker Mikey Wilson also stood out for their work-rate up front, which paved the way for Collins' converted towards the end of the first quarter. 'Tarf turned around with the wind at their backs in the second half, however, scoring 28 unanswered points.

Meanwhile, also in the top flight, Young Munster, fresh from their victory over UCC at Clifford Park on Friday night, face a trip to College Park to take on Dublin University this Saturday.

The win over the Cork students was the perfect response from Munsters’ to their comprehensive defeat to Shannon the previous week.

Munsters’ are currently fourth in the table, just one point behind neighbours Shannon.

Munsters’ and UCC shared six tries evenly in Friday night’s floodlit fixture at Greenfields, which the home side led 15-10 at half-time.

The winners’ tries came courtesy of tighthead Colm Skehan had barrelled over at the end of a punishing set of phases from the forwards, flanker Dan Walsh and centre Evan O'Gorman, following good work by his midfield partner Derek Corcoran.

Limerick’s four sides competing in Division 2A and 2C return to action this weekend after enjoying a free weekend.

Meanwhile, in Division 2A this Saturday, sixth-placed UL-Bohemian face a trip to Stradbrook to take on Blackrock College, the side sitting one place above them in the table.

Also in Division 2A, Old Crescent will look to bounce back to winning ways when hosting table toppers Navan at Rosbrien.

Crescent suffered a 26-21 defeat to Dolphin in Cork in their most recent outing.

In Division 2C this Saturday, fifth-placed Bruff host Ballina at Kilballyowen Park, while Thomond, sitting in seventh-place in the table, are on the road to Malahide.