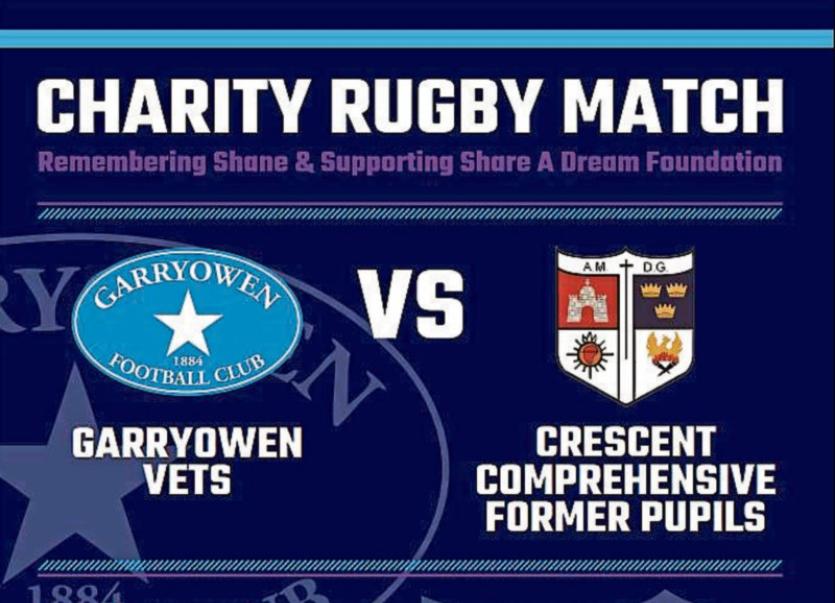 Vets and Former Pupils to go head to head

A SPECIAL charity rugby match is to take place next month to honour the memory of Garryowen thirds player Shane Geoghegan who was shot in a case of mistaken identity 10 years ago.

Garryowen Veterans will face Crescent Comprehensive Former Pupils in the charity game which will go ahead at Garryowen FC, Dooradoyle on Friday, November 9 at 7pm.

All proceeds from the night will go to the Share a Dream Foundation.

Twenty eight-year-old Shane Geoghegan was shot dead in a case of mistaken identity a few short hours after lining out for his beloved ‘light blues‘ in a Gleeson League game against Shannon at Coonagh on November 9, 2008.

As well as the Over 35s rugby fixture, the evening’s entertainment on November 9 will also include live music, a BBQ, as well as a raffle and auction, when proceeds will again go to the Share a Dream Foundation.

Garryowen FC have been hosting the annual Shane Geoghegan Memorial Rugby Tournament at Dooradoyle to honour the former prop’s memory.

A trust in Shane Geoghegan’s name was established in 2009 to work with children through community projects and try and bring about some good from the tragedy.

On the fourth anniversary of Shane’s death in 2012, and after working with hundreds of children through the innovative Street Games project in Kilteragh, Moyross and Ballinacurra in conjunction with the Limerick City Sports’ Partnership, the trust was wound up.

Meanwhile, Clayton Hotels have confirmed that they will enter a third year of sponsorship of the Munster Rugby Schools Senior and Junior Cups.

At school’s level, Clayton Hotels will provide venues for post-match meals for teams playing locally in the Cork and Limerick areas as well as hosting informational events to engage with parents, pupils and schools.

Speaking about the partnership, Patrice Lennon, Head of Sales and Marketing, Dalata Hotel Group PLC said, “At Clayton Hotels, we are proud to continue our support for Munster Rugby.

“We look forward to sharing in the excitement of the upcoming season of schools and professional rugby and welcoming both teams and supporters to our hotels.

“We look forward to seeing Munster Rugby go from strength-to-strength.”

Doug Howlett, Head of Commercial and Marketing at Munster Rugby said: “We are delighted to continue our partnership with Clayton Hotels.

“The Munster Schools Senior & Junior Cups are centre pieces in our rugby season. With the support of Clayton Hotels, we will continue to inspire and develop more talented Munster players.”