Munster host the Glasgow Warriors before jetting off to South Africa 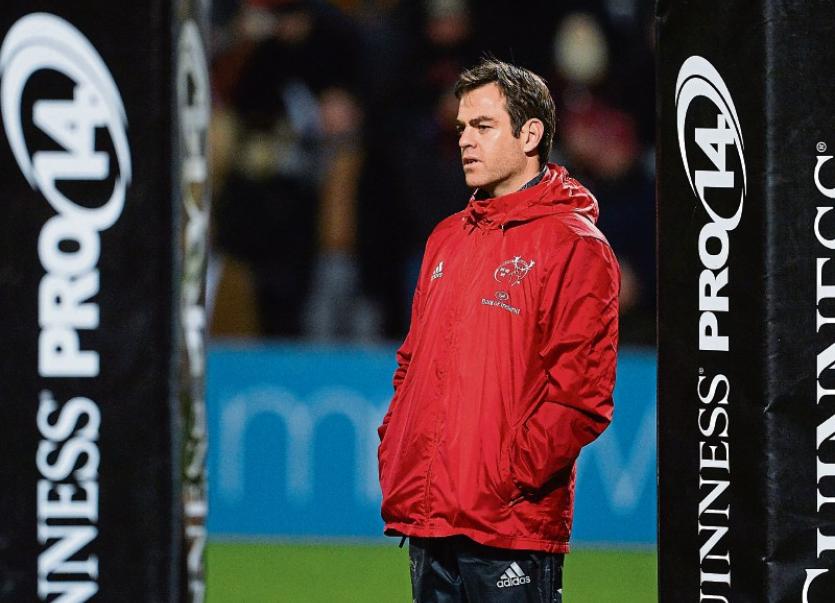 MUNSTER resume their Guinness PRO14 programme of fixtures with a crucial outing against Glasgow Warriors at Thomond Park this Saturday, 5.15pm, live eirSports.

Munster head coach Johann van Graan is set to rotate his squad this weekend after the province’s hugely demanding schedule which saw interprovincial fixtures against Ulster and Leinster followed by Champions Cup outings against Exeter Chiefs and most recently Gloucester.

Munster will be anxious to improve on their poor discipline record when they host Conference A leaders Glasgow at Thomond Park on Saturday.

Glasgow lead fourth-placed Munster by 10 points in the table as the Irish province has won their three home games in the league, but lost all three on the road.

One of those defeats came against Glasgow at Scotstoun in early September when Munster suffered a 25-10 thumping after a very poor first half showing.

Munster received positive news this week on the injury front with confirmation that flanker Tommy O’Donnell did not break his leg in Saturday’s Champions Cup win over Gloucester.

Head coach Van Graan said: “It’s great news. We take that as a big positive. Medical staff looked at what happened after the game and the pain and how they took him off. It’s brilliant news.

“Just look at that ankle, the damage will be significant. Anything I get now positive is great of you just look at our loose forwards at this stage: Tommy out, Jack O’Donoghue out, Dave O’Callaghan out, Conor Oliver out, Arno (Botha) possibly, and then Pete (O’Mahony) and CJ (Stander) and Tadhg (Beirne) possibly going to Ireland leaves you really thin at this stages.”

Munster, who are due to travel to South Africa next week, to face the Cheetahs on November 4, may see a welcome return to action for their New Zealand out-half Tyler Bleyendaal in the upcoming games.

Twenty eight-year-old Bleyendaal has not played for Munster’s senior side since last February, although he did feature for the province’s A side in their recent Celtic Cup fixture with Leinster A.

Bleyendaal required surgery in March in a bid to rectify ongoing symptoms with his neck.

Van Graan said: “We’ll do what we believe is the best for Tyler, gradually bring him back. He’s training well, putting a bit of lead into his legs, putting him through his paces but we’ve also got Keats (Ian Keatley) and JJ (Hanrahan) and Bill (Johnston) and over the next two weeks we’ll make a few changes to the team.

“One of the things that I’ve learned from previous coaches at Munster is that especially after a European block you are going to lose guys and you also need to freshen up your team because of the emotion of the last three weeks actually, the Leinster game as well.

“And we’ve got to fly to South Africa next Monday. So yes, Tyler might get some game time as we look to freshen it up over the next two weeks.”

Van Graan described 23-year-old scrum-half Nick McCarthy, who is joining the province from Leinster next season, as a ‘brilliant young player.’

“I think he is a brilliant young player. He was captain of the Ireland U-20s, I believe. I like his passing game a lot and I like his running game. He’s a player on the brink of taking the next step and I felt that’s a player that can add value to our squad.

“We did our research and it was an opportunity, it was coming to the end of his contract and we signed him.”

Van Graan said no decision on if any of the scrum-halves out of contract this season would be retained next season.

“I don’t want to discuss individual players, but at certain stages you look at your squad and certain guys move on.

“Last season we lost a few guys as well and that’s just part and parcel of professional rugby. Our communication has been constant and clear, on a human side you always want to keep all of our players but you can only have so many.

“It’s a nine coming in and we’ll make our decisions later in the season on the nines that we currently have.”

Munster’s Ireland players will gather for the autumn internationals next week.