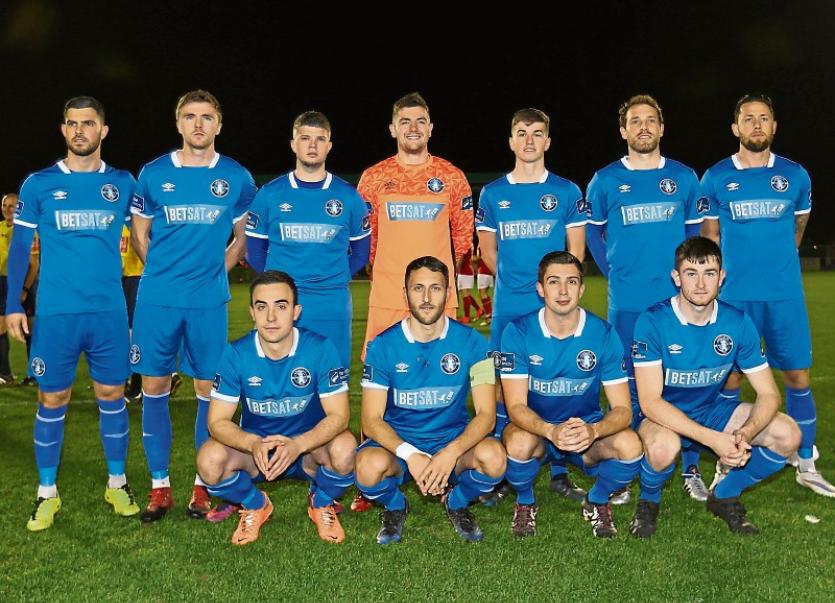 The Limerick FC side who will battle Finn Harps tonight

Limerick, who finished second-from-bottom in the Premier Division, travel to Finn Park, Ballybofey to take on Ollie Horgan’s Harps side in the first leg of their two-leg relegation play-off on Bank Holiday Monday night, 7.45pm.

Limerick will then host the Co Donegal side in the second leg of their play-off at the Markets Field on Friday, November 2.

Limerick faces an uncertain future off the field too as the High Court adjourned an application by the Revenue Commissioners to wind up Limerick FC on Monday.

Barrett’s side face two games in three days this weekend as the Blues play their final Premier Division regular season fixture against Waterford FC at the RSC this Friday, 7.45pm, before travelling to Ballybofey for the season-defining play-off.

While on-field matters will occupy Limerick face for the next week, off the pitch, Limerick are concerned about matters in the High Court.

On Monday, the Revenue's collector general has petitioned the High Court to have Munster Football Club Ltd, which trades under the name Limerick FC wound up and a liquidator appointed arising out of an alleged failure to pay a demand for unpaid taxes including PAYE and PRSI.

The demand was made on the company, with a registered address at Kirby O'Sullivan Sports, Social & Business Park, Kilmallock Road, Bruff, in mid-September.

The matter was briefly mentioned before Mr Justice David Keane at the High Court on Monday.

Dermot Cahill, Bl, for the Collector General, told the court that the parties have agreed that the petition could be adjourned for three weeks.

The amount of money revenue seeks from the team in its demand was not mentioned in open court. The petition is expected to be dealt with on that date.

Looking ahead to the upcoming relegation play-off Blues boss Barrett said: “I think genuinely Finn Harps are favourites. They have the momentum. They have better resources for us.

“They have more experienced players. They got lads in on-loan. Up in the North West, they can pull from professional leagues, Derry play in the Ulster Senior League. We don’t. We are missing that pyramid around here.

“They are well organised, well drilled. They’re a good side.”

Indeed Harps have only lost once in their last 14 games — an FAI Cup exit at the hands of Premier Division champions Dundalk.

The play-off games will be the final outing’s before retirement for Harps’ 34-year-old winger Paddy McCourt, the ex-Northern Ireland star, who enjoyed a spell at Glasgow Celtic, and who is nicknamed the ‘Derry Pele’.