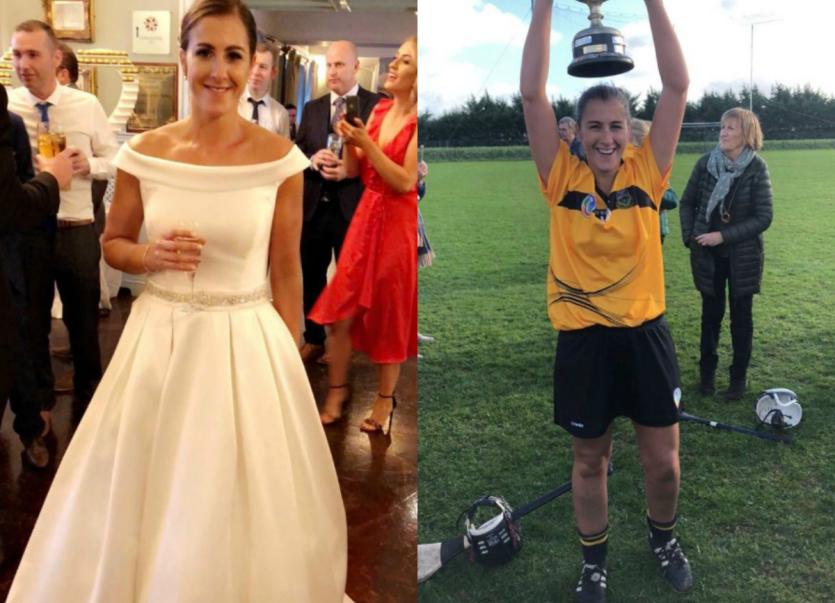 A winning weekend for Aine O'Reilly

On Saturday O'Reilly married her long time partner Paudie O'Dwyer and then 24-hours later she was full forward on the Ballyagran team that won the Limerick intermediate camogie championship!

"I just thought there was no point training all year and miss out on the county final, I would have been gutted not to have played a part in yesterday’s win," the newly wed told the Limerick Leader this Monday.

The camogie final was a replay - the sides level after extra time the previous weekend; Ballyagran 1-8 Crecora 1-8.

"When we drew last week and the replay was fixed for the day after my wedding I was always going to play it," said O'Reilly. Her side won the replay 1-10 to 2-6 in Croagh.

"With Garryspillane in the county final as well we could hear a few footsteps leaving the church," she joked.

"I was lucky I got my father (John Joe, a Garryspillane club official) to walk me up the aisle I thought he would make a run for it back to Kilmallock!"

As it turned out, Garryspillane also claimed silverware and the newly weds were able to follow the final stages on a smartphone as the wedding car journeyed from Knocklong to Bunratty.

The wedding reception was in the Bunratty Castle Hotel and after they celebrated late into the night, Aine was up bright and early on Sunday morning for her county final in Croagh at 2pm.

"A great weekend for the black and amber with two intermediate cups," said Aine, ahead of departing on their honeymoon this Tuesday.

On Sunday night, the weekend celebrations continued with the wedding party and two championship cups in The Hill Bar in Knocklong.