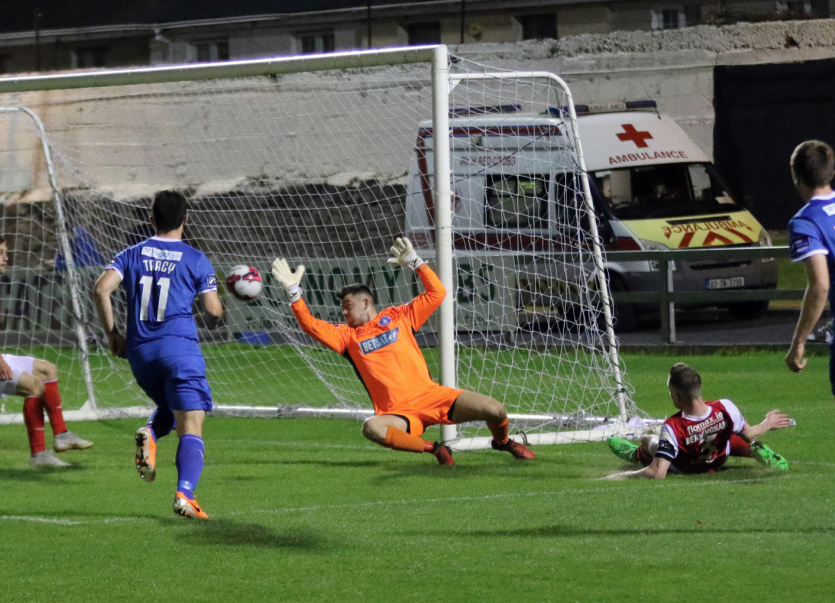 STRUGGLING Limerick FC are set to new rivalry with old foes Finn Harps in the SSE Airtricity Premier Division relegation play-off at the end of the month.

While Limerick were slumping to a comprehensive 4-0 defeat to St Patrick’s Athletic in their final home Premier Division regular season fixture on Friday night, Harps were advancing to the play-off final after recording a precious 3-1 aggregate win over Drogheda Utd.

Limerick, who suffered relegation from the Premier Division on the back of a two-leg play-off defeat to Finn Harps in 2015, will travel to Finn Park. Ballybofey for the first leg of the play-off on Bank Holiday Monday, October 29.

The Blues will then host the Co Donegal side in the second leg at the Markets Field on Friday, November 2.

Limerick will need a significant improvement on their showing of recent weeks in the Premier Division if they are to maintain their top flight status for next season.

Limerick have managed to win three times at home in the Premier Division this season and the ‘Blues’ have scored just 10 goals in 18 league outings in Garryowen this season.

The Inchicore side has won all four of their Premier Division meetings with Limerick this season. During that time, the Shannonsiders have managed to score just one goal as the Dubliners recorded two 1-0, a 2-1  and now a 4-0 league successes.

Before a spase attendance at the Markets Field on Friday, lacklustre Limerick fell behind as early as the 10th minute when Kevin Toner blasted to the ball low into the net after the home side failed to clear a corner.

Ten minutes later, the Saints made it 2-0 when Jake Keegan fired past Jack Brady. Ian Bermingham pulled the ball across the box for Keegan to tap in and a terrifc crossfield ball from former Blues’ player Conor Clifford.

Only a terrific save from Limerick ‘keeper Brady prevented St Pat’s from going 3-0 up in the 42nd minute as the visitors continued to hold the upperhand.

Two goals in two minutes at the start of the second half killed off any fading hopes Limerick had of staging a comeback.

Saints made it 3-0 three minutes into the second period when keeper Brady didn’t manage to control a Colman Kennedy back pass which sneaked into the net.

Simon Madden added the fourth goal for the Inchicore side moments later as Limerick’s defence was found wanting once again.

It was a bitterly disappointing night for the Shannonsiders who are limping into their relegation play-off tie with Finn Harps.

Limerick FC complete their programme of regular season games with a date against Waterford Utd at the RSC on Friday next, October 26.