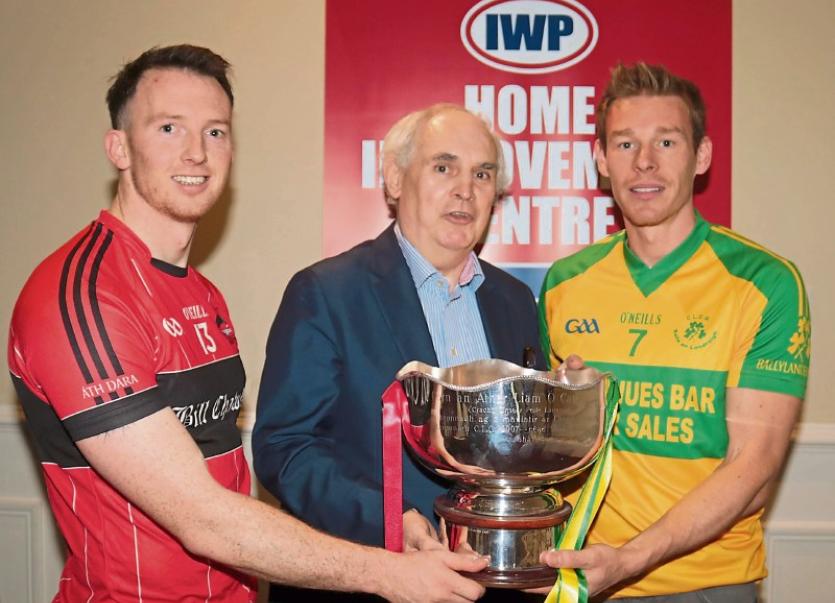 Aodhan O'Connor of Adare, Paddy Mulvihill of sponsors Irish Wire Products and Stephen Walsh of Ballylanders, are pictured at the launch of this Sunday's County Senior Football Championship

THE top three trophies in Limerick Gaelic Football are up for grabs this weekend.

Adare play Ballylanders in the decider of the Irish Wire Products sponsored championship. It’s a first ever final meeting of the pair with Adare looking to join 10 previous clubs to win back-to-back titles.

The curtain-raiser in Newcastle West is the Woodlands Hotel Limerick JAFC final – Cappamore against Kildimo-Pallaskenry at 1pm.

That final will come 72-hours after some of the Galbally players line out with Garryspillane in Saturday’s LIT Limerick Premier IHC final in Kilmallock against Bruff.

Sunday’s Limerick SFC final between Adare and Ballylanders is the main event of the weekend and Harry Gleeson manager of the defending champions is hoping his players can prove 2017 was no fluke.

“I am really happy for the lads this year because I felt the whole county didn’t give the lads the fair respect that I think they deserved for the time, effort and commitment that they put in to pull that off last year. This year I am really pleased for them and they are able to deal with the process a whole lot better this year - they are mature beyond their years,” said Gleeson.

“I am really happy that the lads are where they are on the back of last year - teams are now trying to set up to take us on and that is a sign they are giving us a bit more respect, which I think is only fair for the boys.”

In an effort to ‘up the ante’ Adare added former Limerick senior football manager Maurice Horan to their backroom team this season.

“I think we were really lucky and felt we had fallen out of a plane and landed on our feet to manage to secure both Niall Crowley and Maurice Horan because what they bring to the lads is tremendous,” said Gleeson.

The Adare manager insists that his side’s win over their final opponents earlier in the year will have no bearing on Sunday.

Harry Gleeson added: “We have huge respect for Ballylanders because they have a lot of experienced players and players that know how to win because they did it in 2014. That hunger is there as well. We are looking at this as a completely fresh, clean game and not going back on any of the older games because I think that would be a mistake”.