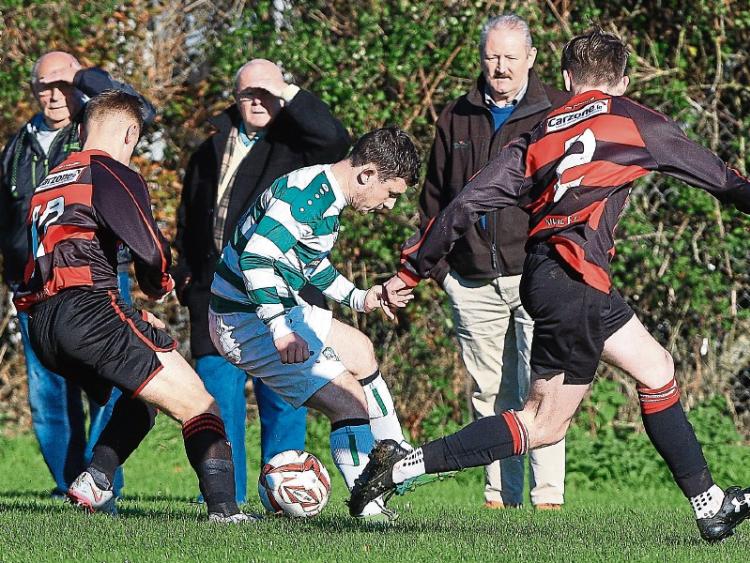 While the FAI Junior Cup would normally take top billing, this weekend most focus will be on the Premier League game of the day between Ballynanty Rvs and Pike Rvs at LIT on Sunday afternoon.

Both teams go into the tie unbeaten with the hosts boasting the only 100% record in the top flight after 12 games.

The ‘Blues’ have been rock solid all season and improving with every game.

Dermot Fitzgerald’s more advanced role this season has had the desired effect as his 15 goals to date proves.

Shane Guerin’s return has seen him settle in immediately with Ken Meehan to settle the defence and Aaron Nunan is showing again that he is a proven goal scorer at any level.

They meet a Pike side on the crest of a wave. They have netted an amazing 59 goals in their last 7 games which is a frightful statistic for any defence.

Manager Mike Shiels has moulded a superb collection in Crossagalla where the competition for places is fierce.

As is always the case when Balla and Pike meet all previous form goes out the window but with the form of both sides it is hoped we get the game we are hoping for.

Third placed Janesboro will keep on track with a visit to Charleville and likewise Geraldines will be expected to take the spoils versus Carew Park.

In the FAI Junior Cup, the tie of the day in the FAI is the all-Premier clash between Nenagh and Regional Utd. Much has been made of Regional's form this season while Nenagh's steadying of the ship has gone largely unnoticed.

The Tipperary side suffered several defections pre-season but seem to have a settled side now and will give Regional a tough time.

The Dooradoyle side have been superb and if Sosuke Kimura and Sean McSweeney are on form and barring complacency should be good enough to move a step further.

Prospect Priory had a tough game last week versus Hill Celtic and face another difficult tie this week when Coonagh come to Cals Park. The Division 1A side have plenty of firepower to trouble the home side so Derek Braddish needs his side to be on guard.

Fairview Rangers were disappointed to crash out of the MFA last weekend to ‘Boro and will be determined to get back to winning ways with a home tie versus Caherconlish.

Aisling Annacotty on their current form should have too much in store for the visit of Caherdavin Celtic and Newport Town are well favoured to see off Patrickswell.

Kilmallock Utd face a resurgent Hyde Rgs side while one of Abbey Rvs or Granville Rangers will be in Round Four, a feat they hardly saw at the start of the season.

Moyross Utd v Shelbourne could prove one of the better games that could go either way and Holycross v Murroe makes up the list.

In Division 1A Athlunkard Villa will be hoping to get back to winning ways at home to Cappamore while Fairview B will be looking to close the gap at the top when they visit Aisling.

The top game in the lower leagues is in STA Furniture Division 3A where promotion hopefuls Wembley Rvs host Kilmallock in UL.

The FAI Under 17 Cup kicks off locally with three games down for decision. Fairview Rgs host Cappamore, Corbally Utd welcome Ballymackey to Limerick and in the top game Kilfrush will be hoping to lower the colours of League leaders Aisling.