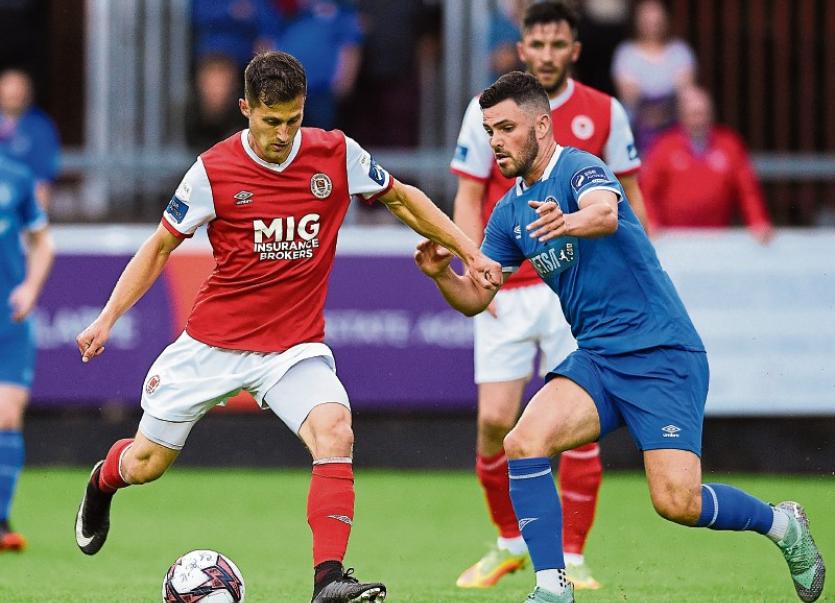 Home comforts: Jake Keegan of St Patrick's Athletic in action against Darren Murphy of Limerick when the sides met in July. Limerick play their final home game of the season on Friday Picture: Matt

Tommy Barrett’s Limerick side also have their sights set on their two-leg Premier Division relegation play-off with either Finn Harps or Drogheda Utd at the end of the month.

Harps and the Drogs’ finished level, 1-1, after the first leg of their play-off fixture at United Park. The sides go head-to-head this Friday night at Finn Park, Ballybofey with the winners facing Limerick in a season defining tie.

Limerick were relegated from the Premier Division in November 2015 when losing out in a two-leg play-off to Finn Harps after extra time in Ballybofey.

Limerick are on the road for the first leg of the relegation play-off which will take place on Monday, October 29, while the return game at the Markets Field goes ahead on Friday, November 2.

St Pat’s currently lie in fifth place in the Premier Division table, 17 points ahead of the Blues.

The Inchicore side has won all three of their Premier Division meetings with Limerick this season. During that time, the Shannonsiders have managed to score just one goal as the Dubliners recorded two 1-0 and a 2-1 league successes.

Following this Friday’s game with St Pat’s at the Markets Field, Limerick FC complete their programme of regular season games with a date against Waterford Utd at the RSC on Friday, October 26.

Off the pitch, Limerick FC manager Tommy Barrett is confident club chairman Pat O’Sullivan is doing his utmost to ensure the club is not wound up at the end of the month.

Recent reports suggest Limerick FC is facing a winding up order. It has been reported that Revenue’s petition will be heard this Monday, October 22 in the High Court.

Barrett said: I’m sure (Limerick FC Chairman) Pat (O’Sullivan) is trying his best to sort it.

“He has been looking for investment all year and if anyone can sort it out, I think he will.

“The last thing he will want to do is leave the club go to any bad terms. He is trying his best to keep the wolves from the door and I’m sure he will sort it out.

“Obviously it would be terrible if the club is wound up. There is nothing we can do about that. All we can do is look at results on the pitch and try and stay in the league.

“We will continue to try and do that. That is for the powers to be to decide.”

Limerick have managed to win three times at home in the Premier Division this season.

The ‘Blues’ have scored just 10 goals in 17 league outings in Garryowen this season.

Limerick go into Friday night’s game with St Pat’s on the back of a 3-0 defeat to Premier Division runners-up Cork City at Turners Cross on Friday night.

The defeat means Limerick have now lost four of their last five league fixtures, conceding 10 goals, while scoring just two in that spell.

With that relegation play-off looming large for the Blues, manager Tommy Barrett will be seeking some encouraging displays in the closing regular season games as his side look to gain some confidence going into the two-legged tie.

Barrett fielded an experienced-looking side for the clash at Turners Cross, making three changes to the side that went down 1-0 to Derry City the previous week.

Visitors Limerick got off to the worst start possible falling behind inside two minutes, when Kieran Sadlier played Jimmy Keohane in and the City player had plenty of time in the box to take aim before firing a shot in off the underside of the crossbar.

Despite that early body blow, Limerick recovered and created a couple of really good chances to equalise.

Barry Maguire went close midway through the opening half when his effort had Cork ‘keeper Peter Cherrie worried, but the ball flew narrowly past the angle of the City keeper’s post and crossbar.

Cherrie had to pull off a superb save to tip Morrissey’s volley around his post in the 32nd minute.

Limerick trailed by just a single goal at half-time. However, the Shannonsiders shipped a crucial second goal at the start of the second half when Limerick failed to clear the danger properly and Shane Daly-Butz and Keohane combined to create the opening for Sadlier to grab a second goal for John Caulfield’s side.

The attendance at Limerick’s last home league fixture against Derry City was the smallest at a home Premier Division fixture this season and the Blues will hope for a bitter turnout for the visit of St Pat’s.

That St Pat’s game will be Limerick FC’s final home tie before the second leg of the relegation play-off.

Barrett said: “It makes a big difference to have the support. When the Markets Field is rocking it’s really good. It helps.

“We have to do it on the pitch as well. No matter what they say, most people in any part of the world in any country want success and they want to be winning.”