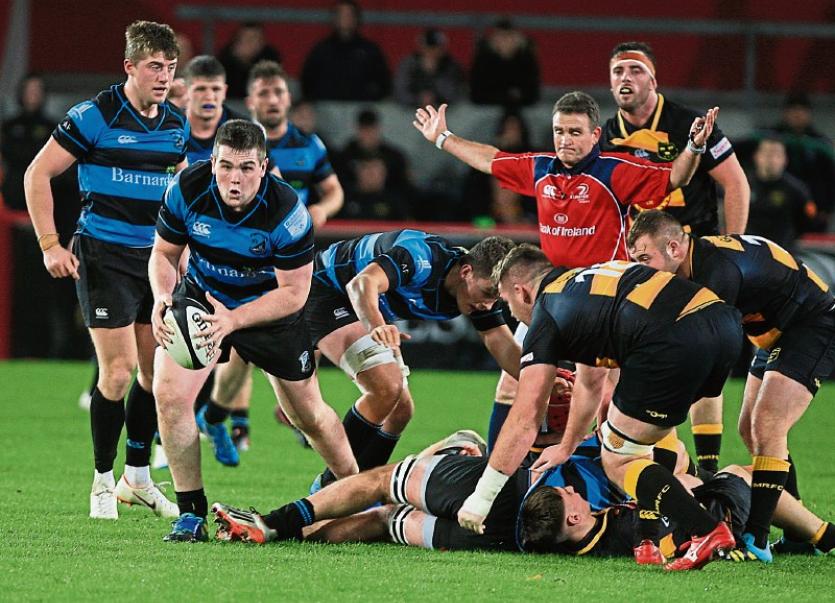 Young Munster, smarting from their comprehensive derby defeat to Shannon last time out, are first into action in Division 1A when facing UCC at Tom Clifford Park on Friday night, 8pm.

On Saturday, Garryowen, who boast two wins from their opening pair of Division 1A fixtures, will look to make it a hat-trick when travelling to Castle Avenue to face Clontarf.

Conan Doyle’s Garryowen side left it late before scoring a gritty 17-14 victory over holders Lansdowne at Dooradoyle on Saturday.

Munster’s failure to make the final of the inaugural Celtic Cup is likely to see a host of Munster Academy players being released back to play with their club sides in the coming weeks.

However, very few, if any, of those players are likely to see gametime with their club sides this weekend due to their hectic playing schedule in recent weeks.

Young Munster will be desperate to record their second win of the campaign when hosting promoted UCC at Greenfields on Friday.

Munsters’ will be bitterly disappointed with their second half showing against Shannon at Thomond Park last Friday when the Parish side dominated territory and possession.

Munsters’ failed to record a score in the second period and indeed were penned deep inside their own half for long stages of the derby.

“This is the AIL. You are going to lose games. everyone is going to beat everyone, but you have to bounce back.

”We have to respond and the defeat will test the character of the team.”

Shannon will have taken great confidence from their 23-10 victory over their local rivals.

Indeed, that confidence will be mixed with a degree of frustration at not having crossed for a fourth try and a bonus point on the day.

However, for a young side, promoted as champions of Division 1B at the end of last season, this was a very encouraging display.

Saturday’s opponents Terenure currently prop up the 1A table.

Shannon head coach Tom Hayes said: “The real benefit of the win over Munsters’ was that we managed to keep our composure, play in the right areas of the field as much as we could.

”Tactically, in general, I felt we played very well overall in terms of kicking and running. That worked out well for us.

“When you analyse it in the cold light of day you look and feel there is still plenty of try chances that we left go abegging and we have to get more clinical in those situations.

“The win was important (on Friday). But even parking that for a minute, for me, it was about the error count and how we performed really.

“I think that is what hurt us the two previous weeks.

“We made a lot of errors there our own doing rather than from opposition pressure. Ironing those out ultimately proved to the boys that you operate at that standard where you don’t give the opposition chance and you make them earn what you get.”

Four other Limerick clubs, Old Crescent, UL-Bohs, Thomond and Bruff, are not in AIL action this weekend as the Division 2 programme takes a break before resuming on October 27.