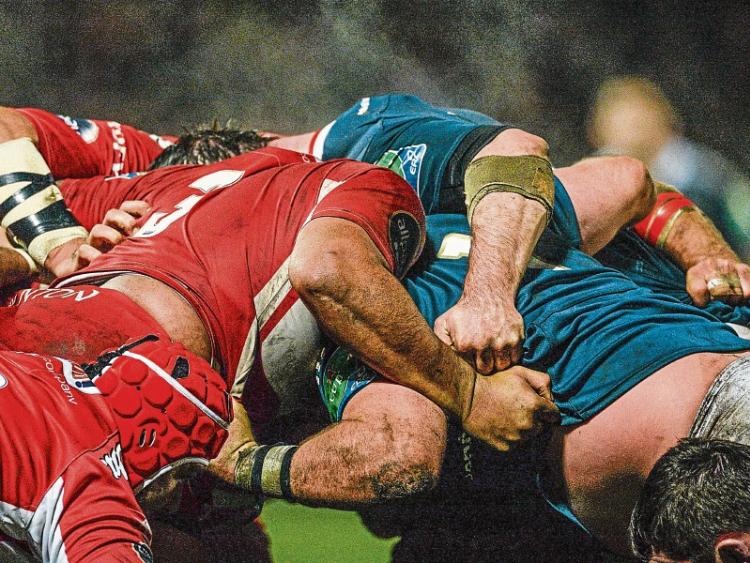 Action from Munster v Gloucester in 2014

MUNSTER will look to take a grip on Pool 2 of the Heineken Champions Cup this weekend when old foes Gloucester return to Thomond Park on Saturday,1pm.

Saturday’s clash in Limerick will be the eighth meeting overall between Munster and Gloucester in European competition, with the Irish province having won five of their previous seven clashes.

While Munster come into this weekend’s tie on the back of a hard fought 10-10 draw with Premiership high flyers Exeter on Saturday. Gloucester won their opening Champions Cup pool fixture when scoring a 19-14 victory over French champions Castres at Kingsholm.

Munster are sweating on the fitness of scrum-half Alby Mathewson ahead of the game with an on-going knee issue. In his absence last weekend, Duncan Williams slotted in at scrum-half, turning in an impressive display.

Ireland international scrum half Conor Murray will again be an absentee this weekend with an on-going neck issue.

Munster centre Sam Arnold was also due to see a  specialist this week for the throat injury he suffered during the course of Saturday’s draw with Exeter.

South African second row Gerbrandt Grobler is set to return to Munster this weekend for the first since his summer move to the ‘Cherry and Whites.’

Grobler faced plenty of controversy during his time with Munster last season, after he served a two-year doping ban between 2014 and 2016, having admitted to taking a banned anabolic steroid.

In a summer interview, Grobler said he had held discussions over extending his stay in Ireland, claiming he had been offered a three-year contract until the criticism received by the IRFU for employing him blew up.

Asked how he assessed Grobler’s season at Munster, head coach Johann van Graan said: “I think at the end of the campaign he did really well.

“He's a quality player with his ability around the lineout, you've just got to watch the way he catches a kick-off, he's brilliant at that, and his offloading ability. He's a quality rugby player and I think that's why Gloucester bought him.”

Van Graan said the Munster squad was a ‘hungry and confident’ one in the wake of their draw away to Exeter.

“I knew there was quite a bit of noise outside that we would do well to only get one point. We believed that we could win the game. We went down there with that mindset.

“This is a very hungry and confident group of players. That's what I said at the beginning of year, we are looking for an improved performance week by week and I felt that we got that over the last three weeks.

“We took a lot of confidence out of that because it is a team we respect that much. I believe they will be there right until the end (pool stages), if not the end of the competition.

“We definitely took a lot of confidence out of it but the most important thing is the confidence that we got from our performance.

There was some positivity surrounding the fitness of centre Chris Farrell who has been sidelined since suffering a cruciate ligament injury in February.

Van Graan said: “Chris Farrell is running very well. I don’t foresee him being back over the next two or three weeks. We might have an opportunity over November but then there are the Test matches as well.”