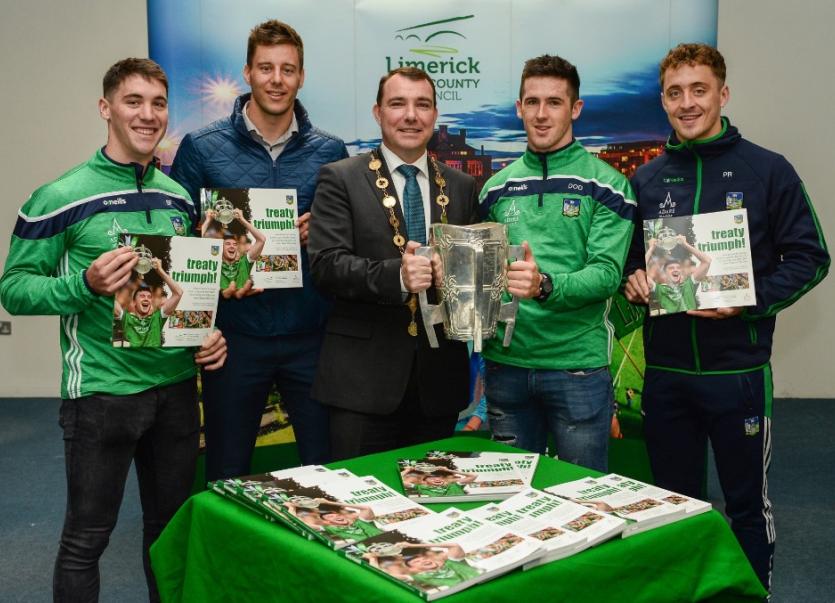 James Collins, Mayor of the City and County of Limerick, along with Limerick hurlers; Sean Finn, Dan Morrissey, Darragh O'Donovan, and Pat Ryan at the launch

There are over 250 pictures in the 168-page glossy book, with 10 different photographers.

Every game Limerick played this season is captured along with exclusive pictures from the victorious Limerick dressing room in Croke Park as Liam MacCarthy was annexed after a 45 year wait.

The new book goes into shops across Limerick this Wednesday, priced at €19.95. The book can also be purchased online.

Treaty Triumph is officially endorsed by the Limerick GAA County Board with proceeds from sales will go to the Limerick players Holiday Fund.

Each page has words by leading journalist Damian Lawlor.

“It’s fair to say that August 19th last is embedded forever as a memory in the minds of all Limerick hurling fans, indeed all Limerick sports fans. We will always remember where we were and how we felt when the final whistle went in Croke Park. However, this book will stoke that memory for a long, long time to come.  It’s a pictorial tribute that somehow does great justice, thanks to the outstanding work of Sportsfile’s photographers, to a story that takes some telling," said Mayor James Collins.

Ray McManus, founder of Sportsfile thanked the Mayor and his officials for supporting Treaty Triumph.

“I have worked with our staff over the past 21 years producing A Season of Sundays and while Treaty Triumph! is a little different, it is one of the best books we have produced. It really captures the true spirit of the game of hurling and the efforts of the Limerick squad and indeed of their massive band of supporters," said McManus.

“In our lifetimes, it will be hard to have a year, and a single moment like what we all experienced on August 19th last, that we will enjoy and remember as much as this. Having this brilliant photographic memoir to bring us back to all those great moments is a great gift and I’ve no doubt it will be one of the most sought-after stocking fillers this Christmas for Limerick folk across the world," said Limerick GAA secretary Mike O'Riordan.