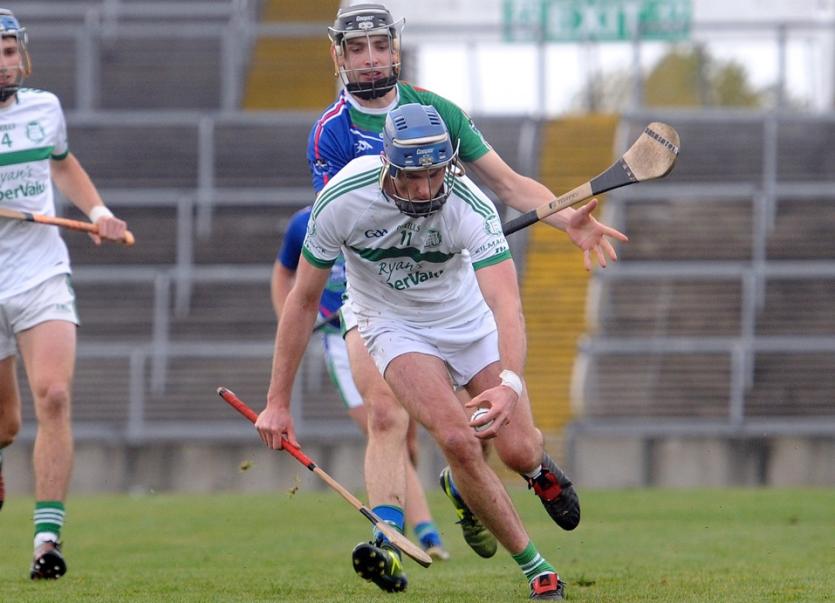 Action from Kilmallock and Murroe-Boher, this weekend the Balbec face Na Piarsaigh

And, the first adult championship silverware of the season is up for grabs in the Woodlands House Hotel Limerick Junior B Hurling Final.

The JBHC final is a repeat of the east final between Cappamore and Doon. Kilteely host the final on Saturday (3.30). They met in the group phase and final in the east championship with Cappamore winners on both occasions.

An attractive double-header in the Gaelic Grounds this Sunday – a repeat of last season's final Na Piarsaigh v Kilmallock at 3.45 and Doon v Patrickswell at 2pm.

Seventeen All Ireland SHC winners will be on show across the four teams.

Na Piarsaigh and Kilmallock have won seven of the last eight titles between them and on five of the last six championships, one or the other ended the title aspirations of their opponents.

Both should be close to full strength – Kilmallock had Micheal O’Donnell, Kevin O’Donnell and Robbie Egan all back in their plans in last Sunday’s quarter final win over Murroe-Boher. Na Piarsaigh didn’t have Mike Casey in their last game but his duel with Graeme Mulcahy could be key.

When the rivals met on September 1 in the group phase they ended level.

The curtain-raiser will see Doon attempt to end an 18 year wait to return to a county final. They will be hoping to have Darragh O’Donovan back to full fitness to face a Patrickswell side that have O’Brien brothers Thomas and Seanie back in recent weeks.

The quartet are bidding to reach the Credit Union Limerick SHC final, which is now set for Sunday October 28.

The final was to be a flood-lit fixture on Saturday evening October 27 but has now been moved to a customary Sunday fixture. Live television coverage is an option for TG4 but not confirmed to-date.

The Limerick SHC winners will be in Munster club action on November 4 with home advantage in a provincial semi final against Tipperary’s Nenagh Eire Og or Clonoulty-Rossmore.

There is a fresh look to the LIT Premier IHC semi finals – a double-header in Kilmallock this Saturday.

Mungret, Kildimo-Pallaskenry, Garryspillane and Bruff had their last four spots confirmed ahead of the final round group games.

The semi final pairings pit Mungret against Bruff at 2pm and Kildimo-Pallaskenry against Garryspillane at 3.45.

Mungret are coached by new Limerick minor hurling manager, Diarmuid Mullins. This time last year they had to beat Effin to avoid relegation but bounced back to top the 2018 league table after seven group games. Captained by Brendan Giltenane, Mungret have exciting young talent in Paul O’Brien, Rory Duff and Conor Hellewell to join others like Patrick Begley, Eoin O’Doherty and Cian O’Brien.

They face a Bruff side that are of course without the injured Paul Browne.

The ‘Bouncers’ were beaten after a replay in last year’s final by Murroe-Boher. The TJ Ryan managed side have over two decades of experience in his brothers David and Donie. Fresh emerging talent is in the shape of Dylan O’Shea, Ryan Tobin, Eoin Sheehan and Mark Quinlan.

Inter-county footballers Peter Nash and Tony McCarthy are also in their ranks, along with young guns Darren O’Connell and Liam Griffin. They are managed by Bruree native Chris Sexton with Patrickswell’s Damien Gillane as coach.

When the sides met in April, Kildimo-Pallaskenry were 1-18 to 0-17 winners.

The final is set for the weekend of October 20/21 with the new champions out in the Munster club IHC the following weekend with a quarter final away to Waterford's Clonea or Clashmore Kinsalebeg.

Three of the semi-finalists are the same as last year with Croom the newcomers.