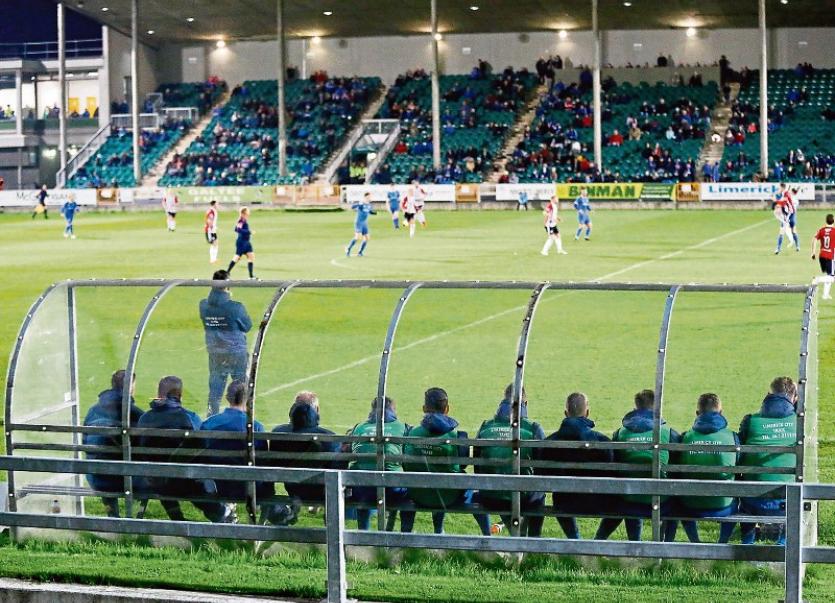 A sparsely populated Markets Field on Friday night as Limerick lost out to Derry City. The ‘Blues’ will be hoping for a larger crowd on November 2 in their relegation playoff

Tommy Barrett’s Limerick FC side suffered a frustrating 1-0 defeat to Derry City at the Markets Field on Friday night before a disappointing attendance.

A combination of that result and Bray Wanderers’ defeat at Sligo on Saturday means Limerick are assured of a ninth-placed finish in the Premier Division and as a result, a relegation play-off against First Division opposition.

Eighth-placed Sligo’s win on Saturday ended Limerick’s outside hopes of pulling clear of the relegation zone altogether over the remainder of the regular season.

The ‘Blues’ opponents for the play-off game will be either Finn Harps or Drogheda Utd, who squeezed past Shelbourne on penalties in their play-off second leg at Tolka Park on Monday night.

In the meantime, Limerick FC are preparing for a trip to Turners Cross to face Premier Division runners-up Cork City this Friday, 7.45pm.

Limerick FC manager Tommy Barrett is confident club chairman Pat O’Sullivan is doing his utmost to ensure the club is not wound up at the end of the month.

Reports in recent days suggest Limerick FC is facing a winding up order. It has been reported that Revenue’s petition will be heard on October 22 in the High Court.

Barrett said: Is it worrying? I dunno, it is a difficult one to call. I’m sure (Limerick FC Chairman) Pat (O’Sullivan) is trying his best to sort it.

“He has been looking for investment all year and if anyone can sort it out, I think he will.

“The last thing he will want to do is leave the club go to any bad terms. He is trying his best to keep the wolves from the door and I’m sure he will sort it out.

“Obviously it would be terrible if the club is wound up. There is nothing we can do about that. All we can do is look at results on the pitch and try and stay in the league.

“We will continue to try and do that. That is for the powers to be to decide.”

Limerick FC will hope that a larger crowd turns out to cheer them on for the second leg of their relegation play-off on November 2. The attendance for Derry on Friday night at the Markets Field was one of the poorest this season.

Barrett said: “It makes a big difference to have the support. When this place (Markets Field) is rocking it’s really good. It helps.

“But look, we have to do it on the pitch as well. No matter what they say, most people in any part of the world in any country want success and they want to be winning. Unfortunately we are in a transition period where we are a young team.

“I think we play a good brand of football. Since the pitch got better we are really good, a really good football team but we are lacking in certain areas and lacking experience as well to see out games, win games, score goals and finish off teams.

“I would urge everyone to come in and support us. There is some very good local talent there.”

A goal on 23 minutes from Derry City’s Republic of Ireland U-21 international Ronan Hale helped Derry end a five-game losing run in the Premier Division as he fired the Candystripes to their 1-0 win at the Markets Field on Friday night.

Limerick have managed to win just three times at home this season, scoring just 10 goals in 17 league outings in Garryowen.

Barrett said: “In the second half, in particular, we were very good. For the goal, Darren (Murphy) jumps in around the middle of the park and it opens up. It was a really good finish as well.

“Derry have got really good players and that’s the league we are in. We probably don’t have a cutting edge. It’s difficult, but I still think that we are doing ok.

“We have 15 or 16 players under the age of 22 and 23. We lost a lot of players in June, all our senior pro’s. Then we have another couple of senior pro’s out injured long term. It’s difficult.

“Obviously you are disappointed when you are losing. I thought we played very well in the second half. We owned the ball.

“It’s a bit easier when you are 1-0 down but we only started playing when we went behind. The boys were a bit nervous and edgy but you got to be right from the start.

“Again, in the final third we are lacking and we have been lacking all year, but we haven’t got the finances the likes of Derry have.

“They can bring in players from England and further afield. That’s where we are at. I feel we are doing as well as we possibly can do.”

Limerick’s starting XI for that Derry City game did not include an established striker.

Manager Barrett was without striker Connor Ellis for the league game as has been struck down with a bug in the lead up to the game.

The absence of Ellis was one of only two changes in the Blues side from that which beat relegated Bray two weeks earlier with Will Fitzgerald occupying his number nine berth. Colman Kennedy replaced Killian Brouder in the other switch.

Limerick lost all four of their Premier Division meetings with Derry City this season.

These sides had met 15 times in the league since Limerick’s promotion to the Premier Division in 2013, with Derry managing to outscore the Blues by 33 goals to six in that spell.