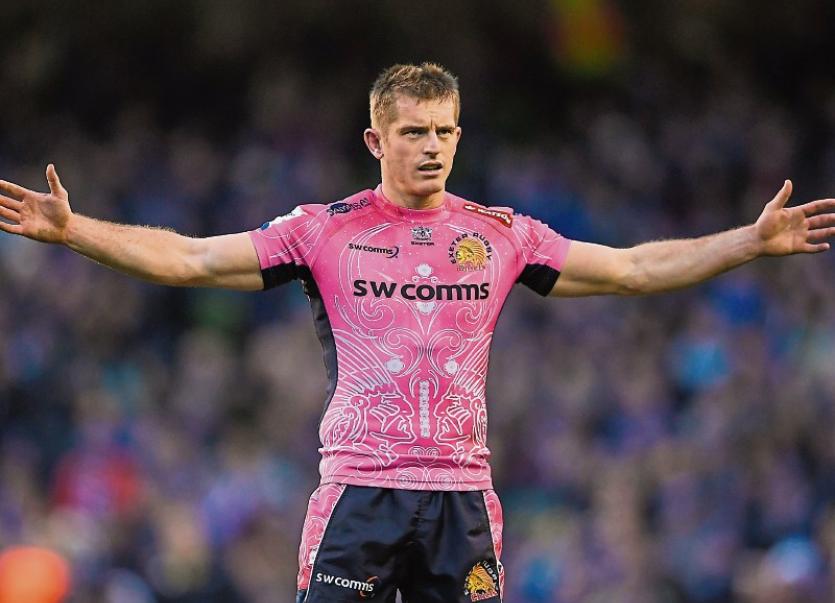 MUNSTER kick-off their quest to qualify for the quarter-finals of the Heineken Champions Cup for a record 18th time when travelling to Sandy Park to face high-flying Exeter Chiefs this Saturday, 3.15pm.

The Chiefs sit on top of the Gallagher Premiership at present, winning all six of their league fixtures to date.

Munster, who have an injury doubt over their influential All-Black scrum-half Alby Mathewson, are facing Exeter for the first time in European competition this Saturday.

The Chiefs recorded an impressive 12-0 win when the sides met in a pre-season friendly at Musgrave Park in August.

The settled Chiefs squad is captained by Don Armand, the dynamic ball-carrying back-rower.

Exeter were bolstered this summer by the signing of Wales winger Alex Cuthbert who joined from the Cardiff Blues at the end of the season on a three-year deal.

Versatile England international Henry Slade has been a key member in the Exeter side for a number of years, while prop Tomas Francis and hooker Luke Cowan-Dickie are important members of Exeter’s powerful pack.

Asked what he believed Exeter’s strengths are, Van Graan said: “They have strengths all over the field, they’ve got a pretty good ‘D’ (defence), I thought in our second half performance against them in the pre-season we attacked pretty well.

“We changed it up a bit at half time and changed one or two things. They don’t give you line-out, they don’t really kick the ball out especially with that wind.

“One of their strong points is that they know exactly how to play on that field and not a lot of teams go and actually win.

“In terms of the way they kick I’ve spoken a lot about their attack, but their kicking game they pin you in your ‘22 and wait for you to make a mistake and they keep the ball until you either concede a penalty or concede a try, that’s what they are good at.

“Obviously we’ve got a certain strength that we showed over the weekend that we want to use and certain parts of our game are ever evolving.

“It’s a fascinating tussle like all the games will be in this Heineken Champions Cup and it’s a team that we respect a lot, we’ve got an away fixture and a home fixture against them; the first one and the last one.

“I’ve been here one year now and with the Champions Cup who knows what might happen at that last pool game but it’s great to be part of it.”

While Van Graan admitted the Munster players and coaches were very disappointed by Saturday’s defeat to arch rivals Leinster in Dublin, he said everyone was looking forward to Saturday’s European Cup opener.

“We were very disappointed on Saturday. Like I said, we went there to win and I thought we put ourselves in good positions to win, unfortunately, our discipline let us down at crucial stages.

“This week it's Europe, it's a good competition that Munster love a lot and we can't wait to get going.”