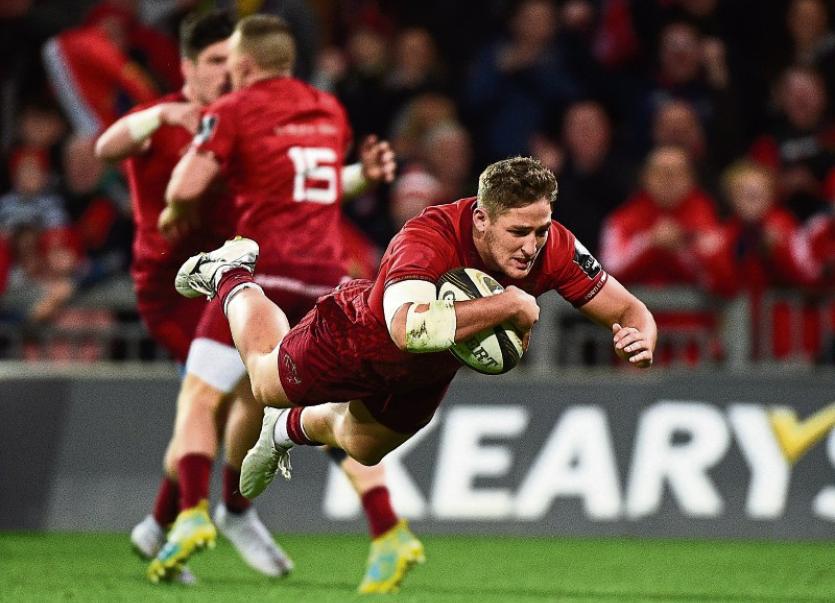 Twenty three-year-old Limerick man Goggin turned in a powerhouse display in Munster’s midfield in the PRO14 derby clash at the Aviva Stadium.

Young Munster clubman Goggin has made four starts for Munster in the PRO14 this season, helping himself to a brace of tries against Ulster.

Head coach Johann van Graan said: “When I arrived here last year, obviously you don’t know all the players, especially the guys that were injured and Dab was injured when I arrived.

“I watched some footage and there was one clip I remembered against Connacht at home two years back and he made a read that led to a try. I saw there was something about this guy.

“He came back last year and scored that tremendous try against the Kings and played the next weekend. He was kind of on the brink all the time and he’s just really attacked this pre-season.

“I thought he played really well in the pre-season games and he built into the season and I believe he’s ready for a massive step up.

“His basics are solid, he’s running is so hard and is getting us over the gainline. He’s a very good distributor of the ball, his defence is solid, he steals at the breakdown and he’s worked so much on his decision-making and communication skills.

“That’s what you want to see from a player. Another Munster homegrown player that’s developed and hopefully now he can take it to the next level.”

Earls said: “He has been brilliant, he works hard, he is a big physical man. He has been given an exposure to 7s and his passing game has come on massively because of 7s and he is taking his chances.

“It is great for him and for us, to have another Limerick man coming through.”