Tactics Board: How Limerick FC need to set up for the play offs 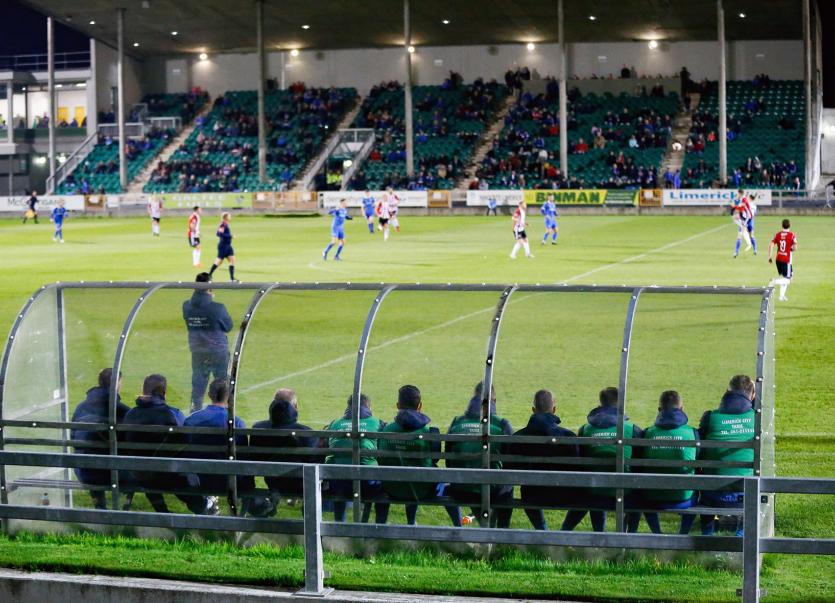 Tactics Board: Tommy Barrett must pick his best eleven and formation for the upcoming promotion/relegation play-off games

ON the back of a very disappointing 1-0 home defeat to Derry City last weekend, Tommy Barrett’s main focus must now turn to picking his best eleven and formation for the massively important upcoming promotion/relegation play-off games.

With three Airtricity league games to go before a two legged scenario that could have huge ramifications for senior soccer in Limerick and indeed the region, Friday's team selection against Derry City will have done little for the young boss in terms of learning anything new about his players going into the most important phase of his managerial career.

Without Premier division status, the future would look even bleaker than it does at the minute for the Super Blues. According to recent reports, Limerick FC could be facing a wind up order, leading to another tough period off the pitch for the famous club.

The only areas of operations the manager can control though, is team selection and organisation. Therefore after the Derry game, he could be pondering both.

Derry, in second gear throughout, were happy to play counter attack football and fashioned their best chances on transition from defence to attack, one such foray produced the only goal of the game by Ronan Hale on 23 minutes.

Limerick, playing without a recognised striker, opted for top scorer Barry Maguire as the focal point in attack but by half time looked like they were missing the former Dutch International's guile from his most effective attacking midfield position and also a striker to run in behind the Candy striped defence.

Young Adam Foley, top scorer for the U-19s over the last two seasons was again an unused sub and must, like a lot of us in the press box be wondering why he wasn’t given at least a cameo role.

The manager opted to bring Danny Morrissey off the bench in the 83rd minute, which again raised an eyebrow or two in the scarcely populated North Stand of the Markets Field stadium.

Morrissey is an undoubted talent, but fans presumed he was injured when not named in the starting 11. The fact he appeared with ten minutes to go would suggest he isn’t injured and raises the question, why not start him in the attempt to get minutes into he’s legs for the play offs and give young Foley the remainder of the game with Maguire in his natural position?

The midfield unit is probably the only unit that has all its options fit and available right now. Captain Shane Duggan will lead the side in the two play-off games alongside Maguire. So it’s really a case of either Murphy or Coleman joining them in the central area.

I do think Coleman and Murphy could both feature in starting berths with Murphy providing the disciplined holding role and Coleman on the right side, especially in the away leg of the upcoming season finale.

Billy Dennehy who made a substitute appearance, can provide experience and a goal threat at wide left. If fit, Morrissey would certainly lead the attack, but this is something that he has been unable to do regularly all season, so Conor Ellis will most definitely play once recovered from his illness.

I think Tommy Holland is in pole position for the number one jersey and has been impressive of late and he will need the experience of Shaun Kelly and Shane Tracey in the full back positions. Whichever two are selected from Coleman, Kennedy, Cantwell, Wearen and Brouder, will be tasked with protecting the heart of a side. That should allow Barrett to call on the pace and attacking threats of both Will Fitzgerald and Karl O’Sullivan.

O'Sullivan, in my opinion, needs to be used shrewdly and at the correct times in games of huge significance like those ahead.

While both young players have huge potential and no doubt a future at this level, goals and assists are still not part of either young players artillery just yet. This is not a criticism of these two fantastic talents but an honest assessment of where both are at in their first full season at this level. Springing either or both from the a bench could just be the injection of life the play offs might need.

Barrett will I’m sure, use the remaining games to build the belief that the 'Blues' can stay in this division but a massive improvement on the Derry game will be needed to convince the supporters and Limerick footballing public that survival is possible.