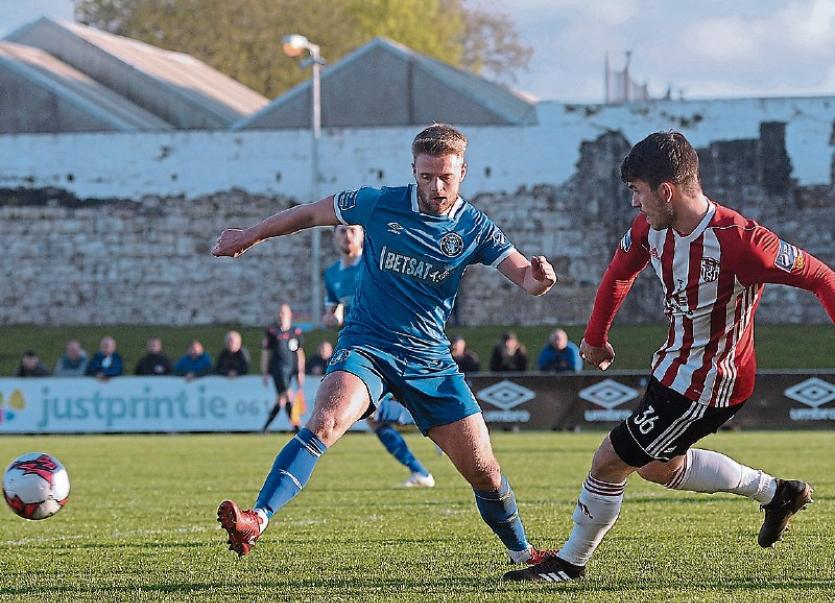 Conor Clifford, Limerick FC, in action against Jack Doyle, Derry City when the sides last met at the Markets Field in April of this year Picture: Gareth Williams

LIMERICK FC can wrap up the relegation play-off position in the SSE Airtricity League Premier Division by securing a draw with Derry City in their Markets Field this Friday, 7.45pm.

And Limerick FC’s goal difference is 25 superior to that of Bray.

Tommy Barrett’s Limerick FC also have an outside shot at pulling themselves clear of the drop zone completely, but to do so the ‘Blues’ would need to make up an eight-point deficit on Sligo Rovers,

And the ‘Bit Of Red’s’ goal difference is 29 superior to that of Limerick FC.

It was also confirmed in recent days that should, as seems likely, Limerick end up in the relegation play-offs, the ‘Blues’ will be at home for the second leg.

The FAI confirmed that side finishing 9th in the Premier Division will be on the road for the first leg of the relegation play-off against a First Division side on Bank Holiday Monday, October 29.

The second leg would take place the Markets Field on Friday,  November 2 if Limerick are involved.

In the First Division play-off series, Shelbourne will face Drogheda United over two legs beginning this Friday, with the winners taking on Finn Harps.

The winner of that tie will face Tommy Barrett’s Limerick to decide which club competes in the Premier Division in 2019.

Limerick secured a 2-0 victory away to Bray Wanderers in their most recent outing at the Carlisle Grounds.

The Shannonsiders claimed victory in all four of their Premier Division fixtures with Bray this season.

The ‘Blues’ go into Friday night’s clash with Derry City on the back of a ‘free’ weekend as the FAI Cup semi-finals took centre stage.

Derry City suffered a 3-2 defeat to champions elect Dundalk at Oriel Park in their most recent league outing.

Derry sit in seventh place in the table, 12 points clear of Limerick.

Limerick have lost all three Premier Division meetings with Derry this season. The Candystripes have scored 5-0, 3-0 and 2-1 wins to date.

The 2-0 success was just Limerick’s fourth away success in the Premier Division this season. Mind you, Limerick have only managed to win just three times at home in the league this term.

Limerick have held something of an ‘Indian sign’ over the Seagulls in recent history as Bray’s last win over their Munster counterparts came all the way back in 2015.

Bray have been in the Premier Division for 14 successive seasons.

Limerick’s success over Bray ended a run of four successive defeats in the Premier Division in which Barrett’s side have conceded 14 goals and scored just once.

A gritty Limerick side took a deserved 18th-minute lead at the Carlisle Grounds with Ellis and Cian Coleman combining to allow ‘Blues’ skipper Shane Duggan centre for Maguire to tap-in from close range.

Limerick wrapped up the points two minutes before half-time when Karl O’Sullivan beat two defenders before crossing for Ellis to score.

Limerick’s two-goal return against Bray brought their tally of league goals on the road to 14, four more than the Blues have managed at the Markets Field.