'Time to take advantage of what we have got' - Martin Kiely 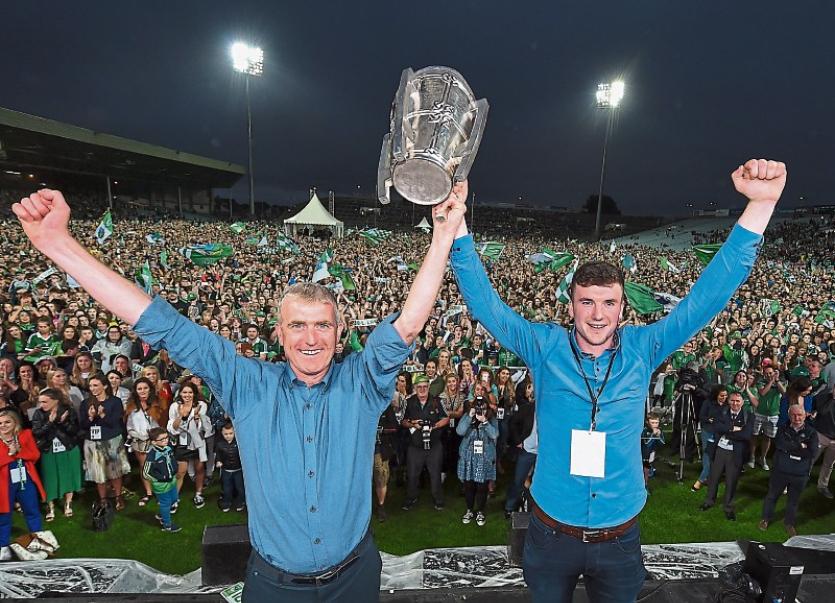 John Kiely has a habit of sending out the right message. He did so again last week in this paper in his interview with Aine Fitzgerald.

It was clear that both he and the team are back on message and that the time for celebration is coming to an end.

Some people might be of the view the players and management should be at the beck and call of clubs, schools and just about everyone else, but the time for focus has come.

In his interview John Kiely set the tone but still let it be known that the Liam MacCarthy Cup is still very much on tour.

All too often in the past Limerick have left themselves down in celebration and we have some fair form over the years. Thankfully we now have a management team and players that have bigger things in mind. They know the window will only be open for a short time and all they have to do is look around at other counties and see where it all went wrong. The lap of honour has destroyed many teams and it’s good to see John Kiely and his management team have an early grip and in doing so bring matters back to ground level again.

Limerick will have major challenges ahead for next year and we all know that other counties have already started getting their management and team in place.

Liam Sheedy returned to the sideline last week and be assured that he will bring a freshness to Tipperary in 2019.

Waterford have appointed Padraic Fanning and he too will know that he has little time to get his house in order in Waterford.

The desire to win brings great hunger but it’s a bit more challenging when you are a winner. Limerick have won a lot of respect this year but they will know that when they cross the line in 2019 everyone will want a serious crack off of them. Returning to focus is something this Limerick team will do and I am delighted to see that they have reined in celebrations and they are now starting to focus on next year.

The biggest plus Limerick have is that they have a player base with the average age of twenty three.

They have players that have done really well but many of these players have so much more to give. They have crossed the line, they have won much of what is available to them but they can add more to it.

To win again you have to possess a huge desire, a huge hunger to get more out of yourself. One of Limericks biggest assets this year was how the team worked for each other. They just out worked and outran every team. To repeat that will take a massive effort but I feel this group will not be happy with one All Ireland medal in their pocket.

A few weeks ago I sat down with John Kiely and we touched on some of these topics and at the time he mentioned Boston and Fenway hurling challenge. The exhibition game is very much promoted by the GPA and I believe it has no place in the hurling calendar. This is a sideshow to raise money and nothing else and it has no place in the GAA fixture list. John Kiely might never say it but deep down I am sure he and his players would be quite happy not to go.

Both the management and players have lives outside of hurling, they have jobs to keep and I am sure many employers will have been more than generous in allowing time for players during games and training.

This event might be the perfect for the GPA but it’s not the ideal for players and management. In the new fixture format this sideshow should have been discarded. John Kiely said he is going there to win and I am sure they will do that. He will want to keep the winning effect going regardless of the competition.

The team also will go on the team holiday after Christmas and that requires a lot of organisation from many sides. The players and management will rightly look forward to it but they might want to be mindful of what happened Galway this year.

They were four to six weeks behind all other teams when they came back and they never recovered. Paul Kinnerk and Joe O’Connor will have experienced this in the past and they will know the challenge it poses.

How much work can they get in before the holiday? John Kiely told me he knew in the early days after last Christmas that the players were in great shape both in body and mind. Winning does not make things easy, in fact it brings more challenges.

One of really important areas after winning is to keep the management team together. Now, John Kiely and Paul Kinnerk are going nowhere. Joe O’Connor has given good service to Limerick and might be tempted to move on. He has an association with Kerry and if a new manager is appointed would he consider moving on?

His Limerick connection is a strong thread but from his point of view it’s work and business but I think he will stay with Limerick for another year. In recent weeks there was some speculation that there might be a change to some elements of the management team.

The risk of that happening has receded somewhat and all looks to be in order going into 2019. The biggest task facing Limerick is holding on to sports psychologist Caroline Currid. She has such an impressive record.

Victories with Tyrone, Dublin, Tipperary and now Limerick. I understand ten different counties have expressed an interest in her services. She is not known for staying around too long and of all the people involved she is the one that might consider a new challenge, but I expect her to stay with Limerick one more year.

Limerick County Board had meetings in America some weeks ago and the plan is to have some corporate dinners in at least three of the major cities.

They are also considering the same in the England. They have an opportunity to wave the flag as some Limerick people have done really well and they have the potential to fill rooms on both sides of the Atlantic.

My understanding is that those meetings went well and now it’s about making it happen. Opportunities such as now come around very little and the time is right to network and build relationships that will be available in the future.

Limerick have received €80,000 from Croke Park towards the team holiday and other fund raising efforts have gone really well.

The team photograph was taken in Adare Manor a few weeks ago and that can be expected to also raise a lot of money.

Limerick County Board have had major expenditure in 2018 but they also have enjoyed greater returns from games at the Gaelic Grounds and other revenue sources this year. The corporate dinners prior to the All Ireland were a sell out and I hear there will be another major fundraising dinner in November. All of that points to a better looking set of accounts for convention in 2018.

Next week is the closing date for nominations for convention and it will be interesting to see if we have changes at the top table. I wouldn’t be surprised to see at least one major position challenged.