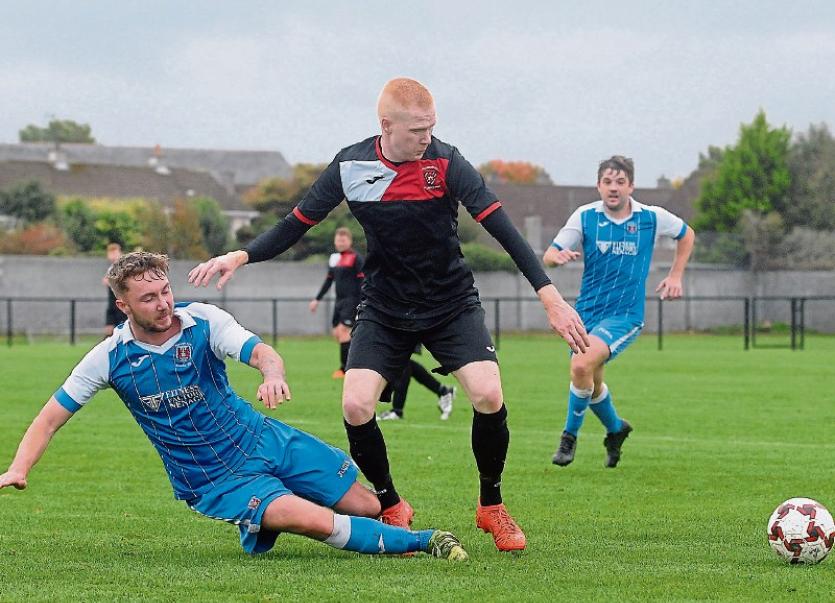 At the start of the season few people were looking beyond Janesboro and Pike Rvs as true contenders for the Premier League title but Ballynanty Rvs are determined to upset the odds.

After eight games the Blues maintain a 100% record, their latest on Sunday was an 8-0 win over a struggling Carew Park XI.

With upcoming games against Pike and Janesboro on the cards we could be in for some cracking ties.

On Sunday Arron Nunan put ‘Balla’ on their way and further quick fire goals from Dermot Fitzgerald and Mike Guerin killed off the tie.

The same trio went on to each claim a second goal with Kevin Nolan and Eddie Byrnes making up the tally.

Credit is due to Carew Park who got the players out to fill the fixture. It cannot be easy but they are determined to see out the season and use the close season to rebuild the side.

Second placed Pike Rvs turned in a frightening display away to Kilmallock overrunning the home side with a 12 goal salvo.

Colin Daly was the tormentor in chief with a four goal haul. Jonathan Grant claimed a hat trick and Eoin Hanrahan scored twice. Darragh Rainsford, Steve McGann and Shane Walsh made up Pike’s total. Barry Sheedy scored a late consolation for the home side.

Champions Janesboro maintained their two point gap on the leaders with a 1-0 win over Nenagh.

The home side did not have things their own way against a determined Nenagh XI finding the back line a tough nut to crack.

As it transpired it took a penalty kick midway through the second half to break the deadlock and Shane Clarke does what he does best by blasting the kick past Aaron Savage to secure the points.

Aisling scored another win and in the process heaped more woe on Charleville, winning 4-0 in Annacotty on Saturday evening.

Evan O'Connor was the hero for Aisling scoring a well taken hat trick.

O'Connor proved too hot to handle for the Cork lads and he opened the scoring when he met James Cleary’s corner at the front post to guide the ball home.

It was 2-0 with a repeat of the opener, this time O’Connor finished at the back post.

O'Connor turned provider to put Aaron Murphy through for the third and before the end the Aisling front man completed his hat trick when he was in the right place to tuck the ball home after James Cleary’s effort rebounded to him.

The home side dominated possession early on but the closest they got to a goal was when Kieran O’Connell headed over from close range.

At the other end Dean Glasheen saw his free kick whiz inches past the Regional goal.

The deadlock was broken ten minutes from the break when Sean McSweeney threaded a ball through for Sosuke Kimura to claim his eighth goal in five games.

Derek Hanlon forced a good save from Rob Shier before the break.

Regional got the crucial second goal when Kieran O’Connell was denied by Glasheen and from the resultant corner McSweeney’s delivery was headed powerfully home by Clyde O’Connell.

Prospect pulled one back through Ian Clancy but it was too late to affect the result.

The Division 1B side are motoring well in their own Division but found the ‘Dines’ a step up again from what they are used to.

The visitors took the lead on 19 minutes when Christy O’Neill and Cian Byrnes combined for the latter to put Ian O’Donoghue through to score.

The lead was doubled just before the break when a push on O’Donoghue was punished when the striker dusted himself down to convert the resultant spot kick.

High flying Hyde Rgs were brought back to heel on Sunday when they were forced to dig deep to see off the challenge of Division 4 side Shelbourne B.

Mark Whelan scored the only goal of the game but Adrian Shine will be instilling in the side that they need a big improvement for their reward of a clash with Athlunkard Villa next Sunday.

Corbally were also made to work for their win at Cats Cradle.

Despite their lowly position, Glenview opened scoring with a great 25 yard shot from Shane Brosnahan to the top corner.

Bobby O’Mara equalised just before the break but the home side regained the lead courtesy of Sean Keane after a good counter attack.

Corbally battled back well and Glen Mitchell leveled the tie before Darren Hanley popped up with the winner.

Caherdavin advanced in the Munster Junior Cup with a win over Parkville at the Greenhills.

Wembley get the chance to test their progress against premier side Regional as a result of their success on Sunday.

They defeated Athlunkard Villa C 2-0 in UL. Kieran Naughton and Eric Johnson netted for the winners.

In the FAI Youth Cup, Fairview were forced to extra time before seeing off Division 3 side Lisnagry.

Kilfrush beat Mungret 6-4 thanks to goals from Josh Carroll, Killian Reale and four from Tyrique McNamara.

The top game in Division 1A ended all square when Coonagh Utd and Mungret Reg played out a 1-1 draw. Mark McGrath scored for the home side. Mark Purcell replied.

Athlunkard Villa were unable to take advantage as they fell 4-2 at Holycross. Tony Burke, Gary McInerney, Simon Delaney an own goal accounted for the winning scores. Ray Kerley and Christian Kerley scored for Villa.

Moyross moved right back into contention with a good 2-1 win at Cappamore. Joey Shanahan scored for Cappamore but goals from Barry Quinn and Anthony McInerney gave Moyross the spoils.

Goals from Adam O'Regan (2), Conor Madden and Kieran Long gave Fairview the points at Castle Rvs for whom Ronan Sherlock replied and a David Bradley goal gave Summerville the points at Aisling.

In Division 1B Newport are the new leaders following an impressive win over Geraldines B. Goals from Brian O'Sullivan (2), Christy Connors, Nathan Hartigan, Elliot Slattery and James Lynch saw the Tipperary lads win with a bit to spare.

Eamon O'Mahoney and Ciaran Kelly were on the mark for Ballylanders but they went down by the odd goal to Regional Utd and goals from Gerry Fitzpatrick (2) and Jeff Mannion.

Star Rvs took over top spot in Division 2A thanks to a 6-3 win over Caledonians. Brian Purcell (2), Martin Lyons (2), Cian O'Donoghue and Stuart O'Keeffe made up the winning tally with Jack Cross (2) and Nathan Kirrane scoring for Cals.

Charleville fell at home to Kennedy Park for whom Calvin Moran and Alan Keane were on the mark.

In Division 2B Pallasgreen won at Athlunkard Villa B thanks to goals from Vinnie Ryan and Adam Keogh while Mungret won 5-2 at Newport. Nathan Hartigan scored twice for Newport but goals from Jackub Ciecloch, David Nyari, Shane Conway, Paddy Moloney and Conor O'Leary gave Mungret the spoils.

Kilmallock B keep top spot in Division 3B following a 2-0 win over Meanus. Conor Barry and Thomas Bowyers were the scorers.

In Division 3B leaders Herbertstown beat Northside 3-1. Jeff O'Donnell scored for the visitors.

For more junior soccer see www.limerickleader.ie or use #LLSport on social media.