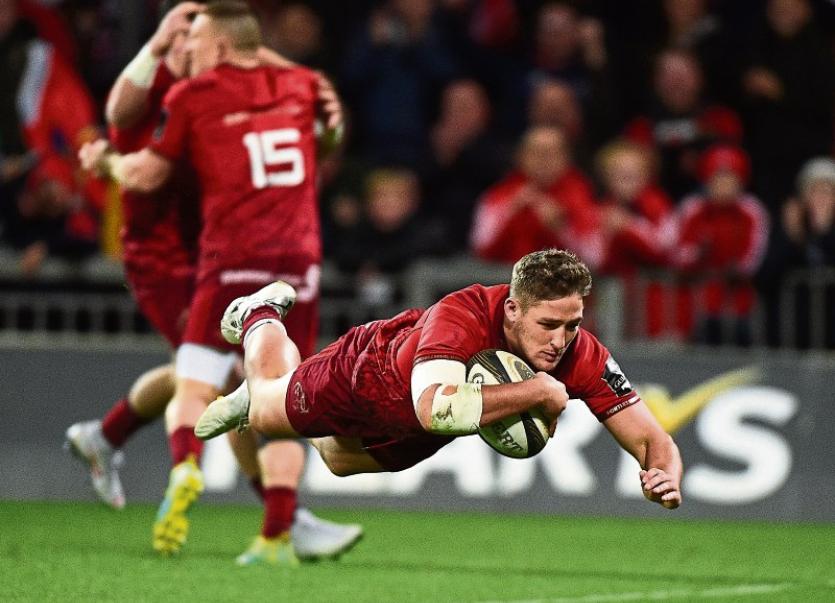 RAMPANT Munster put Ulster to the sword in recording a 64-7 thumping over their hapless interprovincial rivals in the Guinness PRO14 before an official attendance of 13,907 at Thomond Park on Saturday night.

Munster ran in nine tries in all in an impressive response to their poor showing in Cardiff eight days later. However, the meek nature of Ulster’s challenge means questions remain over Munster ahead of next Saturday’s mammoth interprovincial clash with Leinster at the Aviva Stadium.

Munster have not recorded three runaway victories at home in the PRO14, but followed the two previous home wins by heavy defeats on the road.

Out-half Joey Carbery turned in another Man of the Match display, scoring a terrific second half try, the pick of the home side’s five-pointers.

The result was a change of luck for Munster in interpro fixtures as the side had lost six of their seven fixtures against Irish provinces last season.

This was a record defeat for the visitors who trailed 29-0 at half-time as Munster had a bonus point in the bag through two tries apiece from centre Dan Goggin and Tommy O’Donnell.

Munster added five tries after the break through the excellent Peter O’Mahony, athat stunning effort form Carbery, Sam Arnold, Keith Earls and Alex Wootton to ensure the home side got back to winning ways in some style.

Munster’s debutant All-Black scrum half Alby Mathewson turned in an eye-catching display before being replaced in the second half.

Watch all the action from Thomond Park as @Munsterrugby bounced back from a disappointing defeat last week with a superb attacking display. #GuinnessPRO14 #MUNvULS pic.twitter.com/yYElkS7sKA

Ireland head coach Joe Schmidt and kicking coach Richie Murphy were among those in attendance for the interprovincial fixture.