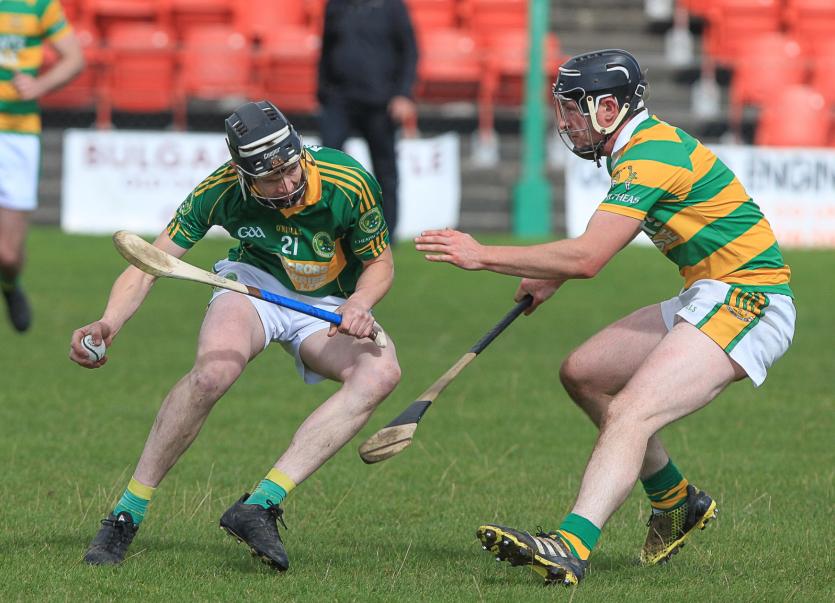 Action from today's meeting between Cappamore and South Liberties

The quarter final pairings and two outright semi finalists, in the Credit Union Senior hurling championship have been confirmed.

Champions Na Piarsaigh are joined in the semi final stage by Doon who had a surprise win over favourites Kilmallock at the Gaelic Grounds, while a 3-17 apiece draw between Adare and Ballybrown sees the Clarina side relegated to Group 2 of the Senior championship for next season.

Doon's big result now means that Group 1 sides Patrickswell and Kilmallock advance to the quarter finals where they will meet the sides to come through from Group 2 which were South Liberites and Murroe Boher. In the same group Cappamore's loss to South Liberties means that the county side have been relegated to the Premier Intermediate level for next season.

Through to semi-finals: Na Piarsaigh, Doon.

NA PIARSAIGH cemented their spot on top of group 1 of the Credit Union sponsored SHC with a 10 point win over Patrickswell in the Gaelic Grounds this afternoon.

Shane Dowling, Peter Casey and the Dempsey brothers were in fine scoring form as Paul Beary’s side end the round robin phase unbeaten.

On a disappointing day for the Well, Aaron Gillane hit a late goal but it was much too little too late.

In part two of the Gaelic Grounds double header, Doon secured a semi final spot that few expected as they scored an impressive 0-17 to 0-10 win over Kilmallock.

Barry Murphy top scored with 0-9 for the winners.

Level at 0-4 each mid-way through the half Doon finished the opening period strong with scores from Murphy, Pat Ryan and Dean Coleman as the men from the east led 0-8 to 0-5 at the interval.

Through Dean Coleman (2) and Limerick senior footballer Josh Ryan, Doon scored three of the first four points of the second half to go 0-11 to 0-6 ahead.

This woke up the men in green as they four on the bounce, captain Paudie O’Brien scoring two of those.

But they couldn’t draw parity as Coleman, Murphy and Pat Ryan gave Doon a five point lead with the final whistle approaching.

Kilmallock had no answer and when Josh Ryan scored from distance in injury time, it sealed a famous win for Doon.

Earlier in the day, Ballybrown fell out of the Super Six as they could only manage a draw in a six goal thriller with Adare.

In Cluaghaun, it finished 3-17 apiece.

First half goals from Bryan Griffin, Mikey Kiely, and Ross Griffin gave Ballybrown a 3-8 to 2-8 lead at the break.

For Adare, they had a super goal from Shane O’Connor and a penalty from John Fitzgibbon in first half stoppage time raising green flags for the west division club.

The sides shared the first eight points of the second half before Charlie McCarthy got a goal to bring Adare level.

Adare, who had 0-12 from Willie Griffin, pushed on to lead by three late on before Ballybrown rallied in injury time. However, needing to win to stay in group 1, they could only manage a draw as they drop to group 2 and Adare survive what was a disappointing campaign for them.

Backed by breeze Liberties raced into 1-2 to 0-0 lead after 7 minutes with goal from Shane Garry in 7th minute.
Cappamore hit back with goal from Bill Creamer in 12th minute to trail 1-3 to 1-2 after 14 minutes.
Liberties lead was four points at the break as Barry Nash, both play, and Brian Ryan, 2 frees, knocked over scores.

Two Brian Ryan pointed frees had Liberties 1-11 to 1-5 ahead after 37 mins. However, Liberties only scored one point in closing 23 minutes, from Brian Ryan on 51 mins. Backed by breeze, Cappamore scored 6 points, via Joe Lonergan, Conor Sheehan, his third from play and four from Tommy O'Donoghue all placed balls. A 58th minute free from O'Donoghue reduced 'Souths' lead to a single point, 1-12 to 1-11. However, Cappamore couldn't get on terms, in the closing minutes, missing a couple of good chances to draw level in nail-biting closing few minutes. While Liberties look forward to quarter-finals, Cappamore are relegated to county premier intermediate championship for 2019.

BOTH these sides would have been some punter's tip to gain a quarter final spot when the new look championship was redrawn this season. However, both teams entered this final round clash hoping for those above them to slip up, more so than having their own destiny in their hands.
Played in front of a decent crowd in a bitterly cold Cappamore, Ahane started the brighter with Tom Morrissey penalising Monaleen's indiscipline to put his side 0-3 to 0-1 ahead after six minutes.
Indeed those opening minutes were to be a sign of things to come as Ahane lived off of frees from the All Ireland winner, whilst Monaleen seemed to spread their scores around their starting fifteen more than the men from the east. Morrissey was to score eight of Ahane's ten points in the opening half.
Playing with a stiff breeze Ahane did little to make it count in the opening 30.
Indeed the wind helped Monaleen get the only goal of the game as a long ball from Mark O'Dwyer dropped into the hand of Conor Nicholas who did not need a second invitation to rattle the net. That left the score 1-7 to 0-10 at the break.
Monaleen's supplier of the gaol, O'Dwyer, was to be their go to man for the second half also. County stars Lorcan Lyons and Andrew La Touche Cosgrave played their parts too. Lyons scored three points from play, operating at midfield, while La Touche Cosgrave sent over a free from well inside his own half.
The winning score, in what was a tame end to the game, came from Monaleen's David Moloney.

It didn’t matter in the end. Results elsewhere saw Murroe-Boher advancing to the county senior hurling quarter-finals but missing out on qualifying for 2019’s Super Six qualifying group and Knockainey avoiding relegation to premier intermediate.
But there was everything to play for when the sides lined out for Sunday’s final qualifying round clash in Bruff. Even though the losers put in a spirited late recovery, there was too much ground to make up after they were battered by Boher’s explosive start and found themselves trailing by twelve points after just twelve minutes.
Indeed, it could have been even more had the winners not shot eight wides before Knockainey were given a chance to find their feet. When they turned it on, the Murroe side played with speed and intensity and used the finishing of Seanie Tobin and Mikey Ryan to rip opposing defence apart.