Limerick senior and intermediate club hurling line-ups to be finalised 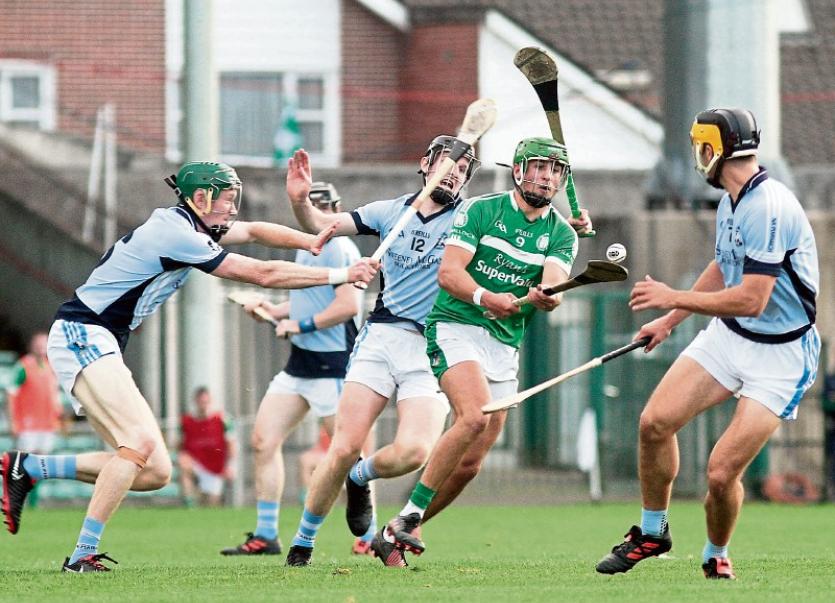 Action from Kilmallock v Na Piarsaigh in the Limerick SHC

THE line-up for the knockout stages of the Limerick SHC and the IHC will be confirmed this weekend.

There are six games in the fixture list for each that will determine which two teams advance directly to the semi finals and what pairings will play in the two quarter finals.

There are also relegation issues to be finalised.

All four are guaranteed progress in the championship but Sunday’s results will determine the semi and quarter finalists.

Patrickswell are the only one of the four that can’t reach a semi final. They lost last time out to Kilmallock and lost Cian Lynch to injury during that tie.

They face a Na Piarsaigh side with one foot in the semi finals. They were close to full strength in their win over Adare two weeks ago with all six All Ireland SHC winners on duty and Alan Dempsey returning from injury as a substitute.

The meeting of Kilmallock and Doon will see inter-county defender Richie English attempting to shackle Graeme Mulcahy, who scored nine points from play in the previous round.

Doon could be without fellow inter-county man Darragh O’Donovan through injury.

The first game on Sunday is the noon meeting in Claughaun of Adare and Ballybrown. Only a victory will stop Ballybrown from dropping down into Group Two of the championship for next season.

South Liberties and Murroe-Boher are in pole position to claim the final two quarter final spots. The Group Two duo have their destination in their own hands with victory over Cappamore and Knockainey, respectively ensuring they advance. Only the top table from this group will secure promotion to replace Adare or Ballybrown in Group One for 2019. Liberties hold the aces here due to an earlier round win over Murroe-Boher.

However, both Cappamore and Knockainey are chasing the victories that could secure their senior status and hold off relegation to the Premier IHC ranks.

Monaleen and Ahane meet in Cappamore and while Monaleen appear better positioned to advance, both would need favourable results elsewhere if they are to reach the quarter finals.

All three Group Two games has 1pm starts on Sunday.

In Group One, Dromin-Athlacca and Croom met in a what that will decide who advances directly to the semi final.

The losing side will be a quarter finalist.

St Patricks are best positioned to also reach the knockout stages with a win over Hospital-Herbertstown guaranteeing they advance. If the City side slip up, Knockaderry could progress with victory over Drom-Broadford.

In Group Two, Glenroe are leading the chase for a semi final spot, which they can confirm with a win over Newcastle West.

Like Glenroe, Granagh-Ballingarry are assured of progress but could be semi finalists rather than quarter finalists if the south Limerick side slip-up.

Effin play Granagh-Ballingarry with Nickie Quaid and Co chasing a quarter final spot and it would take a series of remarkable scorelines to deny them.

Claughaun-Old Christians and Hospital-Herbertstown will play in the relegation play-off unless they both secure final round group games victories this weekend.

In the LIT Limerick Premier IHC, there is also a full round of games this weekend.

There are a number of ‘back games’ to be played before the final round of games on October 6.

Bruff, minus the injured Paul Browne, are the current leaders, along with Mungret St Pauls – both do have the maximum five games played.

The top four reach the semi finals with just the champions promoted.

At the other end, just the bottom team are automatically relegated. Bruree currently occupy the bottom spot and this Saturday face a Kildimo-Pallaskenry side that are managed by a former player Chris Sexton.