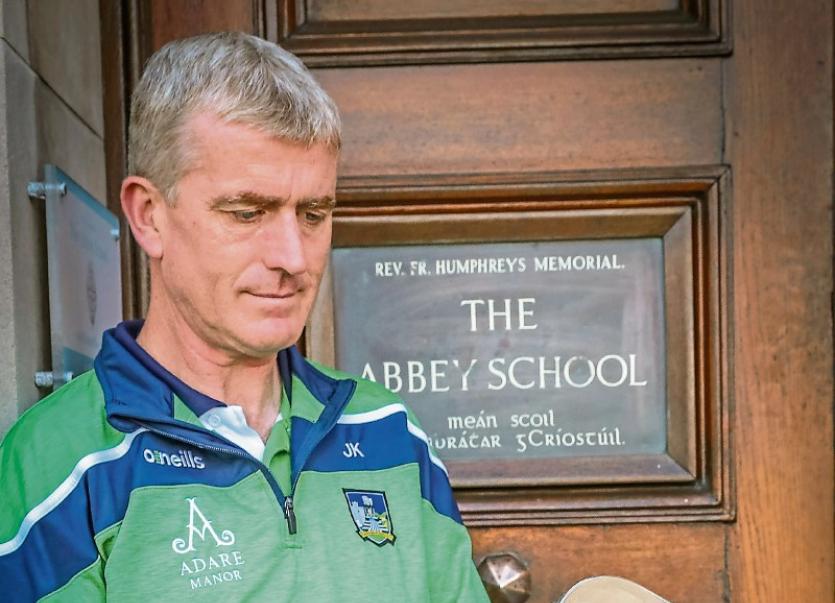 A couple of weeks ago I had the pleasure of sitting down with Limerick hurling manager John Kiely.

For more than twenty years I have done much the same with many winning managers in both hurling and football.

This was different and a great deal more pleasing because this time it was about my county and a Limerick man had managed to put all of the pieces in place to finally get Limerick over the line and end forty five barren years.

In the space of a couple of years John Kiely and his management team have delivered the Liam MacCarthy Cup. Like many others I hadn’t seen it happen in 1973 and this year was and will always remain, a special day for me.

I can only imagine what it was like for the players and the management. The team didn't win any championship game last year so by any standards, the achievement this year was significant for all involved.

The demands on players and management since Limerick won will bring its own pressures and how all involved manage that will be very important.

John Kiely was happy when we sat down, the morning had been busy. By the time I met him he had visited two schools and also made a special visit to someone that was ill and housebound.

I could see from looking at John Kiely that he was tired and showing the signs of the many demands placed upon him.

We had barely sat down when I mentioned such demands and he said,

“Look this needs to be celebrated, we are privileged to be witnessing the impact the cup has on people. The young are really excited but for the old it’s really very special and emotional.”

Since the time John Kiely took over as manager he set the tone of a man that is in charge. He is respected by many and from the players I have spoken to, he is held in very high regard.

He has a good relationship with them all but also keeps a distance and clear focus and everyone knows he has a firm grip. That’s a guideline that many great managers use and it’s good to see the same practice in place by John Kiely.

We weren’t talking for long when we moved the conversation onto the winning of the title and how the team had developed so much during the past year.

It would be easy for the Galbally man to take most of the credit but right away he said,

“To be honest I am a facilitator of a group of people and everyone of them worked so hard. That includes the people you see little of, the backroom people because in total we have twenty five people working with the squad. The contribution of Paul Kinnerk was most crucial. He pulled it together and made things happen and to be honest he was key to the whole thing. The work that he and Joe O’Connor did with the players was outstanding. The players worked so hard and took on board what Paul and Joe were doing and while it took a bit to get it all together I think we saw the fruits of all of their work as the year moved on. Brian Geary, Jimmy Quilty and Alan Cunningham also were really solid and their experience was also telling.”

The interview that went out on RTE Radio 1 lasted almost twenty minutes. Now, twenty minutes on national radio is a long time. It’s not too often we get the chance to hear the views of a hurling or football manager for that long.

John Kiely hit all of the right notes, he was cool, he was relaxed but most of all he reflected brilliantly the mood in Limerick and how much it meant to every GAA club and every follower of hurling in this county.

When we touched on the homecoming to his club and parish of Galbally I could see in the man how emotional it was. There were no tears but his body language and demeanour left me in no doubt just how much John Kiely loves his native place.

The love of ones parish and club are fostered in the early years and many people in Galbally played a part in developing the passion we see in John Kiely today. Limerick winning was what we all wanted but no one other than a Limerick man knew exactly what it meant to Limerick.

It took him a while to return to Galbally but meeting his own family, supporters and friends was very special,

“ It was great to get a chance to reflect on the game and in fact it was Thursday before I got to watch the game back. It was a very special moment when the cup came to Galbally. No one could remember if it paid a visit in 1973. Maybe the cup didn’t travel as much in those times. It was great to see the impact the cup had and that will stay with them forever. Taking the cup to our own primary school and then onto the Abbey CBS in Tipperary meant a great deal.”

“For people that have struggles in their life and for people that are very ill it’s chilling to see the impact it has on them. Older people understand how hard it is to win such a title and they have experienced many hard years.”

Limerick won no championship game in 2017 so what changed,

“ We looked at everything and we lifted the standards, we asked the players to do everything to the best of their ability and they did. They worked really hard and they showed the honesty we have seen all year back in September 2017. The boxing event was a great success it united the group. It challenged them to the core and they responded by challenging each other like never before. The boxing was a gamble, it could have gone south but thankfully all went well. When we went into training on the field in January you could really see the benefit of what they had done. We set ourselves some targets and bit by bit we were making progress. Winning that league game against Galway provided great lift for everyone.” - admitted Kiely.

John Kiely and all connected with the Limerick team have been busy but has the win changed him,

“No, I am privileged to be a part of a great set up. I am only part of it and many others have played just as important a part. I take great enjoyment from seeing the effect the win has had on everyone. It has lifted the entire county and I am happy to have played a part in that.” the school principal of Abbey CBS continued

I spent a good lot of time with John Kiely, I got a better understanding of his thinking, I could see the focus in the man, no drama, no self interest and many of those qualities have been seen in the Limerick players this year also.

I think it’s best to finish this part of my column with words from John Kiely,

“We must use the win to drive Limerick forward, we must make sure every primary school and secondary school sees the cup. That clubs and community get the benefit of the win. We must maximise this win for the long term good of Limerick GAA, a new drive, new energy that will see a long term return for hurling in our county.” That says it all.

A huge supporter of Limerick GAA Pat Barrett passed away last week. He followed Limerick all over the country and would have taken great enjoyment from Limerick winning this years All Ireland title. He loved reading the Limerick Leader and was a great supporter of this column. He was unable to attend the final but saw every puck of the ball on TV. Also last week Kildimo Pallaskenry lost a great hurling man in Seamus Gallagher. He gave great service to his club and also played with Limerick. To both families I offer my sincere sympathies.