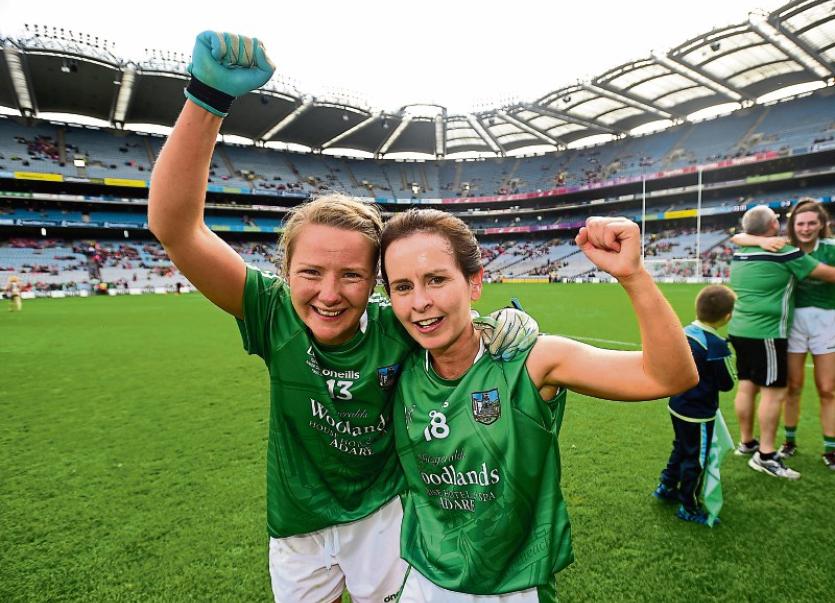 LIMERICK are All Ireland Ladies Football Championship winners for just the second time ever.

Both titles were in the junior grade and both final victories were over Louth in Croke Park.

Between 2010 and 2018 there were no survivors in the starting team but Olivia Giltenane and Dymphna O’Brien played in both games.

The duo are among five that now hold two All Ireland Junior Ladies Football Championship medals, along with Martina Giltenane, Catriona Davis and Siobhan Moloney.

In her 16th inter-county season Mungret St Pauls’ Olivia Giltenane was joined in the starting team by her sister Martina.

Limerick have played in three All Ireland finals ever and Olivia was involved in all three.

“It’s absolutely unbelievable and emotional. When I was here in 2009 when we lost I was gutted at the time and then in 2010 it was unreal. How does this compare? At this stage of my life I know how hard it is to get here,” said Olivia Giltenane outside the winning Limerick dressing room in Croke Park.

“Beforehand I wasn’t thinking of anything only focusing on the gameplan but this is surreal. Tina (Martina) is just back after having a baby, Sean Óg, and I was missing her all year” Myself, Martina and Rose played together for years and they were by my side growing up and I always had the older girls to support me. Even for the girls that played last year and the year before, you feel sorry for them, that they are not inside in the dressing room but this is for them as well because we are all the best of friends and there to support eachother always,” said Olivia, remembering those who is soldiered alongside and who didn’t taste success.

Limerick were relegated last year but the Giltenane sisters, Dymphna O’Brien, Catriona Davis and other experienced players remained loyal to the cause and have now secured a return to intermediate football.

“Football is my life and I don’t know anything different. Once November, December, January comes its football, football, football and I would be up in the gym in the Woodlands training away by myself. It’s paid off today - it’s just a determination and will to win. Last year was difficult losing matches but this is what it is all about - out there celebrating with all our families and friends,” said the former captain, who was named on the Lidl Team of the National League for the past three seasons.

“I can remember 2009 and I didn’t want that for the girls this year so I wanted for them to focus on the gameplan and luckily that happened today. They are a credit to themselves and they have worked so hard all year and it showed out on the pitch. With this young panel I knew we had to be leaders on this team,” she said of the surviving members of the 2010 winning panel.

“Out there they showed the determination that each one of us had and it’s unbelievable to see all our families, neighbours and friends up here in Croke Park to support us – its incredible,” she said.

Giltenane was selected as a corner forward but her role was to roam out the field as a third midfielder, allowing space for the Limerick attack.

"I have no13 but I am an out and out back! I am able to read the ball and know where players should be and the girls are brilliant because the gameplan worked a treat and that is a credit to all of them," she explained.