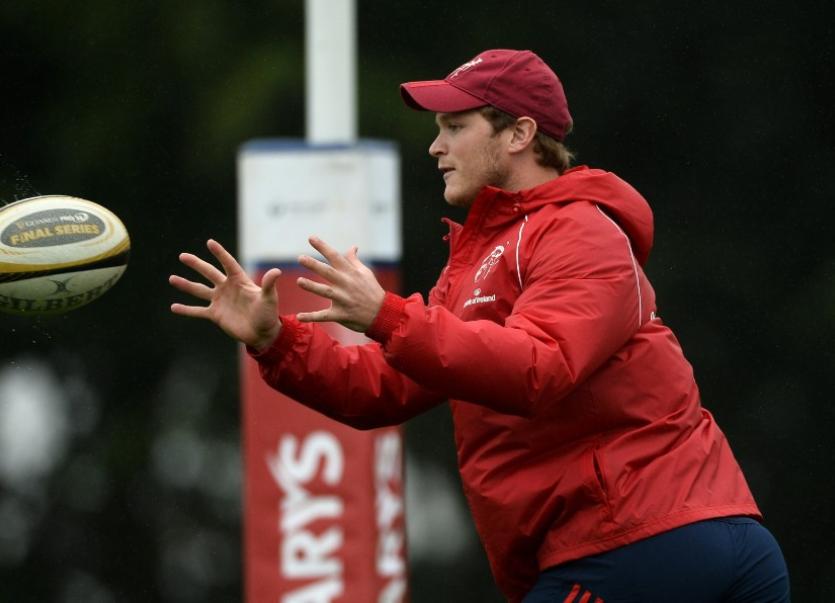 Tyler Bleyendaal is back in team training this week

MUNSTER have received a boost this week with confirmation that New Zealand out-half Tyler Bleyendaal has started his return to team training.

Bleyendaal has not played for Munster since February. The former Crusaders and New Zealand U-20 player required surgery in March in a bid to rectify ongoing symptoms with his neck.

Munster also report that Ireland scrum-half Conor Murray, sidelined at present with an neck injury, is ‘progressing well’ in his rehabilitation under the supervision of the medical department.

However, while there is positive news on Bleyendaal and Murray’s injury situation, Munster confirmed that tighthead prop John Ryan suffered an ankle injury in Friday night’s Guinness PRO14 bonus point win over the Ospreys. Ryan is to have a scan on the injured ankle and will be seen by a specialist to determine further treatment.

Another of Munster’s tighthead props, Stephen Archer, was treated for suspected concussion during the Ospreys game and will undergo the return to play protocol under the supervision of the medical department.

Munster report that scrum-half James Hart suffered a knee injury in the game at Musgrave Park and will be managed by the medical department.

Meanwhile, Stephen Fitzgerald and Sean O’Connor suffered concussion in the Celtic Cup on Saturday and will undergo the return to play protocol under the supervision of the medical department.

While Munster travel to the Arms Park on Friday night for a Round 4 Guinness PRO14 fixture with the Cardiff Blues, 7.35pm

The Munster ‘A’ side welcome Dragons ‘A’ to Musgrave Park in the Celtic Cup also on Friday, at 5.30pm.