Line-up to be completed in Limerick county SFC and IFC 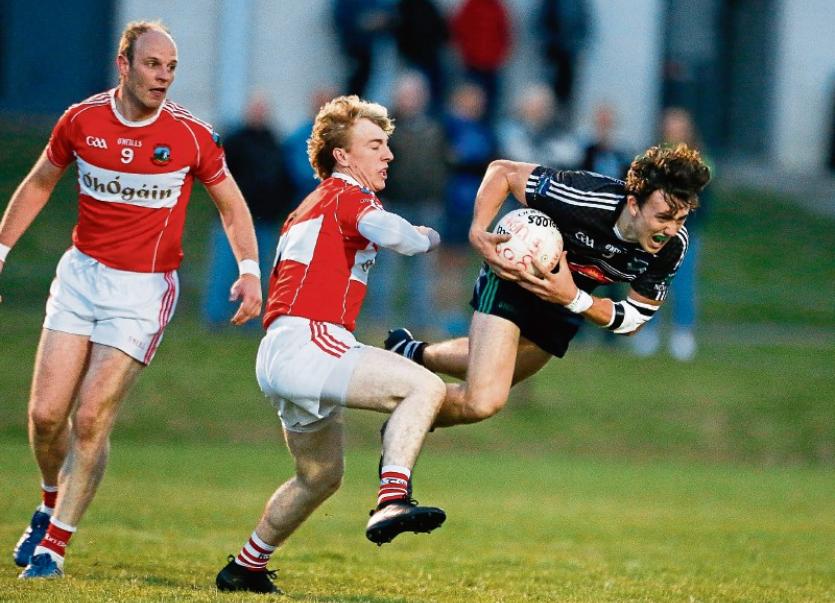 Table Toppers: Cian Sheehan's Newcastlewest (above on right) are top of the table in Group 2 of the Limerick Senior Football championship. They meet St Kieran's this Sunday in Knockaderry

THE line-up will be completed this weekend in the Limerick SFC and IFC with 12 games in the fixture list.

Adare, Newcastle West and St Kierans have 100% records in the Irish Wire Products Limerick SFC, while Rathkeale are the only side with four wins from four in the Griffin Coaches Limerick IFC.

They play St Senans, who are in pole position for a quarter final spot. But Ballylanders and Monaleen are also vying for the two quarter finals spot. A draw or win will guaranteed the Foynes-Shanagolden side progress. Indeed they can lose and still progress, pending results elsewhere.

St Senans were without Ian Ryan in their previous round win over Na Piarsaigh, while Ray Flaherty and David Finnerty were forced off injured during that Clarina tie.

Like St Senans, Ballylanders have their progress in their own hands when they play Na Piarsaigh with a win over draw moving the south Limericks side into the last six.

Na Piarsaigh, who haven’t used any of their six All Ireland SHC winners in recent games,  need a positive result if they are to move off the bottom of the group table and avoid a relegation play-off.

In Kilmallock, Monaleen and Drom-Broadford meet. Kingpins for a long number of years the losing side could find themselves in relegation trouble. Of the two, just Monaleen can force their way into the quarter finals.

The losing side will advance to the September 21-23 quarter finals.

The second quarter final place will be filled by either Fr Caseys or Ballysteen who also meet in a decisive encounter. A draw will be enough for the Abbeyfeale men to advance.

The third game in the group, Oola v St Patricks, is a relegation tie with the losing side into the play-off against the bottom side from Group One.

With Mungret getting a walkover from Bruff in an earlier round the final standings in this group could get tricky with scoring average no longer eligible.

Five of the six teams are still in the hunt for the three knockout places.

Pallasgreen and Athea are currently top of the table but Claughaun, Glin and Mungret all have aspirations on progress.

They play last year’s finalists Galbally in the final round. The south Limerick side are one of four teams battling for the two quarter final spots.

Also in contention are Galtee Gaels, Gerald Griffins and Castlemahon.

All three could also be in relegation trouble if Mountcollins get a result against Castlemahon.

Bruff are also confirmed to be one of the team’s in the relegation play-off to determine who drops down to the junior ranks for next season.