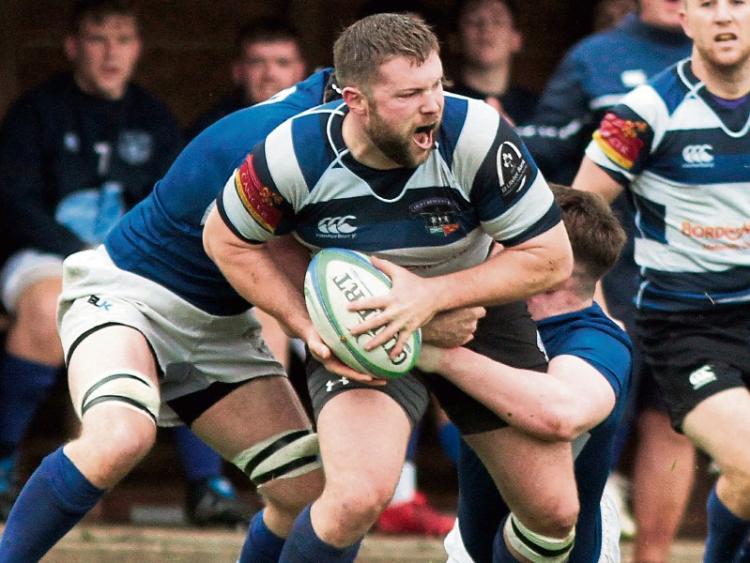 Kevin Doyle, Old Crescent, on the charge against Thomond in the Munster Senior Cup at Rosbrien. They host Highfield this Saturday

TWO Limerick clubs are in second round action in the Bank of Ireland Munster Senior Cup this Saturday, while Young Munster are engaged in a Limerick Charity Cup semi-final.

Old Crescent, fresh from their derby win over Thomond last weekend, will host Highfield in the second round of the Munster Senior Cup at Rosbrien at 2.30pm.

Meanwhile, also on Saturday, Bruff will travel to Cork to face Sundays Well in another Munster Senior Cup second round fixture. The winners of this tie will face Shannon in the quarter-finals.

Old Crescent outscored Thomond six tries to three in a 39-17 victory in their opening round Senior Cup fixture on Saturday last.

A standout performance from the Crescent pack, especially number eight Kevin Doyle and flanker Cian Reale, who not only displayed their prowess in both sides’ lineouts but also on the scoreboard with the pair scoring three tries collectively.

The sides had remained tied 12-12 at half-time, sharing four tries with Korey Browen and Evan Cusack touching down for Thomond and prop Donal Murphy and Brian Tuohy dotting down for the Rosbrien side.

Crescent powered clear in the second period, as Kevin Doyle scored his side’s third try ten minutes after the restart. Out-half Ronan McKenna later added three points to his side’s tally with a penalty making it 20-12.

Doyle’s second try and McKenna’s successful conversion put the issue beyond doubt. The winners added further tries through Shane Mulally and Cian Reale, while Thomond responded with a try from Eoghan Carr.

There was disappointment for UL-Bohs in the Munster Senior Cup last weekend, as the Annacotty side suffered a 23-16 Cup defeat to Cashel at UL.

Injuries forced UL-Bohs to dig deep into their reserve talent for this opening round tie and after a decent first half performance, the Red, Red Robins came up just short against a well-organised and competitive Tipperary side.

Most of the damage was done in the second quarter of the game and it was a well-worked maul by Cashel close to the home line that turned the tie in their favour in the 40th minute.

Three minutes earlier, UL-Bohemian had edged their way back from 13-3 down to trail by just seven points and had they held out until the short whistle, the result may have been different..

Trailing 20-6, Bohs needed first blood after the re-start, but it was Cashel who increased their advantage, opting for the posts after a series of scrums close to the home line.

That was to be the visitors’ last score of the game. Bohs attacked in waves with James Ryan constantly making good ground with some excellent carries and Cashel had to defend bravely.

In the process the visitors had two players sin-binned in the final 23 minutes. The pressure eventually reaped reward, Harry Fleming powering over near the posts and quickly adding the extras in the hope of another seven pointer that may have levelled the tie.

Unfortunately, time was not on their side.

In other news, Young Munster have been given a walk over by holders Nenagh in the semi final of the Limerick Charity Cup. The 'Cookies' will now face Garryowen in the final at a date and time to be confirmed.